Least Restrictive Environment (LRE) data provide important information on the extent to which students with disabilities are educated in the general education classrooms with their peers. When teams review their state, district, or school LRE data over multiple years, they can see trends that show growth, no change, or a decline in students with disabilities being educated in general education.

Reviewing a large amount of data can be overwhelming. Organizations are flooded with data. However, it is very common not to understand how to use the data to affect student learning. The activities in Step 1D are designed to help support the EILT analyze their LRE data in manageable ways, making sense of it, and then using it as they create an action plan.

The time to complete the LRE data analysis is usually 30-45 minutes. Depending on the organization and the data system, the challenge may lie more with accessing the LRE data than it is doing the group analysis once you have the data. As you gain an understanding about how to access data in your organization or you already know the process, you will be able to build in the lead time for accessing the data into the development plan.

Least Restrictive Environment (LRE) is an important indicator that describes the extent that all students with disabilities are educated in the general education classrooms with their peers. Federal law requires that:

(i) To the maximum extent appropriate, children with disabilities, including children in public or private institutions or other care facilities, are educated with children who are nondisabled; and

(ii) Special classes, separate schooling, or other removal of children with disabilities from the regular educational environment occurs only if the nature or severity of the disability is such that education in regular classes with the use of supplementary aids and services cannot be achieved satisfactorily (IDEA, Sec. 300.114

Data helps people understand what is happening in an organization in a very tangible way. While aggregated LRE data provides a “big picture” look at all students with disabilities in the system, it can hide patterns of uneven access to general education for subgroups of students. Reviewing LRE data disaggregated by disability category, race, English Learner designation, home language, and socio-economic status can identify inequities in access to general education.

The sub-groups of students that are very useful for identifying inequalities in access to general education for students with disabilities are:

* Gathering data for students with significant cognitive disabilities can be challenging because state and federal data are not collected specifically for this group of students. A few strategies for approximating the LRE for this group are to analyze data for (1) students who take the alternate achievement assessment; (2) students who have the disability labels of autism, intellectual disability, multiple disabilities, and deaf-blindness; and (3) depending on the details of how state and district special education finances are determined, disaggregating the LRE data for students who generate additional funding because of high need costs.

The Special Education Department is responsible for ensuring that LRE data is collected for every child who has an Individual Education Program (IEP) (LRE is identified on each IEP).

If you are at the school level, it is important to find out who in your district is responsible for special education data so you can request the LRE data. Many districts have data dashboards that are used to integrate data from multiple sources. Sometimes, special education data are integrated into these dashboards; sometimes they are not. If LRE is not available on a dashboard, pursuing the question to understand why and problem solve how to include this data is an important discussion. In the interim, access the LRE data by requesting the district to share a spreadsheet (aggregated and disaggregated by the various subgroups). This will keep the planning process moving forward.

Some smaller districts are unable to disaggregate subgroup data. Public data from the State Department of Education (DOE) can be useful for gathering some pieces of information. You can also reach out to the DOE to request the data you need. It is important to remember that the DOE only has the data that the district submitted, but the DOE may be able to provide it back to you in a different format that is helpful to the team

What activities can the EILT use to analyze the LRE data?

Prepping for the activity

The EILT in an urban middle school was able to access two years of K-12 placement data disaggregated by disability and race/ethnicity. To differentiate between students with autism who were also identified as high-functioning and those with intellectual disabilities, the EILT looked at additional data that cross-referenced the placement data for students with autism who also qualified for the alternate assessment. 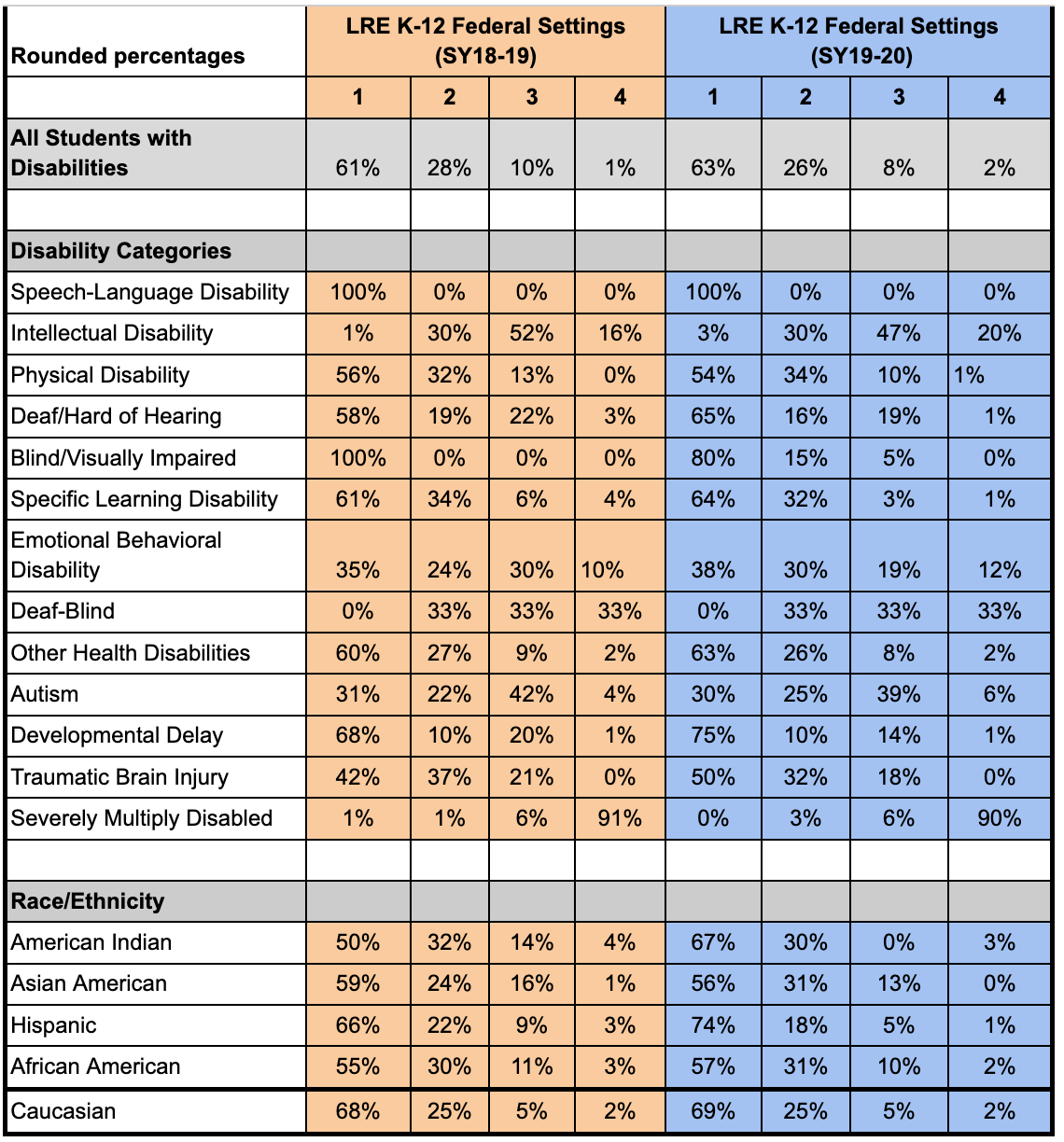 Move on to identifying initial strategies with key stakeholders for developing a commitment to an inclusive system of education.