Raising My Voice: On Being a Black Leader
Advocacy, Leadership, and Protest in Inclusive Higher Education

Cleo Hamilton completed the InclusiveU program at Syracuse University in 2020. He was the first-ever nonmatriculating student to be named a Remembrance Scholar, one of the highest honors Syracuse students can receive. Today, Cleo works in retail, has launched a photography business, and is a community activist in Syracuse, New York.

Beth Myers is a faculty member at Syracuse University and executive director of the Taishoff Center for Inclusive Higher Education. She lives in Syracuse, New York. 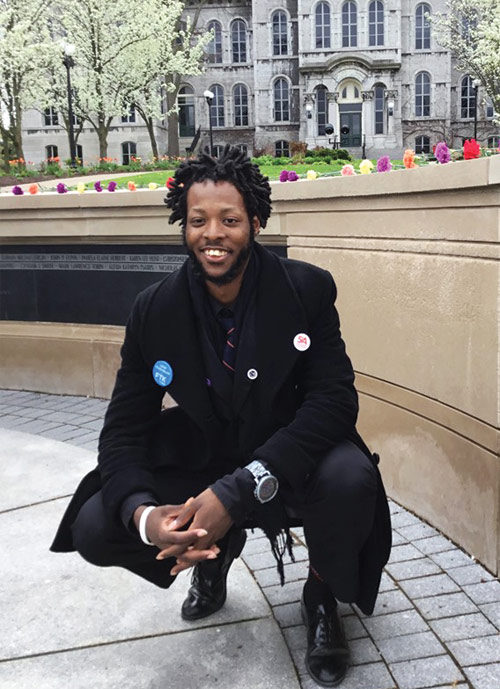 Beth: I know you were really involved at college. What kinds of things did you do?

I was part of Relay for Life as recruitment chair. I sent emails and told students about events.I joined the 12-hour walk-a-thon so I can help people. I lost my mother [to] breast cancer when I was 8 years old. Another one, you know, was OttoTHON. OttoTHON is a dance marathon event where we do our fundraising for the Children's Hospital. I was on a morale committee dance team.

Back in my sophomore year, another SU alumni told me about Student Association. Two of our other friends were the former president and vice president. She told me about how they do Monday night assembly meetings, and I came to them and asked if I could join, and they accepted.

And because of all of your involvement in these activities you were selected for a special honor in your senior year, what was that?

Oh yeah, I was selected as a Remembrance Scholar.

I really love that question. I answered essay questions about why I wanted to be the next Remembrance Scholar. I showed them my leadership and what I do for my community here in Syracuse, and they interviewed me and later they let me know I'd been selected.

Can you talk about how you got involved in the Black Lives Matter movement, and what your role was, and has been, in protesting?

Two years ago, I watched the news on CNN and saw a video of a man on the ground with four officers around him. I hate saying it, but the video shows George Floyd on the ground, beaten. And then the next day, my friend texted me about what was going down in downtown Syracuse.

What did you do?

My friend’s Facebook status said he was doing 40 days of protest. [A group of us] joined and we started protesting all over the city.We were holding signs that said Justice for George Floyd, and No Justice, No Peace. I was already part of [other] protests we've been doing.

One of my other friends who was also a fellow Remembrance Scholar, told me all about the Not Again SU sit in [part of protests against racism and anti-Semitism on campus.] We don’t want that to keep happening. I make sure I [protest peacefully].

I would say because [then] they [will] get their rights.

Are there ways that people support or help you when you're protesting?

A friend of mine, he's a leader of Rebirth SYR, he helped me do the protest. People drive me to protests or we ride together. People tell me when to go or what’s happening.

How do you help other people during protests?