Lillian Katherine Hope Hansen is a sophomore in the Riverhawks Scholar Program at Northeastern State University in Tahlequah, Oklahoma. The program is Oklahoma’s first comprehensive post-secondary education program for people with intellectual and developmental disabilities, begun in partnership with LeadLearnLive in 2018. 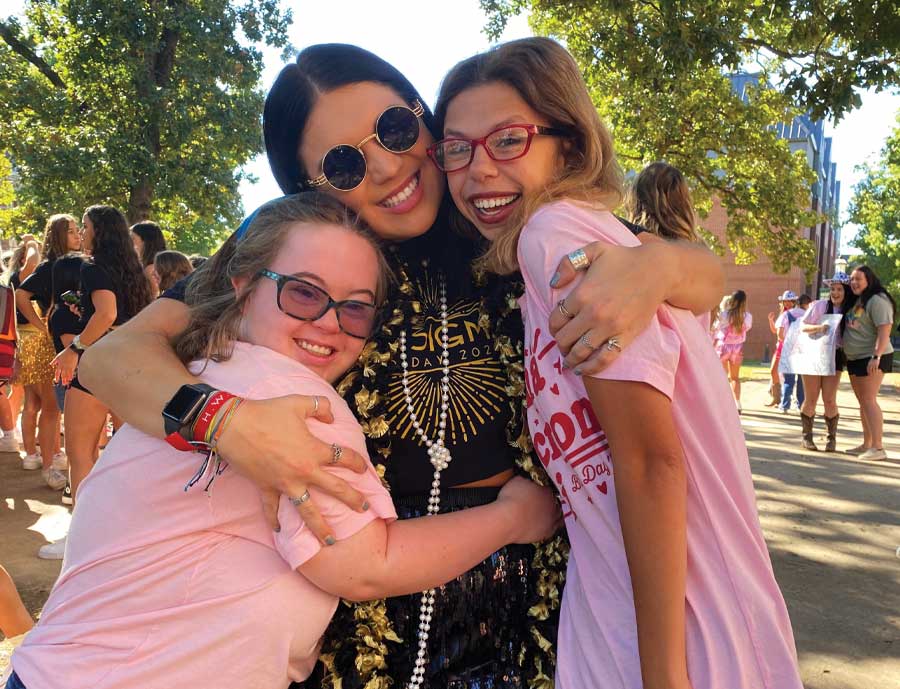 Sometimes I trick people with all my first names because I have so many. I actually go by Hope, which was my dad’s idea. He said hope is everywhere in the Bible and thought it would be great to have a daughter named Hope.

At first, I didn’t want to go to college because sometimes I need my alone time and I just felt safer at home. Today, I’m in my sophomore year and it’s crazy. In addition to my classes, I give campus tours and talk to prospective students as an ambassador for NSU. I work in the library, and am in a sorority. When I walk around campus people know me now and say hello. But when I first got here, I felt so small and out of place. Once I started classes, I felt so much better. I take Riverhawks Scholar classes for independent living skills, and they are awesome, but my freshman year, I have to admit, I was a little scared because I didn’t know what would happen the next day or where I was supposed to be.

Growing up in a big family and going to a lot of camps probably helped a lot in getting used to being around people at college. I have four biological siblings and my family adopted three more when I was 16, after we had been fostering for a while. My parents are such troopers. They take great care of all of us. They made sure I could go to camps through the Williams Syndrome Association, where I got to take music classes, go whitewater rafting, and a bunch of other fun things. Those camps were a life-changer in helping me learn how to be away from home. They opened my eyes to try new things.

I haven’t declared a major yet, but I want to go into healthcare. Ever since my best friend, my grandma, died, I’ve wanted to be a nurse. She passed away suddenly from a heart attack and I felt so bad for my grandpa. They were married over 50 years. Through a partnership Northeastern has with a local technical college, I’m applying to a certificate program to be a nursing assistant. They get paid a lot and it’s a pretty good job.

My grandma was actually with me when I was diagnosed with Williams syndrome in a Chuck E. Cheese restaurant. You won’t believe it, but that’s where it happened. This woman came up to my grandma and said, “Your granddaughter looks just like my daughter. Have you heard of Williams syndrome?” So, my grandma told my mom, and off we went to the doctor. Two days later, I was officially diagnosed. I was 6, and it’s a vivid memory. I remember standing next to that girl in Chuck E. Cheese, but I don’t remember the doctor’s office. Such a weird memory.

Williams syndrome is a rare, genetic condition that affects our DNA on Chromosome 7. In addition to intellectual disability, we often have depression, anxiety, diabetes, and heart issues. I’m trying to be very cautious about what I eat.

Being three hours from my family in Oklahoma City, it’s hard to get home as much as I should, but my parents come and visit. All my activities keep my schedule really busy. During sorority recruitment, there was a day when we started at 8 a.m. and didn’t finish until 10 p.m. I joined Alpha Omicron Pi, and we’re based on sisterhood, love, and friendship. We’re very secretive, and it’s really hard for me to keep secrets, but I do.

And oh, man, everybody recognizes me now on campus. I’ve probably made over 100 friends here by giving tours, or through the sorority, or just being in the Scholar program. I learned how to walk backwards because that’s how the cool people do tours. We have to memorize a script and I’m very good at that.

Life isn’t always easy. In 2018, when I was in high school, my doctors looked at my airways because I couldn’t sleep and I had to go through jaw surgery. I was bruised and looked like a chipmunk. My mouth was completely wired shut and we had to blend up my food, which was really gross. I wasn’t the same after that. It changed me completely.

All this experience has made me want to help people realize they are going to be OK at college, whether they have disabilities or not. Some people just don’t have friends in high school, and I tell them if they need anything, I’m there. I want to be the person who says, “I’ve got you.” Honestly, college is stressful, and I try to let them know that even if it’s stressful, there will always be people there for you.