Carlos Kaiser is executive director of ONG Inclusiva in Peñaflor, Chile. He may be reached at carlos.kaiser@onginclusiva.org.

The 2010 earthquake and tsunami were huge, even by Chilean standards. We are the most seismic country in the world and we have earthquakes every month, but this one registered 8.8 [on the Richter scale] and a lot of people suffered.

I was sleeping when it happened, around 3 a.m. At the time, I was 35 and had already lived through a lot of earthquakes. Growing up, they were scary, but you grew accustomed to the knowledge that disasters can happen any day of the week. You grow up learning that while you live in a beautiful country, nature seems to want to kill you. You just learn to deal with it.

This time, the amount of energy was so violent, it was like being in a truck going 100 miles per hour and hitting a train. It was impossible to stand, impossible to even move your body.

It was in this moment that the idea for ONG Inclusiva was conceived. I wanted to help. 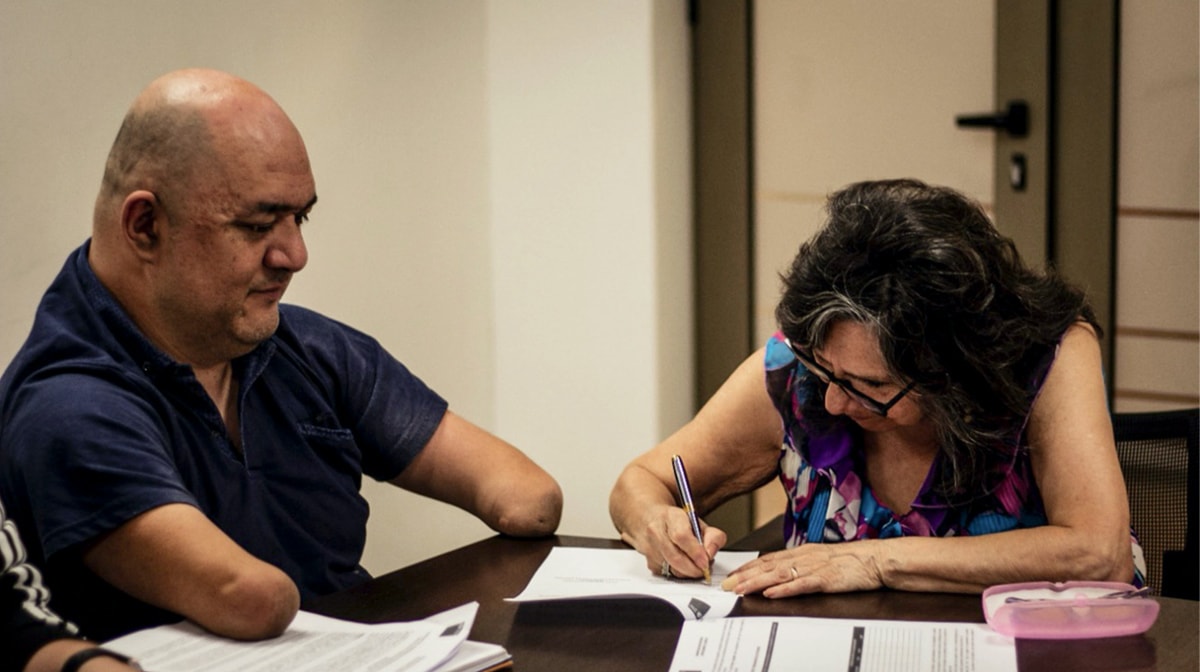 I come from a very old family in my city, Peñaflor, about 20 miles southwest of Santiago. My grandfather was a public servant here, and my family often told stories about volunteering and helping people recover after bad quakes. There were a lot of stories of helping, about being there for people in need. So, when we were without electricity for days after the 2010 quake, and the government was asking for volunteers to carry food and water to people, I was frustrated because I was born without hands or feet. I wasn’t able to bring food or drive a truck, or do any of those things. When my country called me, I couldn’t answer the immediate call. I wasn’t even able to help my own family clean up our house.

Gradually, though, I began to see ways that I could help with the rebuilding. In the early days, there wasn’t a clear policy for helping people with disabilities who had been affected by the disaster. There certainly wasn’t a plan for involving them in rebuilding the country. I had some training and experience in research methods and public policymaking, and I knew how local governments in my country worked. When you know policymaking, strategic planning, and research methods, you can put it into service for the country, and I did.

I had been collaborating with a university on disability and inclusion, and connected with them about writing a proposal called Building Back Better in Chile. At this time, the aftershocks were still coming; some were 6.8, 7, 5.5 on the Richter scale. I was trying to write my report and think about strategy among the tremors that kept coming. The proposal included some policies that could be implemented now and some that were longer term strategies. The university won a prize for it as the best regional social effort.

For about two years I continued working at a university and doing pro-bono consulting work for local governments that were trying to get certification as safe communities by the World Health Organization.

At one point my wife, Loreto Brossard, sensed that I was restless, and she asked me what I really wanted to do. I told her I wanted to work in disaster risk reduction full time, and she just said, “Let’s go!”

It was a real leap of faith to create an organization in a small town, but in August 2013 we got our certification as a non-government organization, and ONG Inclusiva was born (ONG equates to NGO in English).

We started without any funding, using our own money. We were looking around for funding opportunities and read about the Risk Award, which is given every two years at the International Disaster and Risk Conference in Davos, Switzerland. When we read about it, we had one week to create a project and apply for the prize. Then I spilled a hot cup of tea on my computer and it had to be repaired, so now we were down to four days. I decided to just speak from the heart and propose something as a person with disabilities myself that would not ask what they need – meaning people with disabilities – but what we need and what we can offer to society when a disaster strikes.

We had a community-based approach that was based on grassroots participation and networking with local authorities that I naturally experienced growing up in my small town. I was raised here. Even though the town is now around 100,000 people, the people at the core of this town all knew each other when we were kids. We all know each other’s grandparents and we have community and we work together. When we have emergencies – and they happen all the time – we know what to do because we have protocols. We don’t waste time on a lot of high-level meetings, we just get everyone to the places they need to be because there is no time to waste.

In 2014, we won the award at Davos, and that hands-on approach carries over to the work we are still doing today. As part of that award, in collaboration with the Peñaflor town council, we implemented a disaster response action plan and kits for the rescue and survival of all people, with and without disabilities.

This award led to a lot of networking, presenting at conferences, and developing training in disaster response. Last year, we won funding of $500,000 from the Metropolitan Regional Government in Chile to implement an inclusive risk management plan in 51 Chilean communities and one in Mexico. We will conduct online training for fire departments, local governments, other first responders, and people with disabilities.

Our next goal is to expand this training to more countries and promote our Inclusive Index Calculation Matrix, which is a methodological way to measure the level of inclusion a community has achieved in its crisis plans.

Essentially, the matrix provides a framework for assessing a community program, building, or event plan for accessibility, both in normal times and in emergencies. This prompts planners to think about accessibility as more than just physical access, and to do so during good times and bad.

The matrix touches on four key metrics of inclusion: autonomy, or the level of independence people with all types of disabilities have when accessing the place or event being measured; dignity, or the respect with which each person is approached and whether they are faced with situations that make them feel uncomfortable; security, or the presence of physical and social protective measures that prevent or decrease the risk of accidents or loss of functionality; and diligence, meaning a measure of whether the event or place allows people of different abilities to access the event, or leave it, in a reasonable amount of time and with a reasonable amount of effort.

Assessing these factors after actual emergencies as well as during non-emergency times tends to bring to light different areas for organizations to address.

We’ve done marvelous things in the last few years, and every relationship makes us stronger. Recently, we joined forces with the Partnership for Inclusive Disaster Strategies to present a self-paced, online training course in inclusive disaster risk reduction for emergency personnel. The course is available in both English and Spanish and we had 553 people from 18 countries complete the course.

At the same time, there are still a lot of people we aren’t reaching, and people with disabilities are now hearing all the familiar excuses for leaving us out of the discussion about the pandemic. Early on, in several countries, we saw people – even physicians – say out loud that they would not prioritize us in the distribution of respirators. A crisis shows everyone’s true colors.

To move ahead, we have to remember that inclusive disaster response is often just as much about respect as it is about physical logistics. We work for all disabilities and our board reflects that representation. We advocate for plain-language text in messages, appropriate communications with people with intellectual disabilities, graphics for non-readers, accommodations for people with vision impairments, autism, or other disabilities. When designing training for responders, we show them that we have different needs. Sometimes, this means universal design is not possible because needs sometimes clash with one another. We try to be as universal as we can, however, because we must leave no one behind.