Devastating, Haunting, Heartbreaking, and Inhumane:
Loss in the Time of Covid

Kim Keprios is executive director at Wilderness Inquiry in St. Paul, Minnesota. She may be reached at kim@wildernessinquiry.org. 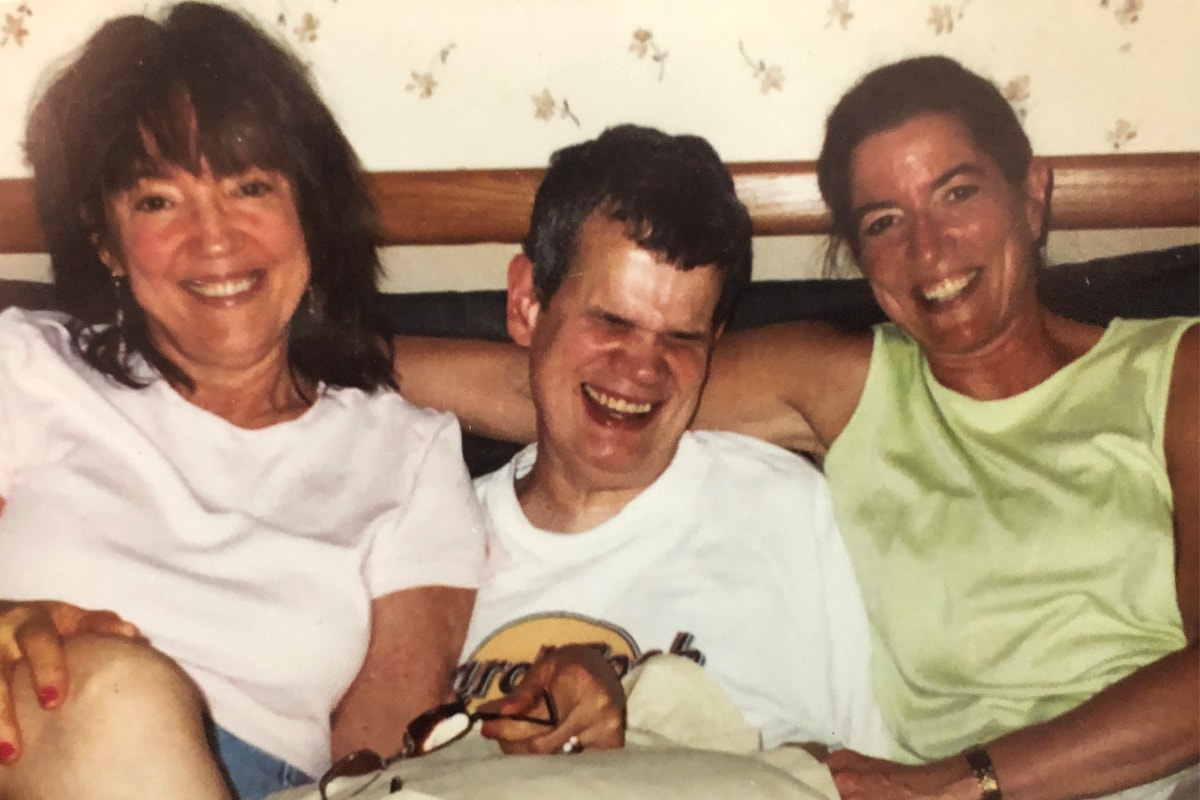 I got the call on May 18, 2020. My beloved brother Mike tested positive for COVID-19. I was stunned, not wanting to believe the words I heard. Shutdown restrictions at his group home meant I had not been able to visit Mike or bring him home for our weekend slumber parties for more than two months. I told staff members I wanted to be with Mike but was told, “Only if it gets to the end for him.” I curled up in a ball and sobbed. This couldn’t be happening.

Michael George Keprios, born in 1955 to Dodie and George Keprios, entered the world without eyes, and was later labeled as having intellectual and developmental disabilities. Advised to place their baby in an institution because he would likely never walk or talk, our parents ignored the doctor’s counsel and brought Mike home to grow up alongside his eventual four siblings.

There were no community services like we have today and no public schools for kids like Mike, just barriers and stares wherever we went. It was courageous for our parents to raise Mike at home, and they worked hard to ensure he had a good life. Mike did, indeed, learn to walk and talk. He had the Keprios chatter gene!

Mike was an extraordinary soul—joyful, loving, trusting, patient, tenacious, courageous, and smart. His sense of humor and comedic timing kept us laughing. He loved time with his family, slumber parties (slumber non-existent), traditions, holidays, Leave It to Beaver, the Minnesota Twins (win or lose), and the state fair. Music was a special passion, from grandstand concerts at the fairgrounds, to church music, country music in Nashville – Yee Haw!

He was a proud and valued employee of Old Chicago Pizza for 10 years.

Kep, Kepper, Miguel, Mikker were his loving nicknames, given from his adoring family, and he had his own for each of us. I will forever be “Kimmy Lou.” He was our glue, touching us all in unique ways that defined us as a family and individually. Mike touched my soul from a young age. I was aware of the opportunities I had that he didn’t, from going to school with the neighborhood kids to joining in recreation activities while he stayed home.

Mike was my guidepost early on in my choice of friends and in my decision to stay close to home for college and work. He planted seeds for my deep commitment to advocacy and human rights that led me on my career path to 33 years as the CEO for The Arc Greater Twin Cities, where I also met my spouse and closest life-long friends. Mike grounded me in what matters most. He loved unconditionally and showed me how to be in the present and laugh with abandon.

Now, Mike was quarantined in his room, with staff checks for temperature and oxygen. I called multiple times day and night to check on him, and when staff reported that his high temperature was now under control, I held onto hope.

On May 22, a staff member called with urgency in her voice. Mike’s oxygen had plummeted, and he was taken by ambulance to North Memorial Hospital. No staff members could accompany him because they could not leave the group home. Mike was alone. Blind, with intellectual and developmental disabilities, he was alone in an ambulance with its sirens blaring. He was alone in the emergency room. I was desperate to get to him.

Frantically, I called the hospital and received the same response every 10 minutes. “I am sorry, we do not have a record of Michael Keprios here.” It was more than an hour before I was able to talk to someone to confirm he arrived in the ER. I said I would be there in 15 minutes. “Visitors are not allowed,” came the response. I explained I was Mike’s sister and guardian, that he was a vulnerable adult, and it was essential for me to be with him. “I am sorry—there are no exceptions.”

Mike was moved to the COVID-19 floor and I called around the clock to get progress reports. I asked incessantly about visiting, moving up the chain of command in the system. Each time, I heard, “Sorry, no visitors allowed.” On May 23, there were many calls with the hospital staff and doctor. We were told there was a chance we could lose Mike, but the doctor ordered a drug, Remdesivir, that seemed to have promising results. Again, we hung on to hope.

After ample tenacity and desperate pleas, I received limited passes for family visits. On May 24, the doctor called to tell me we had better come to the hospital soon because he didn’t think Mike would make it. I dashed out the door, picked up my brother Chris, and went to the hospital.

Chris and I were eager – and afraid – to see Mike. Warned about the risk of being in the Covid unit, we put on protective gear and went in to see Mike hooked up to oxygen. He responded when we announced ourselves. We stood by his bed, stroking his hair, helping him suck on a sponge water stick and putting lip balm on his dry lips. We let him know we were there and loved him. Eventually, with tears and a sense of dread, we said goodbye, not knowing if we would see him again.

The nurses caring for Mike seemed kind and compassionate, but it was important to provide them with strategies to best support Mike and make him feel safe. Too often, staff members supporting Mike through the years forgot to talk with Mike, to share what they are doing and why, and the same thing happened in the hospital. He is blind, so these explanations are an essential need. They honored my requests for Mike, including playing country western songs on the radio.

While Mike was still responsive, the nurse helped us connect him via Zoom with our mom and sisters. They did their best to sound positive with him amid ample tears.

We connected again via Zoom on May 25, but Mike was non-responsive. We played his favorite songs, and all said goodnight to him.

On May 26, the nurse called to tell me Mike died. It was two months before his 65th birthday. Everything had happened so quickly. It was devastating, haunting, heartbreaking, and inhumane. 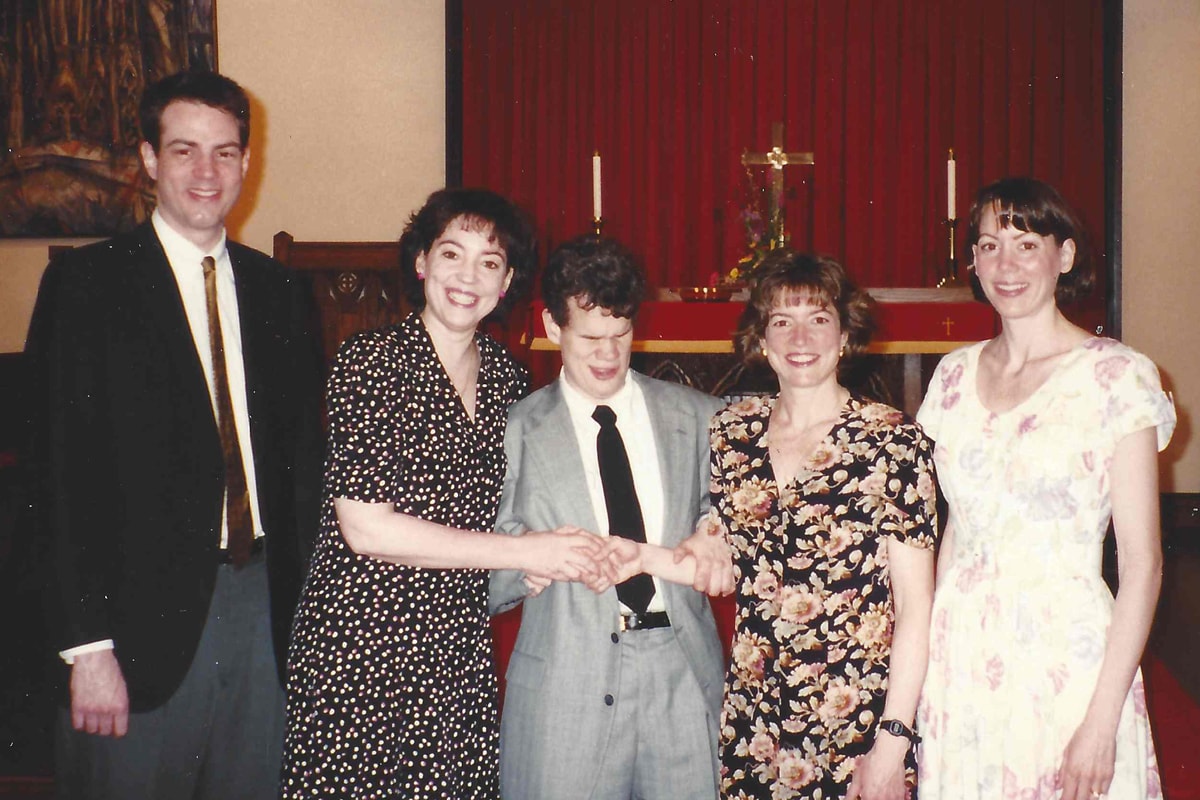 (Left to right) Chris Keprios, Candy Davis, Mike Keprios, Kim Keprios, and Kathy Smith celebrate a family baptism in 1996 at Lynnhurst Congregational Church in Minneapolis, where Mike, Kim and her family attended for more than 30 years.

Our mom, Dodie, had been in shutdown at her senior residence since March. I made arrangements with the funeral home so she, my older sister Candy, and I could see Mike before he was cremated. We were in protective garb, trying to follow protocol of no touching, sobbing and hugging as we stood with Mike. Gazing at his sweet face, he looked peaceful. I wanted to believe he was free from pain, challenges, and the frustrations that came with his life.

We couldn’t bury Mike’s ashes until late September due to the waiting list at the cemetery and some other bureaucratic issues. I arranged a service outside at mom’s residence the week following his death. With restrictions, it could only be Mike’s four siblings, mom, and her pastor. We sang, shared sweet and funny memories, ate treats, and said prayers. It was an intimate gathering, a chance to honor Mike and be together as a family with this painful loss.

Other than a brief encounter when I retrieved Mike’s belongings at his home and dealt with paperwork issues, there was no formal closure with staff members who supported Mike. I wonder how they are handling Mike’s death. Do they miss him? Do they get any support when the people they care for pass away? I know the system well enough to understand that once a person passes, the bed must be filled, and they are on to the next resident. I am not sure how much time anyone has to process these stressors and losses, particularly the direct support professionals on the frontline.

There are rules and regulations in the human services system that have, for the most part, been put in place for good reasons. Yet, in the midst of our crisis in losing Mike, I have felt another layer of sadness, frustration, and awareness of the de-humanizing practices that have evolved and continued for people who live with disabilities. These practices heighten their vulnerabilities.

Staffing shortages, schedules, low pay for long hours, and demanding physical and emotional work are the drivers of daily life for people with disabilities, despite good intentions. This was painfully evident from the first cruel and inhumane restrictions on family visits at the onset of the pandemic to Mike’s passing in the hospital. No one should have to experience this. As other states have addressed the restrictions with legislation, it is imperative that Minnesota and the remaining states follow suit. We must allow the presence and support of family members and guardians in situations of hospitalization, hospice, and other settings.

Grieving Mike’s death will be a long process. It comes in waves of sorrow, sweet memories, and emptiness, especially on the weekends. I am haunted as my mind replays the tapes of “should have, would have, could have.” My deep love for my big brother continues, along with the deep hole in my heart. Mike touched so many lives. I know his joyful and kind spirit lives on in the goodness of others, and he will always be with me.

When the mood strikes, I shall stomp my feet to a good country western tune, sing loudly and a little off tempo, and laugh with abandon. I will feel love towards all in my path—that will be my assurance he is near.

| In this webinar, Shruti Tekwani talks about grief issues for people with disabilities and their families.

| In 2012, Kim Keprios wrote about her relationship with her brother Mike as part of National Sibling Day.