Ken Reedy is a staff trainer at YAI in Westchester, New York. He can be reached at Reedyken @yahoo.com.

Chet Tschetter is co-editor of Frontline Initiative. Chet is a DSP and is also an education specialist at the Institute on Community Integration at the University of Minnesota.

Chet can be reached at frontline-dsp@umn.edu​​ ​ ​ 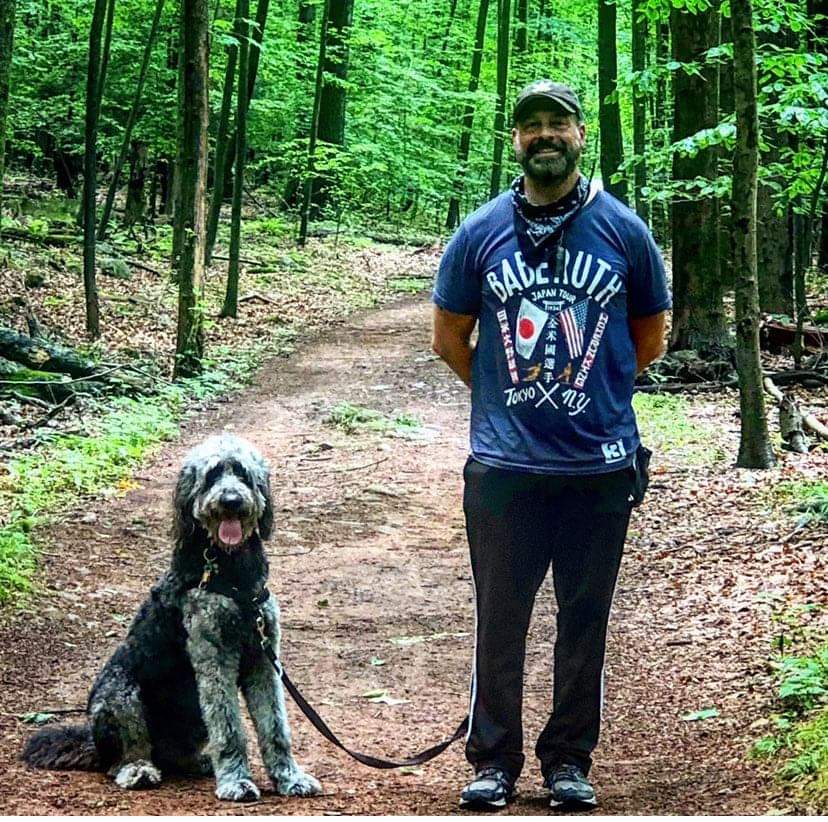 Monty and his person, Ken Reedy

When COVID-19 hit the United States in the spring of 2020, provider organizations that support people with intellectual disabilities had to pivot. State after state announced “stay at home” orders. These conflicted with many of the programs provided that emphasized community-based services. Providers of residential services needed to provide 24-hour support, seven days a week. Providers that support people though day programs were closed without notice. Those who provide supported employment may have found their employees displaced. Many providers worked together to keep Direct Support Professionals (DSPs) employed and to meet the needs of the people accepting support. Everyone needed to quickly figure out how to provide support while following precautions to keep safe from COVID-19.

As “stay at home” orders lifted, providers for employment and day programs who had been struggling to stay afloat were now faced with how to re-open according to their state’s guidance. Some providers didn’t survive and closed their doors permanently. Providers developed and implemented infection control policies and procedures, as they navigated the art of bringing back the people accepting services, DSPs, and other staff.

Ken Reedy has supported individuals with intellectual and/or developmental disabilities (IDD) for 25 years. He has worked nearly 22 of those 25 years at YAI. He started his career as a DSP. Eventually, he was able to use his knowledge and experience to become a staff trainer at a day services program. Budget cuts led him back to DSP work for about five years, and recently he was reassigned the role of staff trainer. Since COVID-19 hit, staff training came to a halt and he was assigned to other roles.

I sat down with Ken Reedy virtually. He had his best friend, co-worker, and beloved therapy dog Monty at his side. Before the pandemic, Monty went to the day services where Ken works daily. I was at my dining room table with my beloved dog, Gideon, at my side. With Ken’s expertise in direct support and as a trainer, I wanted to talk with him about DSPs being professionals.

On COVID-19 and Shifts in Services

The pandemic hit people at New York’s YAI hard. Thirteen people who receive services and two staff members died from COVID-19. This hit the staff hard. According to Ken, some staff who were repositioned to work for residences during COVID-19 decided that the risks of working as a DSP were too great for them and their families. They decided not to continue working as a DSP. When the day programs reopened, some day services staff who were repositioned to work in the residences decided to continue their work there. They decided not to return to the day services. Other DSPs decided not to come back to work at all. They made more money taking their unemployment benefits than working as a DSP. Ken does not fault the DSPs who made this decision.

FI: What distinguishes a job from a profession?

Reedy: DSPs need a certain level of expertise, qualifications, and training to do their tasks. I do consider it more of a profession than just a job. Some people have it; some people don’t. You could have someone who has a doctorate in special education. But when they interact with the people receiving supports, it’s just not there. You can have people who maybe just have a high school diploma and you see them working with people with disabilities. It’s like they’re performing magic. So, when I look at it being a profession, it’s because people have to have a certain level of qualifications and certain talents to work in our field that not everybody has. Some skills you can train, but for some, you just have it or you don’t.

FI: Is it possible to be a professional with the wages DSPs are paid?

Reedy: We know that DSPs’ wages are low and it is a critical issue that has a very negative impact on staff retention. I see it as philosophically being professional versus how society views and has decided to view our field. I think of anybody who can do this job and do it well, as a professional. The wages are absurd for what we’re asking DSPs to do. Now [in the COVID-19 pandemic] we’re asking DSPs to essentially, you know, risk their lives. Here in New York, there’s been a lot of media attention given to the fact that senior citizens who live in assisted living situations were put back into nursing homes after testing positive [for COVID-19]. This had dire consequences. But that was something that was, again, systemic. It wasn’t unique because that’s what we were doing with our individuals. To the staff were sending to work in the group homes, we’re saying, “Go risk your life.” We had a group home in Long Island that are a part of our agency that had eight residents. Five out of the eight died of COVID-19. We ask our DSPs to go work in these situations and the media hardly talks about them at all. Many DSPs continue to work in often-thankless jobs, in a place where they do not get regular raises, and honestly are risking their lives. DSPs are philosophically professionals, but we are not viewed as professionals. DSPs are not respected by the rest of the world as professionals.

FI: How important is it to consider DSPs “essential workers”?

Reedy: It is discouraging for DSPs when other professions are publicly thanked and the DSPs are left out. Most DSPs aren’t in this field of work for the attention, but it wears on DSPs. Many of the staff who work at YAI aren’t working the jobs that they were hired for. Those who were working at day services may now be working in someone’s home, or they may be working completely different hours than they were hired for. DSPs are blowing up their entire lives and there’s no media attention. They start to feel like this is a thankless job. It is a thankless profession. DSPs get positive feedback from the people they support. Most people who do this job and do it well are not doing it for the attention, but it’s nice to get it every now and again. DSPs just don’t get acknowledgement. When day services in New York were forced to reopen, it just added to that feeling of burnout. We’re trying to do things the right way and we just have to ask, “Is it safe to open?” It’s just a tough spot that the DSPs are in right now. I think the level of burnout, at least with the DSPs who I have exposure to, is at an all-time high.

FI: How does your organization approach hiring and training as you reopen services?

Reedy: I don’t know what is going to happen. Many people think that with this economy that applications are flying in, but they aren’t. People are not coming to our field. As we reopen, we wonder if we will have the DSPs [needed to fill open positions]. Staff training has been a challenge during the pandemic. YAI has provided virtual training to staff, but it just isn’t the same as face-to-face training. Providing staff with solid training is needed before they start to work with people who receive supports.

FI: What is your organization doing to recognize DSPs during the COVID-19 pandemic?

Reedy: We have done drive-bys for the group homes with sign of thanks and everything. Some of the supervisors went around and delivered baked goods to everyone who was working. There haven’t been any specific awards for anyone. I don’t know what the plans are yet for DSP Week in September, but I’m hoping that we put together some special things to do for the DSPs. A word of simple appreciation goes so far, and I do think that gets lost a lot of the time, especially with everything going on. You get so caught up with regulations, and how we do different things like how we do billing, that you don’t send out the basic appreciation. I remember a couple of years ago, someone just stopped me when I was making copies and said, “I learned something new from you today when I saw how you supported someone.” That had me flying high for a couple of weeks. I just don’t think that people realize how far kind words can go for people. So, driving by with a sign of appreciation can make a big difference, especially with such a lack of media attention. You guys [DSPs] are our heroes and just words of thanks mean so much. I wish it was more pervasive because it really goes a long way.

FI: What do you think we can do to help DSPs be more visible, more understood, and more respected in our country and our society?

Video from the Web version of this publication:

FI: What else would you like to say to readers of Frontline Initiative?

Video from the Web version of this publication: