There Isn't a Day I Don’t Experience Discrimination and Racism

Chester Finn works in Advocate Services at the New York Office for People with Developmental Disabilities in Albany, New York. Chester can be reached at chester.finn@opwdd.ny.gov

I was born at my grandmother’s house in Alabama, and I arrived a couple of months early. I weighed 1 lb. They put me in a basket and took me to the hospital. I wasn’t expected to live more than a few days. Today I am 67 years old.

I lived with my grandmother for the first 11 years of my life. I have been visually impaired my whole life, but I didn’t realize I was until later in my childhood. When I was young, I could read if the light was bright. I am fortunate to have really good recall memory which really helped me in school. However when I got to sixth grade, school got harder. Then I moved to Buffalo, New York where my parents lived.

Living in New York was very different than living in Alabama. Interestingly, it was hard for me because the schools were not integrated in Alabama. I had grown up in Alabama and I went to school with kids I knew and who knew me. Our school in the south was all black, and I hadn’t been around that many white people before coming to Buffalo. The public school I started at in New York didn’t have accommodations for me. This made school very difficult. Because of this, my parents enrolled me in the New York State School for the Blind. I lived at the school in a dorm. Of the 200 students, there were only four or five of us who were Black. I had to learn how to get along with the white kids. I learned Braille quickly and did well in school. The rules at the residential school are a lot different than rules today. When I was in school, I was involved in everything. I ran track and was on the wrestling and swim teams. I learned to do things for myself, to be more independent. I was taught how to live in the “sighted” world. Many of my friends who are self-advocates and have developmental disabilities aren’t encouraged to try things for themselves. 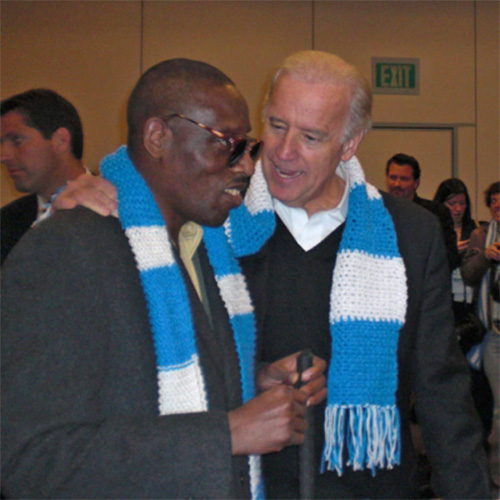 One accomplishment that Chester is most proud of is being appointed by former U.S. President Barack Obama to serve two terms on the board of the National Council on Disability (NCD).“I rode on Air Force 2 with Joe Biden (when he was vice president), my family, Martin Luther King Jr., and his son,” Chester says. “We talked about how to be more effective with disability policy and civil rights.”

I became more aware of ableism when I came to New York, but I can’t remember a time in my life when there wasn’t some type of discrimination or that I got the feeling that something was wrong due to my color or my disability. I was aware of racism as a young boy growing up in Alabama. It was during the mid-1960’s when a significant life event happened to me. I begged my grandmother to let me go to the store to get her a fish sandwich. She was worried I would get hit by a car, but I assured her that I knew how to get to the store and back home again safely. Finally, she let me go. I went to the store, and I was trying to figure out where to go in. Everyone was going in one door, so I went in. But the person running the store yelled at me. He called me the big “N” word. I thought, “That’s not nice.” The other people in the store yelled back and said, “That’s not nice, he is only a kid. He came in here to buy something.” But the store owner shouted, “I don’t care, ‘Ns’ don’t come into this part of the store. They go around to the back.” At the time, I didn’t understand what he was talking about. He asked me, “What did you come in here for?” I said, “I came to buy a fish sandwich for my grandmother, but you don’t seem like a nice man. I will not be buying a fish sandwich today.” I left the store and went home. My grandmother and I told everybody we knew what happened. Everyone said things had to change. People got together. They didn’t just talk about what happened, but also decided to take action by boycotting that store.

Speaking up for change

I always watched TV with my grandmother and was interested in politics and civil rights. I would ask a lot of questions of my grandmother and my teachers about what was going on in the country with civil rights. I told them that I was going to be doing civil rights work someday. They asked how I knew it, and I said, “I have a mission.” Then they asked, “How did you know it? You are just a child!” I told them that God told me. Being involved in politics and voting in each election has always been important to me. When I talk with others, especially other self-advocates and people of color, I tell them to speak up!

When I speak to self-advocates, I talk about taking responsibility for their lives. I tell them, “It doesn’t help anyone if you don’t speak up for yourself to the right people. It’s your life, and if you won’t speak up for yourself, who will?” People with developmental disabilities can learn how to do things for themselves. We can learn how to cook and do so many other things. We ask to be shown respect by teaching us how to do things. Let’s take the word “help” out of the conversation when we talk about what a DSP does. There is a difference between helping someone and supporting or teaching someone. I appreciate making choices and learning for myself. When someone teaches me how to do something, I feel respected.