Low Wages and Racial Disparities in the Direct Support Workforce

Julie Kramme, Julie Bershadsky, and Sandy Pettingell are  researchers at the Institute on Community Integration at the University of Minnesota in Minneapolis, MN.

At the University of Minnesota’s Institute on Community Integration (ICI), we have done research with the direct support workforce for decades. Highly skilled direct support professionals (DSPs) do critically important work in supporting people with intellectual and developmental disabilities (IDD) to live and work in the community. But we don’t need to remind you of this – you live it every day!

Early in the pandemic, we heard many stories from DSPs about how their work had changed. We and the National Alliance for Direct Support Professionals (NADSP) knew it was important to ask DSPs from across the country to report on their experiences to make sure we could communicate effectively about the issues they faced. We developed an online survey and collaborated with NADSP to reach DSPs nationwide. The resulting data summary was intended to inform effective policy and practice decisions about what is needed and to better prepare for potential future waves of this or other pandemics. The initial survey was launched in April 2020. A six-month follow-up survey was launched in November 2020 and completed by 8,846 participants from across the country. Data cited in this article are from the six-month follow-up survey. We also completed a 12-month follow-up survey that was fielded in June 2021; it focused on vaccinations, return to work, and social inclusion. We published the results of these surveys in a series of reports as well as in the last few issues of Frontline Initiative. You can read those articles here and here.

Importantly, it has been shown that people with IDD are at higher risk of getting infected with COVID-19 and dying of it (Gleason et al., 2021). During the pandemic, many DSPs were providing care to people with IDD who had COVID-19. This put the DSPs at high risk every day. We were concerned to learn that many DSPs were not paid more money during the pandemic, even when other essential workers were paid more for working during this national crisis. In our survey, less than a third of respondents received higher wages due to the pandemic.

DSPs who support people with IDD are predominately women (83%) and are often people of color and recent immigrants. DSPs bring diverse experiences to this work. We also know that other industries have documented disparities in wages when looking at race and ethnicity (e.g., Frogner & Schwartz, 2021). This means that, on average, a worker who is from one of these non-White groups would be paid less for the same work than a White worker would. We wondered if we might see similar trends in the data we collected if we looked at race differences in DSP wages. Our preliminary analysis showed there may be racial disparities in hourly wages, household income, and additional hours worked.

The majority of DSPs who responded to our survey identified as White (73%). Seventeen percent identified as Black or African American. Five percent identified as two or more races, 2% as Native American or American Indian, 1% as Asian, and 2% as another race we hadn’t listed. Because the sample sizes were small, we had to collapse these last groups into one group that included DSPs who are Native American or American Indian, Asian, two or more races, or another race we hadn’t listed. Our findings of looking at some of the differences by race are summarized in the infographics. 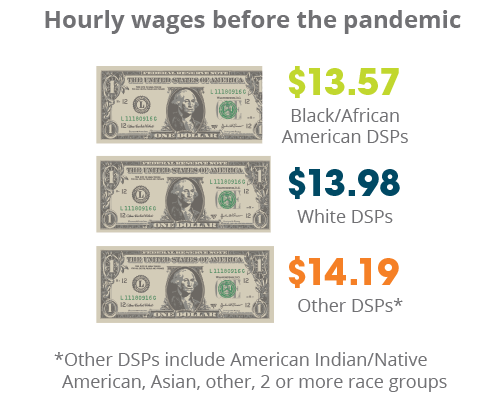 We asked DSPs to report their annual household income. The majority of DSPs (53%) came from households earning less than $40,000. When we looked at differences by race, more Black or African American DSPs and other racial groups had household incomes below $40,000 than White DSPs.

The differences we found in wages paid, household income, and additional hours worked need more investigation as we do not have specific information about the reasons for these differences. It is essential that disparities based on race are addressed to ensure that all DSPs are supported in their careers.

It is critical that systemic challenges of high turnover, high vacancies, low wages, disparities in wages among racial groups, and the effects these challenges have on the lives of people with IDD be addressed through policy change. This includes: