Supporting Paul in Employment and Retirement

Gregg Wilson is Day Program Director at Community Living Alternatives in Aurora, Colorado. Gregg can be reached at Gregg@clainc.org. 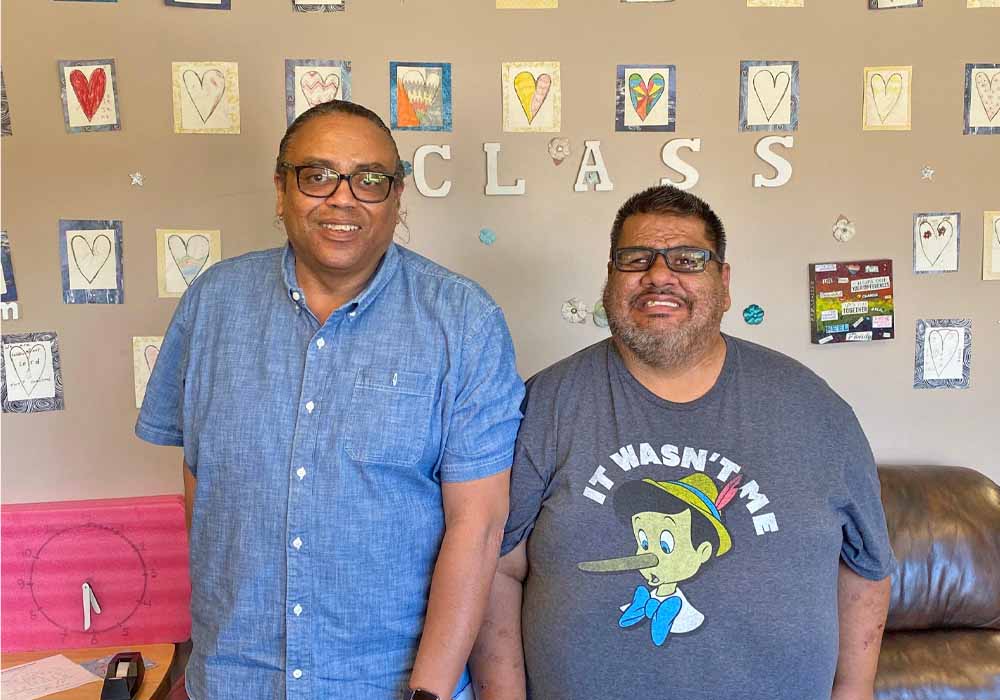 Gregg and Paul have known each other for over 20 years.

In 2001, I met Paul on my first day as an employment consultant (job coach) and direct support professional with Community Living Alternatives (CLA) in Aurora, Colorado. He was the first individual I met. At the time, Paul was working as a custodian at the Denver Art Museum. My role as Paul’s job coach was to help him maintain his employment and to be the liaison between Paul, his immediate supervisor, and the directors of his division.

Paul worked at the museum for approximately 20 years and loved his job. Most of my visits at the museum were uneventful, with me being there only to ensure that Paul had what he needed to perform his duties as expected. Once he learned to do his job, he performed it meticulously and took a lot of pride in his work.

Paul worked at the museum for approximately 20 years and loved his job. Most of my visits at the museum were uneventful, with me being there only to ensure that Paul had what he needed to perform his duties as expected. Once he learned to do his job, he performed it meticulously and took a lot of pride in his work. However, not every day was a good day for Paul. In my role as his job coach, there were times when I would need to speak with his direct supervisor and others about incidents or other issues that Paul was involved in. But more often than not, he and his colleagues relied on each other to get their jobs done well. That fact that Paul had a job coach who was also his biggest advocate may be one of the reasons he was able to work at the museum for so long. In fact, he worked at the job long enough to retire and receive a pension from the City of Denver. But the fact that he loved his job was the main reason he was able to stay at the museum for so long.

While he worked at the museum, Paul was generally easy to assist and fortunately, was usually focused on his job duties. It may have been good fortune for me to “shadow” Paul while he worked, because I was able to see parts of the museum that others may not have access to, and it was mostly during the morning hours before the museum opened. However, when the city decided to use a private company for custodial services, Paul and his colleagues all lost their jobs at the museum.

After he left the museum, I helped Paul obtain a position as a custodian with a local school district. I was happy to help Paul identify the type of new job he wanted, search for open positions, apply for those positions, interview, and again act as a liaison with his new supervisors. Unfortunately, we couldn’t find reliable transportation to work, so Paul had to give up that position. At that point, Paul decided to retire from work since he could access his pension.

In retirement, Paul was still looking for opportunities to be social and connect with others. In September 2013, CLA started a day program. With Paul being the first person who I was assigned to support on my first day, it was a no-brainer that Paul became the first member of CLASS Day Program, of which I am lucky enough to now be the director. Paul actively helps in our greenhouse and learned to use Zoom to meet regularly during the pandemic. C.L.A.S.S. (Community Living Alternatives’ Specialized Services) day program is an education-based program, where people focus on learning new skills, such as math, spelling and grammar, life skills, improving computer skills, skills for interacting with others, and community safety while participating in activities around town.

To this day, Paul and I have a close relationship. Paul still comes to me for advice. I have watched Paul thrive over the years and I also have a great relationship with his immediate and extended family. Paul has been a part of my life for more than 20 years, and I hope we can keep our friendship going for another 20 years.

In my role as an employment consultant/job coach, I was very fortunate to assist Paul and other people with finding and maintaining employment. I have been lucky to meet a very diverse group of people, see how many businesses operate, and meet great people with and without intellectual and developmental disabilities. All the people who I support want to have the same job opportunities that everyone has. I am honored to have a positive influence in their lives, and to help so many people to find jobs that they enjoy.