Under the Mask: A Drastic Career Change 20 Years in the Making

Mary Alexander is a direct support professional/senior job developer at The Arc Mid-Hudson in Catskill, New York. Mary can be reached at mary.alexander@arcmh.org. 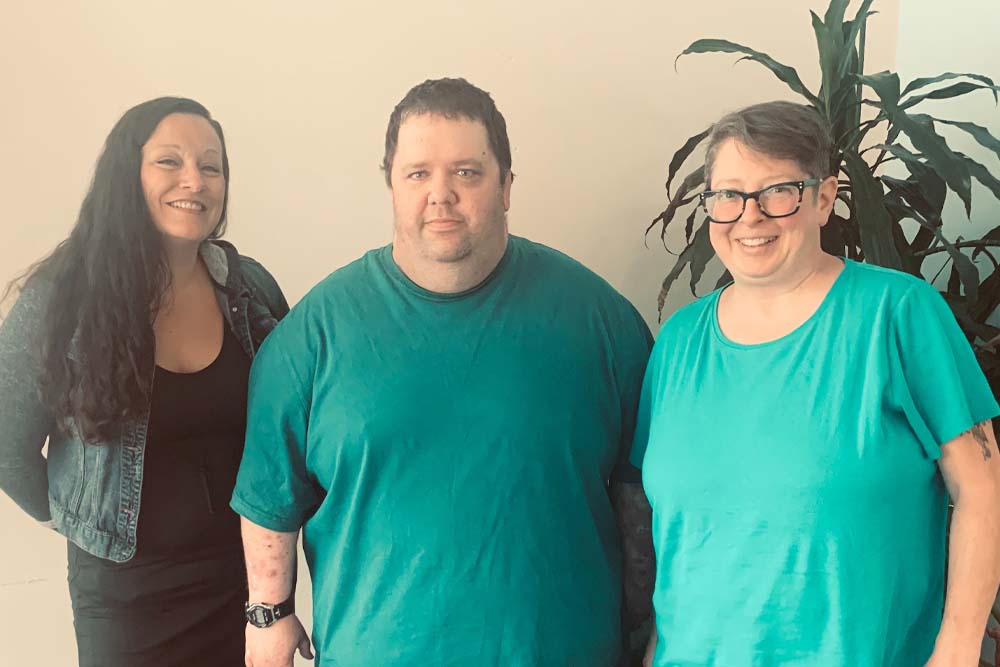 Mary with David and his job coach, Kim

A referral landed in my inbox right as the COVID-19 pandemic was sweeping through the nation. The pandemic was changing the way we delivered services as fast as we could adapt to new regulations. This was before we realized how COVID-19 would affect employment services for so many people. The referral was for a person named David who had worked for the last 20+ years at a fast-food restaurant located off the New York State Thruway. He was looking for a new job that would allow him to use his bachelor’s degree in industrial engineering. When he was referred to us by ACCES-VR (New York State’s program to fund employment supports). His goal on his referral was listed as, “Mechanical Engineering Technician.” During the COVID-19 pandemic, a major career change with a long break between graduating college to a job in his chosen field seemed like a challenge with many barriers to overcome. I wondered how he would network within a new career field while the entire country was social distancing.

He was certain about one thing: He didn’t want to work in fast food anymore. He wanted to build a respectable career that used the skills he learned in his engineering degree.

David and I first met via phone when I was providing remote services, as allowed during the pandemic. He told me that he graduated from college in 2005, but had never used his education or his degree for employment. He had been working as a cook in a fast-food establishment. But he couldn't stand wearing a mask on the job and was worried about interacting with so many people at work. David has severe anxiety. He was becoming anxious about contracting the virus. It was hard to breathe in that environment while wearing a face mask. David felt smothered and his anxiety was increasing tremendously. Due to the nature of his disability, he was concerned about the job search process and advocating for himself. He had communication barriers that prevented him from finding employment in the past. He was certain about one thing: He didn’t want to work in fast food anymore. He wanted to build a respectable career that used the skills he learned in his engineering degree.

The first step was to gather a list of potential employers. We wanted to identify a business that would give David an opportunity to come in and assess his skills. A 20-year gap from learning a skill to applying it in a real-world setting seemed like a challenge. This was especially true in this career field that requires a particular set of skills and specific knowledge. I supported him while he updated his resume. I talked with him about professional workplace expectations, such as dress code. He realized he needed to update his business casual wardrobe. We practiced interviewing. As a direct support professional (DSP), you know how important it is to prepare for real-world situations. David is comfortable working one-on-one with someone, but when faced with a new person and questions, he gets lost for words even when he knows the answers. I supported him as a liaison between him and his prospective employer to facilitate communication as he transitioned into work. This proved essential to his success.

After a couple months of searching, a worksite (an architecture firm) asked for David’s resume. They agreed to have him come in for an assessment. The firm was experiencing an increase in sales and productivity due to the COVID-19 pandemic because many people were buying properties in upstate New York. The firm was so busy, in fact, that they were open to hiring him part-time if he could replicate the drawings they needed into the computer-aided design and drafting (CAD) program used in the architecture field. David reported that he was unsure, but he believed he could do it. While many businesses were struggling and even closing due to COVID-19, the influx of people moving into the region had increased this market. They also allowed David to wear a face shield while working, which was a huge relief to him and his needs.

After 16 years without seeing the program since graduating from college in 2005, David remembered what he needed to do.

During the assessment, David was given some blueprint drawings. He needed to enter them into the CAD program and with just a short list of cheat codes. He was able to recall most of what was asked of him. He completed the work in the allotted timeframe. After 16 years without seeing the program since graduating from college in 2005, David remembered what he needed to do. He met the architects and impressed them with his knowledge. After decades away from this field, his skills and abilities were sharp and helped him meet his goal of getting a job in electrical engineering. He was able to jump right into the new career he had been waiting on for many years.

Why had David waited so long to make this leap into a career that utilized his skills and talents? David said he had wanted a part-time job while going to college, and he ended up staying there when they offered him a full-time job with benefits because he believed the barriers related to his disability were too big to overcome. At that time, he was not working with a vocational rehabilitation agency to overcome barriers. He needed some support as he made a change. Now David is building his career and making progress with his employment goals. He wants to increase his skills by learning more about materials and how to input architectural details into CAD. He currently works two or three days per week and would like to work full time.

Since David’s placement with the architecture firm, he has continued to build skills and increase his knowledge as a part-time draftsperson. He has worked there for over a year. He continues to set goals and work on them with his job coach, Kim. He eventually would like to work full time and scale back the supports he needs. Due to the independent nature of his work, David received most of his support in building skills outside of work. David’s care manager has applied for a grant to buy a computer so he can practice his skills outside of work while learning new techniques in CAD programming. With his coach, he has been researching online programs to continue his education and fine-tune his knowledge while increasing his independence. David is a success story, and also a model of how we can coach people to advocate for their visions, use and increase their skills and talents, ask for promotions that interest them, and build confidence as they live out their dreams.