A Duty to My Art

Peg Schneeman Reagan , mother and representative of the visual artist Jimmy Reagan, lives in Mendota Heights, Minnesota. She may be reached at margaretreagan@comcast.net. 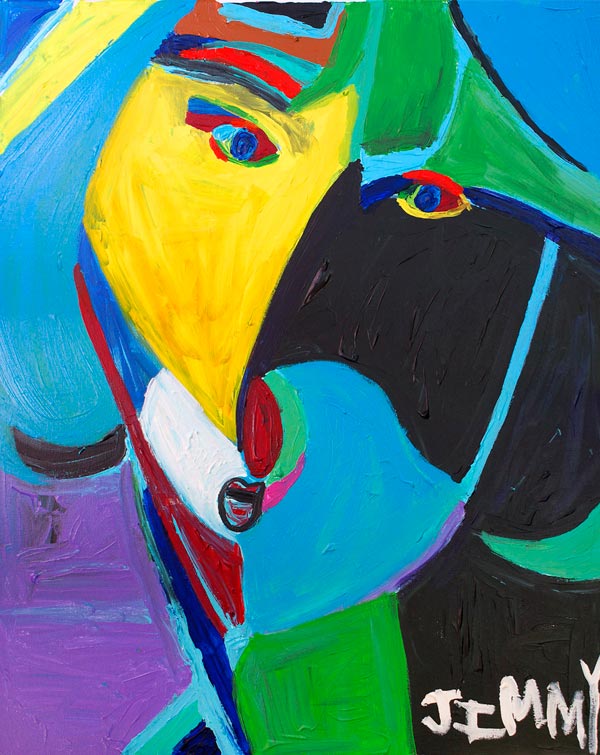 Girl from Egypt, paint on canvas, by Jimmy Reagan.

Since Jimmy’s diagnosis of regressive onset autism at age two and a half, he has memorized movie lines, using them as functional language. Curious, I googled “I have a duty to my art” and didn’t find a corresponding film or source for this line. They were Jimmy’s own words. Words that were very hard to come by. I let the power of these words wash over me, his own words in his own authentic voice were a rare and blessed treat. This seems to be his way, somewhat unassuming, until in a moment, he commands your attention and makes himself heard, leaving a lingering sense of cheekiness as he slinks off.

Jimmy is the middle of my five children, who are separated by only five and a half years from oldest to youngest. He was born on July 6, 1993, a healthy, happy baby. His pediatrician encouraged us that Jimmy was developing normally and was actually ahead of schedule; we knew he was smart and had high hopes for his future. He was engaged and interested in everything, especially his two older siblings. As a Christmas gift for my husband, I hired a local artist to create a drawing of the three kids when Jimmy was about 16 months old. The artist came to our home to photograph the children interacting together so he could capture their personalities. When the session ended, he said that in his 25 years of working, he’d never seen a child with better eye contact than Jimmy. “He’s so engaging,” the local artist said. I could never have predicted how profound and impactful his comments would become for Jimmy and our family. Around the age of 18 months, Jimmy became chronically ill. One Sunday, he ended up in the emergency room with a 105-degree temperature, double pneumonia, RSV (respiratory syncytial virus), and infections in both ears. This was the beginning of hundreds of doctor visits for infections of all kinds. He seemed to be falling away from us. Over the next year or so, Jimmy lost the words he had and he could no longer say my name, a devasting experience as a mother. Momma was gone. What happened? His once-happy disposition and engaging, captivating eye contact left him. He isolated himself, spending much of his time with books rather than his beloved siblings. I could show him how to do a task, but I couldn’t use words. It was as though I was speaking a foreign language. It was clear that the best way to communicate with Jimmy was visually. In April of 1996, we received the autism diagnosis. At the time, there were many road blocks preventing us from securing the care and services Jimmy needed. We struggled to get Jimmy even basic healthcare. Dental care was a complete loss. This made no sense to me. It was a call to action. My husband and I took initiative and co-founded the University of Minnesota Autism Clinic in 2000, and Jimmy was their first patient. We hoped for answers for his chronic illness and wanted to secure resources for not only Jimmy, but other families facing the same situation. Fast forward to December of 2008, Jimmy was too sick to be in school. He was 14 years old and weighed 62 pounds. His older brother was convinced Jimmy was dying. Upon further investigation, doctors at the University discovered that he had multiple serious infections in his gastrointestinal system. Jimmy became homebound, and we brought a tutor into our home. Because verbal language was challenging and frustrating for Jimmy, his home tutor suggested that we use visual tools, such as art, for his curriculum. 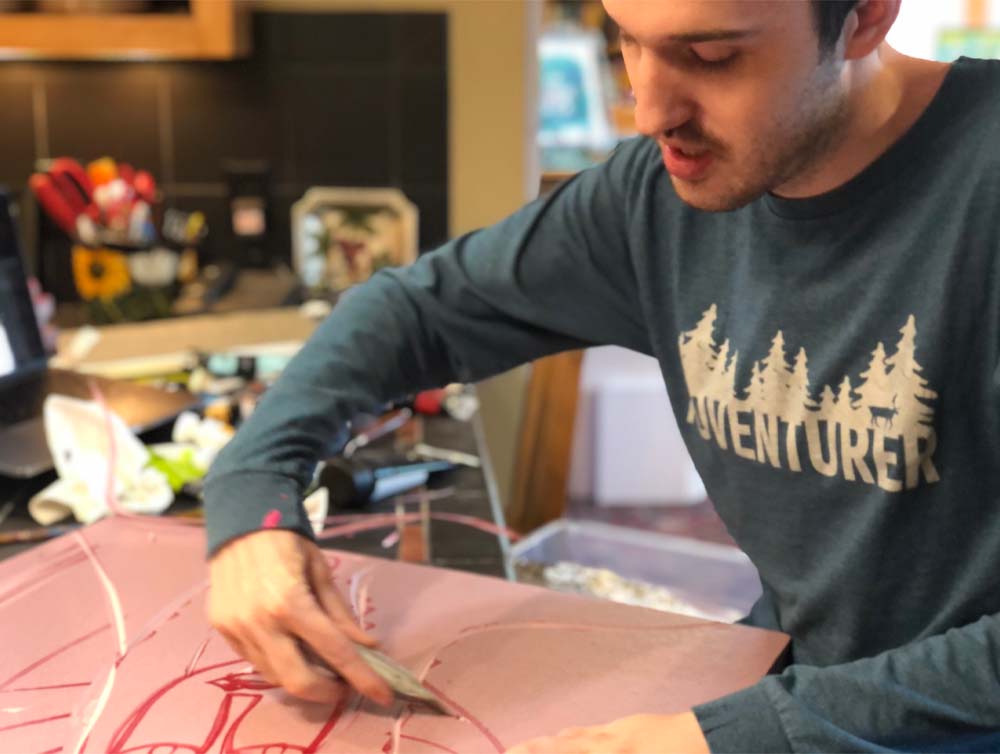 Jimmy’s great grandmother was a fashion illustrator for the St. Paul (Minnesota) Pioneer Press newspaper in the 1920s. Jimmy’s great uncle, George Schneeman, was a renowned artist in New York. So…why not? Art was in his blood. The art curriculum spoke to Jimmy. He began drawing images from National Geographic, most of them portraits with a focus on the eyes. His drawings were striking and unique. He saw something different in the images than I did. The emotional impact of his work was simple, yet complex. He started drawing with pencil on printer paper, and then we bought sketch books and oil pastels. He began blending colors and created strokes that are now considered his trademark, naming them “tickmarks.” He was motivated by creating. His curriculum was changed so that he read and wrote about different kinds art and artists. Art was changing his life.

In 2010, we hosted an event at our home as a thank you to Jimmy’s University of Minnesota doctors. Jimmy was making progress with his health and becoming quite a prolific artist. I scanned some of Jimmy’s artwork to make note cards for those in attendance. We put Jimmy’s pastels on easels for the event and when guests arrived, they walked through the family room and viewed his work. One of his doctors approached me and said, “Clearly, you’re supporting an up-and-coming artist. The works are amazing. Who is it?” I replied that they were Jimmy’s works. The doctor looked horrified and said they couldn’t be. I assured her they were Jimmy’s pastels. She hung her head and said, “I will never think of another patient the same way. I had no idea he could be capable of this kind of work. I now know that I know nothing about him. I never imagined.” Later that evening, using notecards, Jimmy read his stories about his art and his favorite artists. The applause was loud and rigorous. He spontaneously took a bow and said “Thank you for supporting my art.” He was so proud. He stood up straighter and made purposeful eye contact.

“You’re different from the rest. You’re different from the rest.” This is a phrase that Jimmy has repeated for a number of years. Jimmy first said this when he was in 6th grade, his first realization that he wasn’t like his siblings. He was distressed and upset. It broke my heart to hear him say this. This phrase surfaced on and off over the years, mostly depending on how he felt physically. Around the age of 18, as an already establish artist, Jimmy repeated this line. I stopped him and said, “You are different from the rest, you are special! You are an artist and if you weren’t different, your art wouldn’t be special.” He looked at me with a new perspective as if to say...well, okay then! From that moment on, whenever he says those words, I believe he means them as a point of pride. And just recently, I asked Jimmy how he feels about his art. “Creative, special, happy, glad, smart, and important,” he said.

Jimmy’s life and artwork have changed others in ways we could never have imagined. I often refer to him as a teacher. He has taught physicians to see things they could not previously, and he has opened the eyes of countless professionals to see ability and NOT disability. His art has brought joy and hope to many people. Even though he struggles to verbally communicate, he persistently shares his perspective and viewpoint. While it’s often not what you’d expect, he sees things as only he can. That may be the gift of autism. “Fascinating, fantastic, colorful, emotional, insightful, tells a story” are words and phrases that Jimmy recently used to describe his own work. I’ve heard these words used when viewers see his art as well.

Jimmy’s artwork has also had a profound impact on him and our family. We feel that others are able to see Jimmy as we always have: a brilliant, curious, remarkable human. His work has been exhibited worldwide, with glowing reviews.

As an outsider artist, Jimmy creates what comes to him naturally. As he said himself, he has a duty to his art.

Panel on the Art of Jimmy Reagan Video