Maria Thompson Corley , a professional pianist, is mother to visual artist Malcolm Corley, and they live in Lancaster, Pennsylvania. She may be reached at maria_corley@hotmail.com. 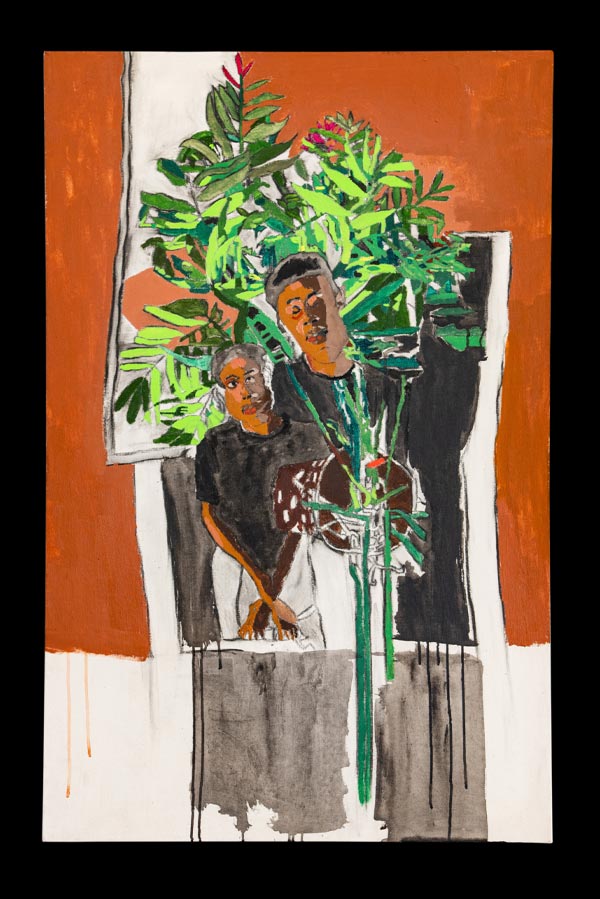 This untitled work by Malcolm Corley was used in a Kennedy Center publication.

Malcolm started drawing objects from the television show Blue’s Clues when he was 2. The next year, he was diagnosed with pervasive development disorder-not otherwise specified (PDD-NOS). I remember wondering how anyone could manage raising a child who was on the autism spectrum, but I never imagined that I’d find out first hand.

A few years later, Malcolm started drawing pictures he saw in Dr. Seuss books. (His favorite was Aunt Annie riding her alligator; I suspect he can probably still draw that one from memory). Soon thereafter, when Malcolm was 6 and my daughter, Kiana, was 8, their father and I separated. I definitely never imagined raising two kids in those circumstances.

I have a master’s degree in music and a doctorate in musical arts from The Juilliard School and had been a full-time professor before relocating to Lancaster, Pennsylvania, when Malcolm was four months old. After the move, my income was a patchwork of freelance and part-time jobs: church organist, piano teacher, concert performer, occasional voice actor, even more occasional writer, and lately, composer. I could see that Malcolm had talent, but I also knew that a lot of talented artists—including my Juilliard colleagues—can’t get by without a job outside their specialty. That said, I had no idea if Malcolm would ever be able to hold a job of any kind, artistic or otherwise.

As it turned out, Malcolm turned pro for reasons that had nothing to do with survival. At 15, he became fascinated with Julianatoren. I had no idea what that meant, so he showed me a video of a smiling little girl on an amusement park ride. I tried to explain that you can’t just meet up with people you see online, but he kept talking about Julianatoren, so one day I typed the word into my computer and discovered that he was obsessed with a Dutch amusement park, not a person. I didn’t have money for a trip to Europe, so I told him, half-joking, “When you become a great artist, you can take all of us.” 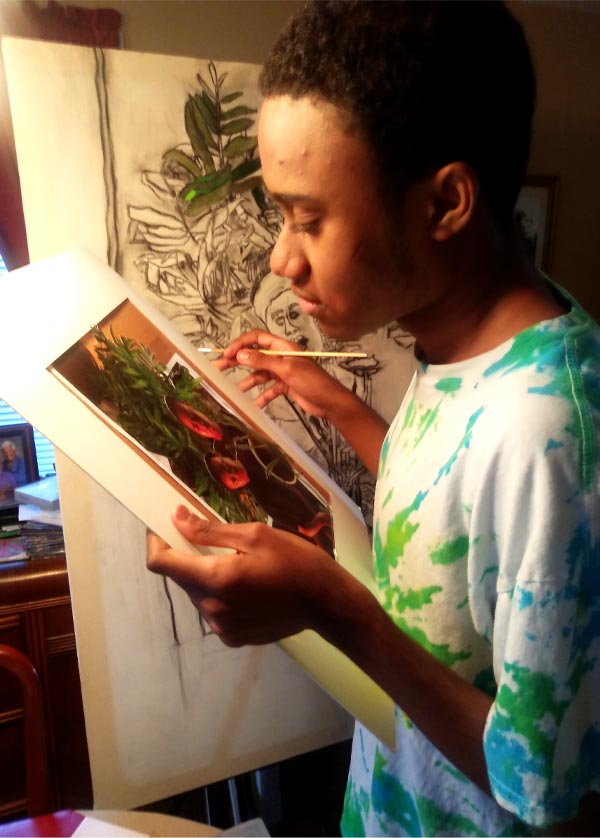 Soon thereafter, I found out that Malcolm’s autistic support teacher had been selling four-inch square ceramic tiles Malcolm had decorated with oil-based markers at semi-annual craft fairs as a way to raise funds for class activities. I figured, if he could earn money for his school, why not earn money for himself? My mom, visiting from Canada, usually bought small souvenirs for her friends. She got Malcolm to draw Celtic crosses as gifts. I posted a picture of one on Facebook, and a former colleague became his first non-familial client. Soon after that, my sister Patricia contacted the local newspaper, and Malcom's Tiles

(a website she designed and primarily administers) was born.

Two and a half years, lots of craft shows and a national autism convention later, Malcolm, his sister, and I made the trip to Europe, staying mostly with a relative in London. From there we made it to Apeldoorn, where Julianatoren is located. Malcolm’s main goal was to hug the mouse mascots, Jules and Julia, and he fulfilled his dream almost as soon as we arrived. He also got to dance along with the stage show he’d watched online countless times. The message? Earning money brings good things!

Malcolm’s development as an artist led him beyond four-inch tiles, although he still occasionally gets an order to decorate a tile. He’d won art awards in elementary and middle school, so it wasn’t a complete surprise that the head of the high school art department noticed his work. Brian Lehman watched Malcolm painting the portrait of his sister that would eventually win first place in the school art show, as well as recognition from Scholastic, and proposed that my son be included in the AP art program.

I never hesitate to let Malcolm try something, if it seems at all feasible. There were drum lessons, a stint in a choir, tap dancing, acting, voice lessons, violin, and a hint of piano. He’s not an expert in any of these things (despite having a gorgeous soprano, back when). Art, on the other hand, had emerged as a special gift. I figured that Malcolm deserved to at least attempt the AP class. I also figured it was going to be challenging. I was right.

Malcolm’s pace can be fairly rapid, but the larger the project and the more detail involved, the more glacial it becomes. His style can be very representative or rather abstract, but either way, he often becomes obsessed with details, to the point of near-paralysis. AP art meant cycling through assignments quickly, which meant late nights, frustration, and strong suggestions, on my part, when Malcolm had to choose what things to do for his sketchbook. I understood his perfectionism, to a point (nobody goes to Juilliard without swinging that double-edged sword), but I wondered what I’d gotten him into.

As it turned out, AP art changed his life. He created a number of paintings that either sold or led to commissions. Without Mr. Lehman’s gamble and guidance, Malcolm’s Untitled #1 wouldn’t exist. It was this piece that got Malcolm into the Kennedy Center’s 2019 VSA program, which resulted in workshops with the 14 other national recipients, exhibits, a cash award, and a profile in the local newspaper. The painting was also one of five works from the seven years the program had existed to be reproduced as a letter in the word, “Unity” (Malcolm’s painting was the “T”) for an installation at the Kennedy Center in January of 2021. It’s also scheduled to make the trip to Toronto in 2022 for the CRIP Ritual exhibition.

Malcolm’s family has been very involved in his artistic career. I uploaded high-resolution pictures of his creations, some of them taken by friends, others by a professional photographer, so that people can order prints. My sister found a print-on-demand site so that his images can be reproduced on mugs, bags, notebooks, and the like. He also gets occasional commissions. I consulted with my friend Cherie Sikking, a longtime professional artist, before setting the first set of prices, but in honesty, the pricing thing is still less than my favorite. This extends to my own compositions and concerts, however, over time I’ve become a lot more comfortable putting a higher dollar amount on my own work, which helps me to feel comfortable raising Malcolm’s rates. The validation from the Kennedy Center helped, along with the reaction of people like poet and activist DJ Savarese, who recruited three highly accomplished friends—Lateef McLeod, Claretta Holsey and Jorrell Watkins—to join him in writing poems inspired by Malcolm’s work. The resulting chapbook, Studies in Brotherly Love, will be published by PromptPress in September, 2021.

I find it frustrating that in order to get benefits, Malcolm has to maintain a barely- subsistence level of income. Pennsylvania ABLE

accounts have allowed him to save some funds. I understand why someone with disabilities who has a steady source of income would be ineligible for government assistance, and nothing would make me happier than for him to be in that category, but it is difficult for a visual artist to achieve that level of consistent financial success.

What happens next? I’d like to say I have a plan, but honestly, I don’t. I glance at CaFÉ™ – Call For Entry – but of late, my friends and acquaintances let me know if they’ve spotted something that might suit Malcolm. He says that art is “fun,” but also “hard” (I feel the same way about playing the piano!). His main ambition seems to be to earn enough money to travel to Disneyland again. He understands that being a “great artist” yields those kinds of rewards, however, with no real sense of the passage of time or drive to create “just because,” Malcolm may not be prolific. Actually, this makes each of his works that much more special. 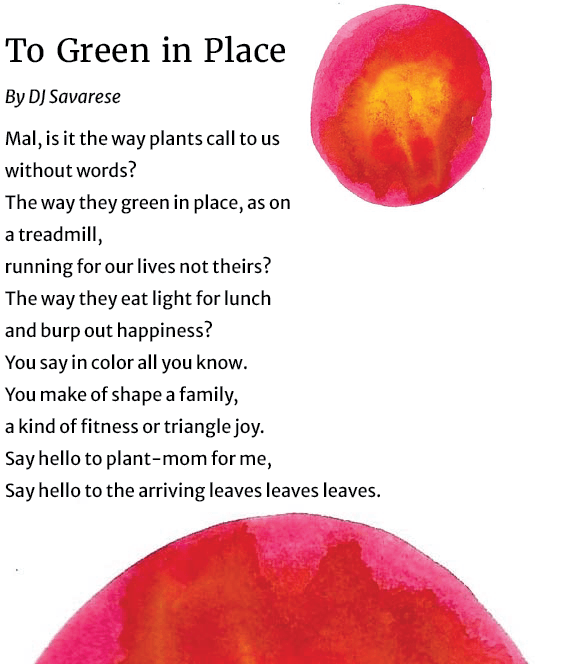 To Green in Place

Mal, is it the way plants call to us without words?

The way they green in place, as on a treadmill,

running for our lives not theirs?

The way they eat light for lunch

and burp out happiness?

You say in color all you know.

You make of shape a family,

a kind of fitness or triangle joy.

Say hello to plant-mom for me,

Blog: Information and Inspiration about Malcolm

| This blog shares more about Malcolm, his art, and his family.

first encountered Malcolm’s work on a Kennedy Center website and was inspired to write To Green in Place.