Eileen Bisordi met William Britt in 1974 while working at his group home, which later became Hawthorn Foundation, from which he now receives support services. She serves as head of quality improvement and program development for Hawthorn and may be reached at ebisordi@hfadm.org.

Bill Dowling is an employment counselor at Jawonio, a service provider in Rockland and Westchester Counties , New York, that has provided Mr. Britt with job services since 1995. He may be reached at william.dowling@jawonio.org.

William Britt is an award-winning, self-taught artist with developmental disabilities who has been painting for more than 50 years. Born in 1935, he spent most of his first four decades institutionalized at Willowbrook State School in Staten Island, New York. After Willowbrook’s closure due to overcrowding and deplorable living conditions, he lived in group homes and eventually his own apartment. Some of his paintings have sold for several thousand dollars. He once presented a painting of the White House to First Lady Nancy Reagan, and was commissioned to paint the Kennedy family compound in Hyannis Port, Massachusetts, on the occasion of Rose Kennedy’s 100th birthday. In 1986, he received the Joseph P. Kennedy, Jr. Foundation Award for Outstanding Artistic Achievement. At the award ceremony, Maya Angelou read her poem about his life. Today, at 86, he lives in Westchester County, New York, in an apartment in an Individualized Residential Alternative operated by the Hawthorne Foundation. He still paints every day and his art is represented by Pure Vision Arts 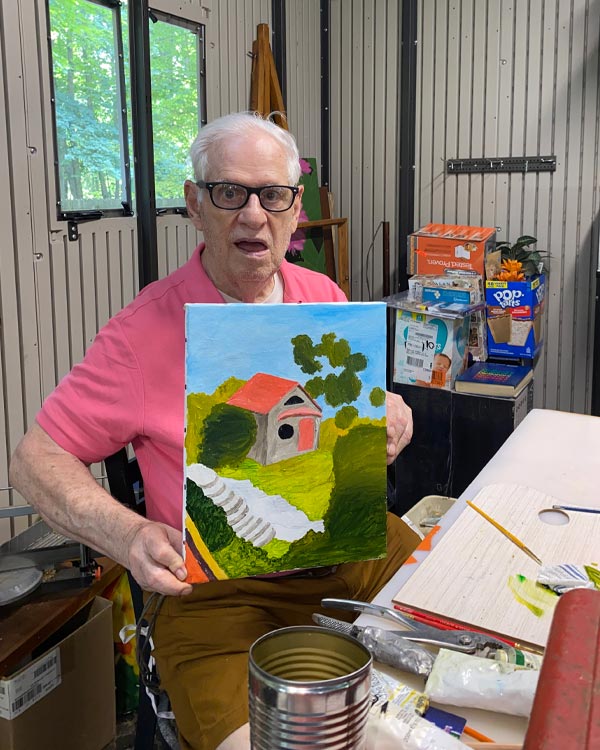 William Britt at work in his studio.

After a hot summer morning of painting and listening to classical music, William Britt sat down to talk about his art. He told us what he likes to paint – still lifes of flowers and vegetables from his own garden – and what’s important to him. As it is for many professional-level artists, money and recognition are important to Mr. Britt, and he is justifiably proud of his accomplishments. During our conversation, he stood up a couple of times to bring over a few of the many awards and plaques he keeps on his walls. Opportunities to excel have provided the ingredients that resulted in a happy, healthy life for him, and his identity as an accomplished artist clearly means a great deal to him. His life and his creativity, in turn, have meant a great deal to us.

Bill Dowling: How did art begin for you, Willie?

William Britt: God gave me a gift, and I taught myself to use it. I was in my 30s when I started, but I don’t remember the first thing I painted. It was so long ago.

Eileen Bisordi: You studied art at Westchester Community College, first auditing classes and then taking them for credit, graduating in 1985 with a 4.0 grade point average in the art courses you took. What did that credential do for you as an artist?

Britt: I learned a lot there from my instructors, [including] Tom. I got into pastels and watercolor, and did a lot of woodworking. I make my own frames for my paintings. I go out in the woods and get the wood for a frame and put logs on the planer to make it.

Dowling: You’ve inspired a lot of other artists and people around you over the years. Who inspired you?

Britt: [Names several instructors and others who made an impression over the years, spelling out some of their names]. They all helped me paint.

Dowling: How has art changed your life?

Britt: I was born to paint pictures.

Dowling: So, I guess you mean art didn’t change your life, it is your life?

Britt: Yes. You just have to go out and create, everyday. I see something in my head and then I start with a sketch. Then I make a list and go to the store to get everything I need to make it a painting.

Bisordi: I remember when you first came to us, when you didn’t have things to paint on you would go to the dumpsters and take the covers off of books, paint them white, and use them as a canvas. I’ve always thought about how you reused those things and how good that was for the environment. And growing your garden has been important for your work, too, because you paint so many flowers and garden vegetables. It seems as though nature is very important to you.

Britt: Yes, I like painting yellow tomatoes, kale, eggplant, oregano, zucchini, daisies, forsythia. I like painting springtime scenes, and [what I like best] is to paint nature.

Dowling: Your creativity and adaptability came out even when you worked as a custodian at the music conservatory. You’d be cleaning a room, but then you’d notice a doorknob that needed to be fixed and you’d just get it done. And your work ethic was wonderful, never missing a day. Why was that important?

Britt: To make money. It’s why I always worked hard. 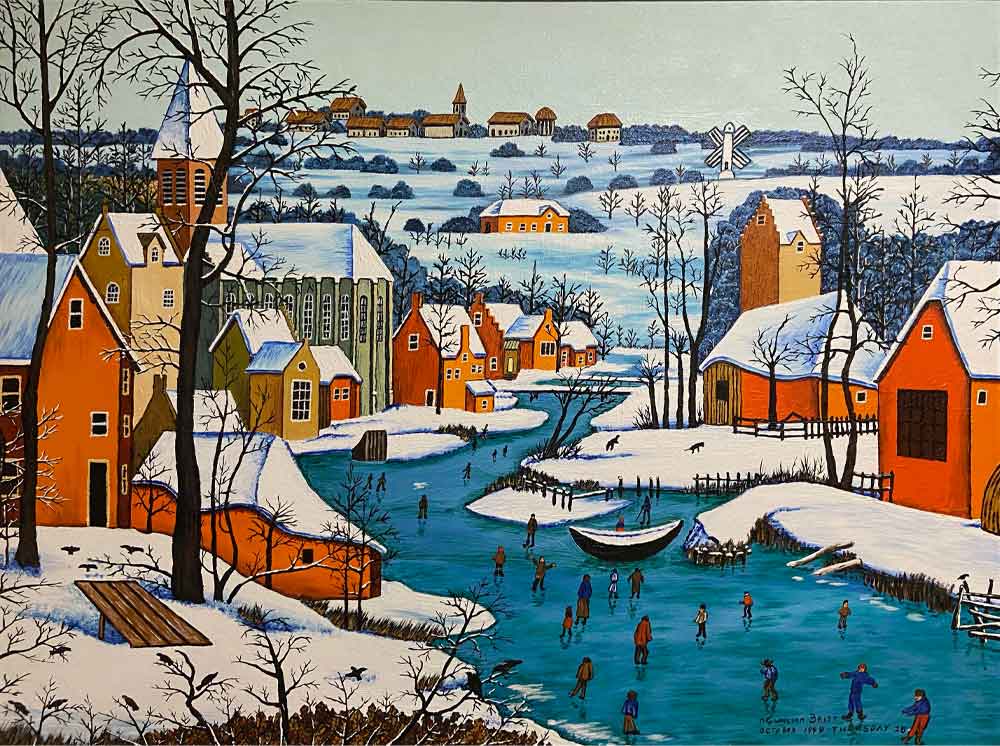 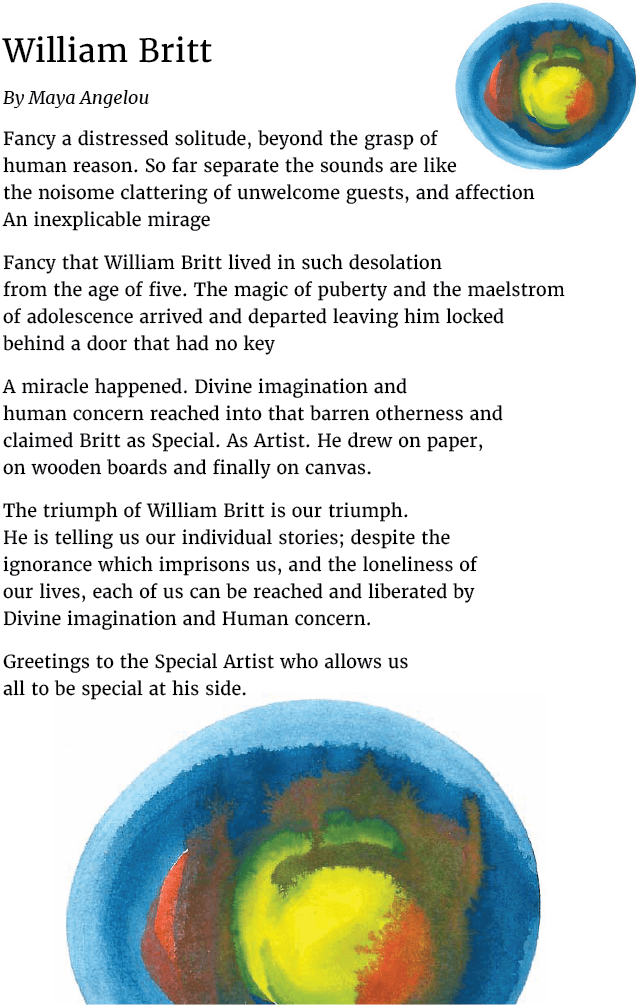 Fancy a distressed solitude, beyond the grasp of

human reason. So far separate the sounds are like

the noisome clattering of unwelcome guests, and affection

Fancy that William Britt lived in such desolation

from the age of five. The magic of puberty and the maelstrom

of adolescence arrived and departed leaving him locked

behind a door that had no key

A miracle happened. Divine imagination and

human concern reached into that barren otherness and

claimed Britt as Special. As Artist. He drew on paper,

on wooden boards and finally on canvas.

The triumph of William Britt is our triumph.

He is telling us our individual stories; despite the

ignorance which imprisons us, and the loneliness of

our lives, each of us can be reached and liberated by

Greetings to the Special Artist who allows us

all to be special at his side.

| Visual artist William Britt discusses his work and his process in this video.