Heller An Shapiro is executive director of ArtStream in Chevy Chase, Maryland. She may be reached at h.shapiro@art-stream.org.

Betty Siegel is director of VSA and accessibility at the John F. Kennedy Center for the performing arts in Washington, D.C. She may be reached at bsiegel@kennedy-center.org.

John Peter Illarramendi is a professional actor and a Kennedy Center usher who lives with Down syndrome. He lives in Bethesda, Maryland. 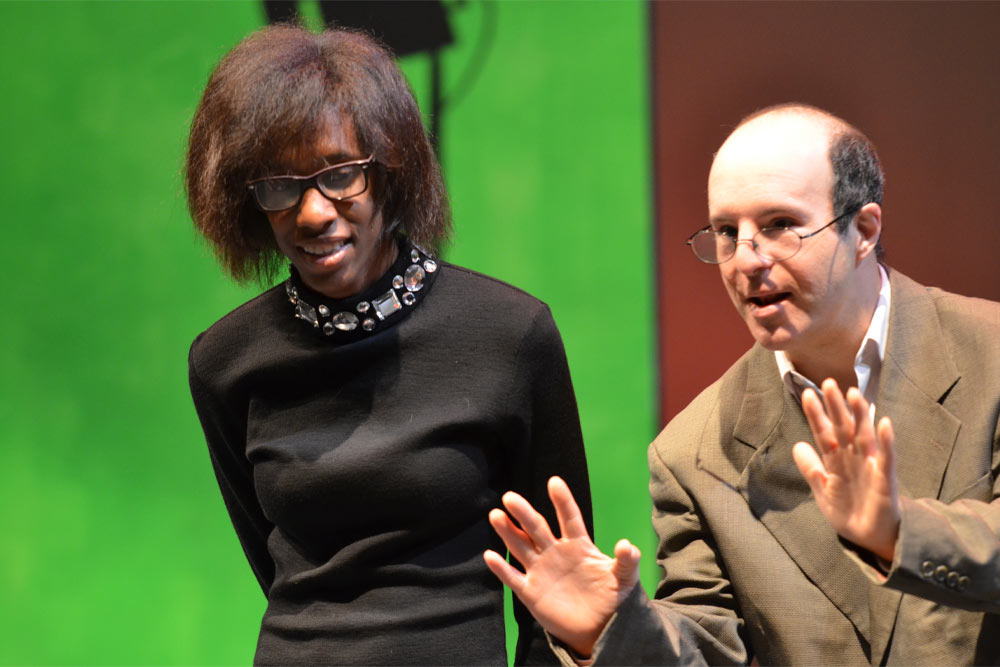 Rachel Williams, left, performs with JP Illaramendi in a production of Lasagnawood. Photo by Liz Demaree.

John Peter (JP) Illarramendi, who lives with Down syndrome, is a 47-year-old professional actor whose talents include acting, dancing, and music that he deploys in performance with ArtStream, the InterPlay Orchestra, and Open Circle Theatre. When he is not on stage, JP is on staff as an usher at the John F. Kennedy Center for the Performing Arts in Washington, D.C.

JP always had a passion and talent for performing. Post high school, however, the only employment available was as a grocery store bagger. Then a good friend recommended that he apply to the Kennedy Center’s Experiential Education Initiative (EEI) Internship. Launched in 2000, the EEI program offers hands-on opportunities to explore arts-based careers in today's complex performing arts environment for individuals with intellectual disabilities.

The chance to combine work experience with his first love – theater – was a dream come true. JP interned as a stage management assistant on several new productions in rehearsal. He followed along in the script as the actors got off book and called out lines when they forgot them. He escorted artists to and from rehearsals, and supported artist hospitality. His supervisor said “… JP is one of the best ‘actor wranglers’ and rehearsal assistants I’ve ever worked with.”

With stellar recommendations from his co-workers, he was hired as an usher after completing his internship in 2001. Additionally, he was cast in “New Visions, New Voices,” and in the 2010 VSA International Festival Opening Ceremonies. Choosing to work only part-time as an usher in order to pursue his career as an actor, JP has been cast in numerous performances around the Washington, D.C. area.

Today, JP still works at the Kennedy Center, with his artistic outlet and home at ArtStream in Bethesda, Maryland, where he has performed in 14 original musicals. Number 15 will be in Una-fjord-able, a comedic home renovation show. JP has more talent than one company can absorb, so he is also a tap dancer and percussionist with The InterPLAY orchestra, and he performs with Open Circle Theatre, where most recently he was in Jesus Christ Superstar and The Who’s Tommy.

Following is an edited transcript of a recent conversation Heller An had with JP:

Heller An Shapiro: How do you describe yourself and your career today?

What was a key turning point in your career?

There was one time when I was accepted into an art institute in New York. That would have been hard because I would be away from the Kennedy Center, so I decided not to attend. I made a wise choice. My family agreed that it would be best to stick with being an intern at the Kennedy Center, and focus on where I was with the acting. I made a right choice, supported by my family and others.

What about your acting work? What’s it like being an actor?

I like acting different roles and characters, being someone other than myself. I work with different directors, learning lines, singing lyrics in unison and in character, and choreographing the movements while portraying the character.

I like being cast in ensemble pieces. When we did The Who’s Tommy with Open Circle Theatre I acted in different roles. Multiple actors portrayed one character at different ages. In short, I like portraying every character role.

It all comes together on a live stage. Then the audience will smile and really get into the details of the story. We all pretend and we are part of it.

That is what acting is all about.

How would you describe your acting technique?

You just relax and it will come to you. That is how I was taught to remember lines. It will come to you when it comes. As long as I am calm, I can remember things. Slow. To be calm, breathe in, breathe out, stay in your own moment, or you can grab a script and check your lines or record yourself and listen to it.

How has it been during the pandemic? How have you adapted?

Before Covid it was nonstop. Working, acting, and interacting.

This year is the first time we had to do performances on zoom – like a film, not on stage. Everything is virtual this year. To be honest with you, I wish one day I could do physical work in person. I don’t mind doing it in a different way now. I am adjusting with COVID, learning all new things. We have to pray for something good to happen, but if it doesn’t, hey, it’s okay. One day at a time, who knows?

With so many acting and work commitments, does it ever feel like too much?

Open Circle Theatre, ArtStream, InterPLAY, and being a part of the Kennedy Center are all things I love. I love using my ability in many capacities.

I love tap dancing – I dance to anything. I listen to the music and I just dance. I started dancing on my own because I love music. That’s a part of me. As a dancer, I am being myself. I am a natural born dancer.

I am blessed that I do so many things that make me feel that I am happy. I’m just glad to be accepted in many roles in my life.

Thank you for sharing all this. What has this interview been like for you?

I just love having a conversation with you.

To do an acting gig with a person, or when you are doing a show, you have to be attentive. For me, even though this is an interview, not an acting thing, I listen to every question. When I listen, I ponder what the questions are, and I’m very calm. Acting is the same way, or playing your musical piece, once you listen to the other person, to the beat, then you can find a way to come up with correct answers.

It’s like you’re the director of this interview and I am the listener and answer the questions.

What’s the one thing you’d like people to understand about performers with disabilities?

In acting, you have to be respectful of one another. Especially another artist. Come on down, don’t be afraid, keep smiling, stay in character. It’s not a role that is only mine. I love anything that I get to be a part of with others, where people accept me, and I am respected.

When I am acting – I am accepted like everybody else, even though I was born with a disability, I think of myself as both at the same time. That’s the most important thing in life, in all parts of life - as a musician, as an artist – that we are each an individual person. I may be different, but I would rather be a person just like everyone else. Just like you.

I accept myself as a person. I do have a disability, but I’m a human being like everyone else.

| A State Department panel discussion on participation in the arts by people with disabilities.