Back to the Community: My Life in Rap, Poetry, and Activism

Leroy Moore is co-founder of Krip-Hop Nation. He may be reached at blackkrip@gmail.com.

Fresh off the high of two Sports Emmy awards for Rising Phoenix, the 2020 documentary about the Paralympics with a theme song by Krip-Hop Nation artists, Krip-Hop founder Leroy Moore is dreaming bigger. He wants to build a cultural center, where students and the public can learn about Black disabled art and activism. Krip-Hop Institute will bring artists together to perform and will create a space to explore the political history of Black/Brown artists with disabilities. This fall at UCLA, Moore, who lives with cerebral palsy, will begin a doctorate program in anthropology, which he describes as the next logical step in creating the Institute. It has been a long journey for Moore, one that began to the sounds of soul, jazz, and blues from his parents’ vinyl collection, included a trip to the Paralympics himself, and saw him captivated by the early rappers of the late 1970s and 1980s. 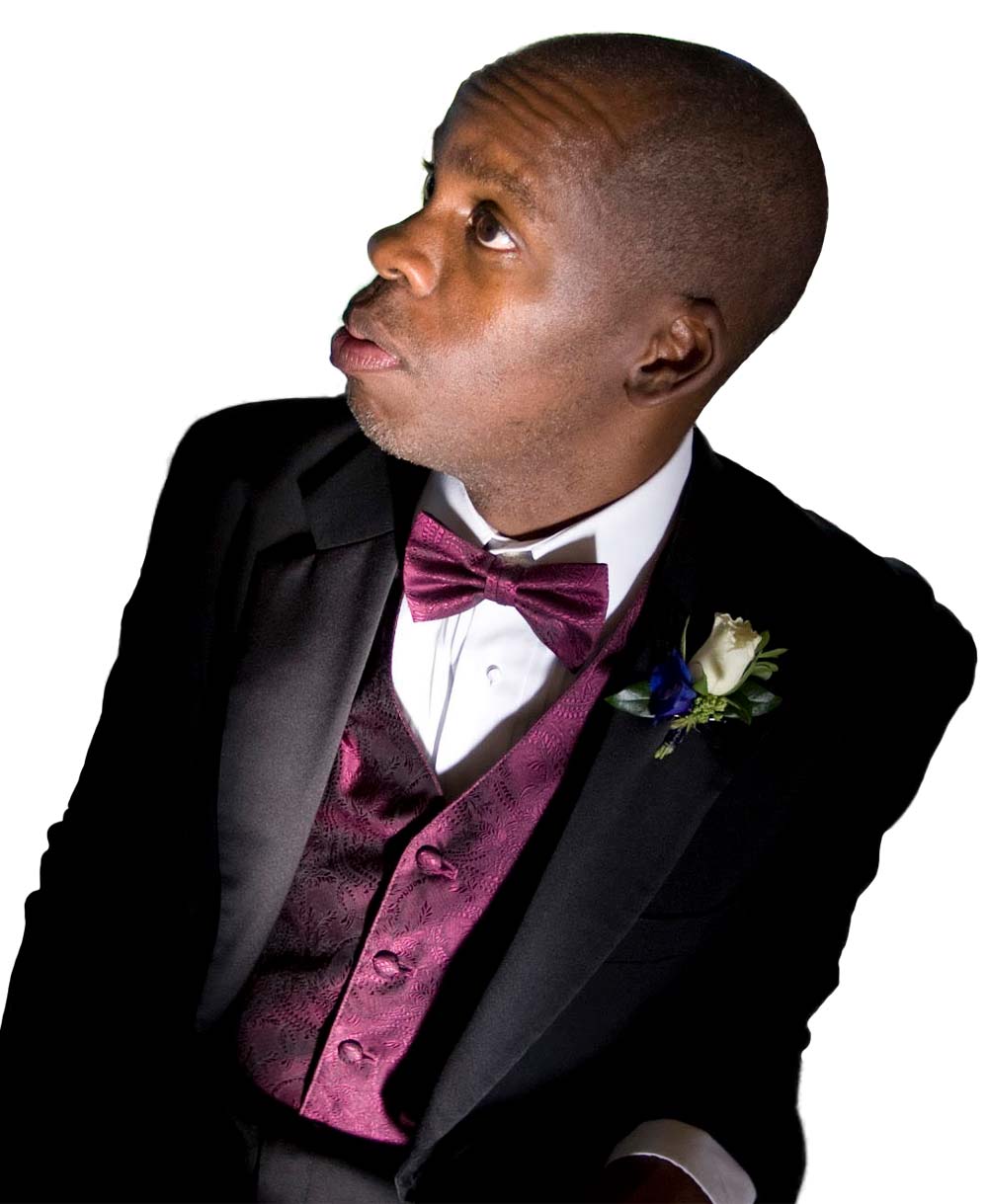 Researchers at UCLA were doing a book on hip-hop and they wanted Krip-Hop to be involved. Krip-Hop is an art form that uses alternate arrangements by which hip-hop artists with disabilities can share their experiences and increase awareness in music and media outlets of the talents, history and rights of people with disabilities. When they heard all that I’ve been doing for the last 13-plus years, one of them asked if I’d ever thought about getting a Ph.D. I was like, “No, no, never thought about it, I’m just doing the work.” Then they said the key words: It can be free. I laughed and told them that changes everything. So, I took the GRE and now I’m heading to LA. It’s off the wall.

This all started about 14 years ago on a radio station here in Berkeley, KPFA 94.1 FM. I was involved with a radio collective on disability called Pushing Limits. I convinced them to do a three-part series on hip-hop and disability. So, after they did that three-part series, I came home and my Myspace – there was no Facebook yet – was just blowing up, like all, “Krip-Hop,” and “Let's do this.” I mean, from all over, from Germany, Italy, and South Africa.

At that point, I put a few things down on paper. A friend of mine, Rob Da Noize Temple, and I were talking through Myspace and then I was in his studio in Brooklyn, New York, and we were talking about starting something and he was like, “Yeah, let’s do it.” He was an elder of mine and was DJ for the Sugar Hill Gang and had a disability. He passed away last year but he was the co-founder of Krip-Hop and there from the beginning. Then I met Keith Jones, another Black disabled activist who was also a hip-hop artist. We met face to face at the Democratic National Convention in 2004 in Boston.

At first, a lot of people were totally against our name. It sounded like the Crips and the Bloods, the gangs. A lot of people don’t realize that the Crips, the gang in LA, had a disabled member, and so they called themselves Crips. That term came from people with a disability. At the time, hip-hop also had a lot of negative associations, and so flipping it to Krip-Hop was intended to highlight the positive.

And right away, we got hate emails and a lot of push-back from the hip-hop industry. They thought we were taking down hip-hop by including disability. Our first public event was at UC Berkeley in 2009. We were calling it Krip-Hop and Homo Hop, trying to diversify hip-hop. We wanted to bring together hip-hop artists who had disabilities or who were queer because both sectors were dealing with raw discrimination from the industry. People were tearing down our posters. It was hard core. I was texting one of the old-time hip-hop artists about this event at UC-Berkeley and for a while he said he’d be there, but when I told him more about it, he said he couldn’t come. I wasn’t surprised. I’ve always known that hip-hop is ableist and homophobic, so I wasn’t surprised. But a light went on in my head. I knew that what we were doing needed to happen.

We’re talking about this more today, but the mainstream music industry still has no clue about disability. Krip-Hop has never been on a mainstream hip-hop channel and I hear discrimination stories all over the place. You don’t see disabled hip-hop artists on MTV. Discrimination is still there. We’re talking about it more because of new diversity and inclusion efforts, but for me at 53 years old, the time to talk is over.

My father had a big record collection back in the ’70s, when we were living in Connecticut. Looking at his collection, I saw a lot of black disabled blues singers on the shelves. And then I saw Porgy and Bess, the opera, and said to my mom, “Hey, I’m on TV!” It was the first time I’d seen a black, disabled man on TV, and it shocked my world.

Being disabled in the ’70s and ’80s, I spent a lot of time alone. And I wrote poetry. My father took me to New York to see The Last Poets, and that just blew my head out the water. Because of course at school all you’re taught is white man’s poetry. When I saw The Last Poets do their stuff on stage, I knew this was it for me.

I moved to the Bay Area and was performing onstage when Lisa “Tiny” Gray-Garcia and her mother, Dee Gray, from POOR magazine came up to me and asked if I’d want to write a column, so I started Illin n’ Chillin. I think it was the first column on race and disability. It was in the mid ’90s, when nobody was talking about poverty and disability, so they were switching it up. That guided me to do my own stuff, and eventually I put together a non-profit called Disability Advocates of Minority Organizations. We also started New Voice: Disabled Artists & Poets of Color, performing our poetry and our music around the Bay Area.

When I think back to all those artists, I think of them as my elders, my ancestors. I’m adding my touch to an already deep history, and it gets me frustrated that the music industry doesn’t see it. Even hip-hop studies don’t talk about disabled blues singers when they look at the roots of hip-hop. If you are going to talk about the blues you have to talk about disability because so many of those singers were disabled.

So that’s what I’m bringing to UCLA. And what comes out of it will be a Krip-Hop Institute. We want to take over a building with a library, a visual art gallery, performance space, international floors, and computers where different chapters can talk to each other from across the world. It will be an educational space. A lot of these cultural museums have nothing on disability. The Institute will be a place where other cultural centers can come and bring disability back to their own museum.

All of this is just in my mind right now, but I told my adviser at UCLA about it and he’s like, “Oh, yeah. Bring it. Bring it on.” The timing could be great because the 2028 Paralympics will be in Los Angeles.

Hip-hop wasn’t always anti-disabilities. I was there when hip-hop was on the streets of New York and all kinds of people were doing it. Blind artists, all kinds. But then it got really big and corporate, and they created this image and a hip-hop artist in a wheelchair didn’t fit that image.

I wrote a poem a couple of months ago about an old blues artist talking back and forth with a Krip-Hop artist today. The old blues singer is like, “Stop spitting on me,” and the rapper says, “No, it’s called beatboxing.” And then the rapper asks why he is moaning and the answer is “No, that’s the blues.” It’s all this back and forth of why do you do this or that, and at the end they talk about getting together and making a hip-hop blues song.

In the end, it all comes back to poetry. Most people could count one or two poets they’ve heard of, but if you get a following, put it to music and you’re all over the Internet, you have a voice. That’s a powerful thing. You can change culture in a way that people who are just academics can’t. 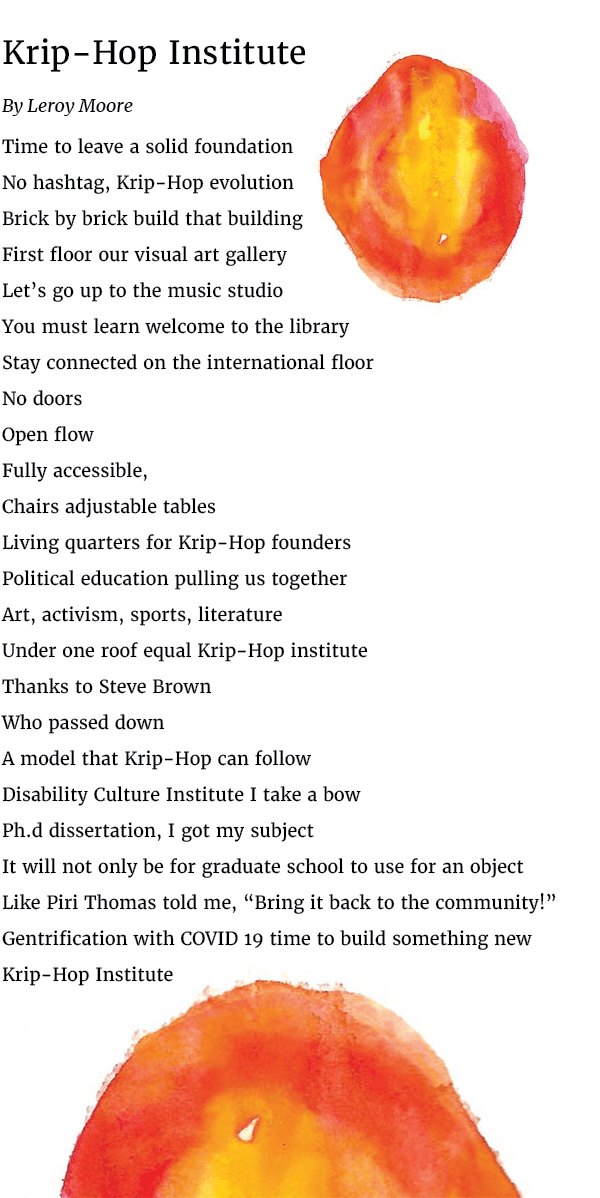 Time to leave a solid foundation

Brick by brick build that building

Let’s go up to the music studio

You must learn welcome to the library

Stay connected on the international floor

Political education pulling us together

Under one roof equal Krip-Hop institute

Thanks to Steve Brown

Ph.d dissertation, I got my subject

Like Piri Thomas told me, “Bring it back to the community!”

Gentrification with COVID 19 time to build something new