Interact Center for the Visual and Performing Arts

Jeanne Calvit is the founder and artistic/executive director of Interact Center for the Visual and Performing Arts in Saint Paul, Minnesota. She may be reached at jeanne@interactcenter.com. 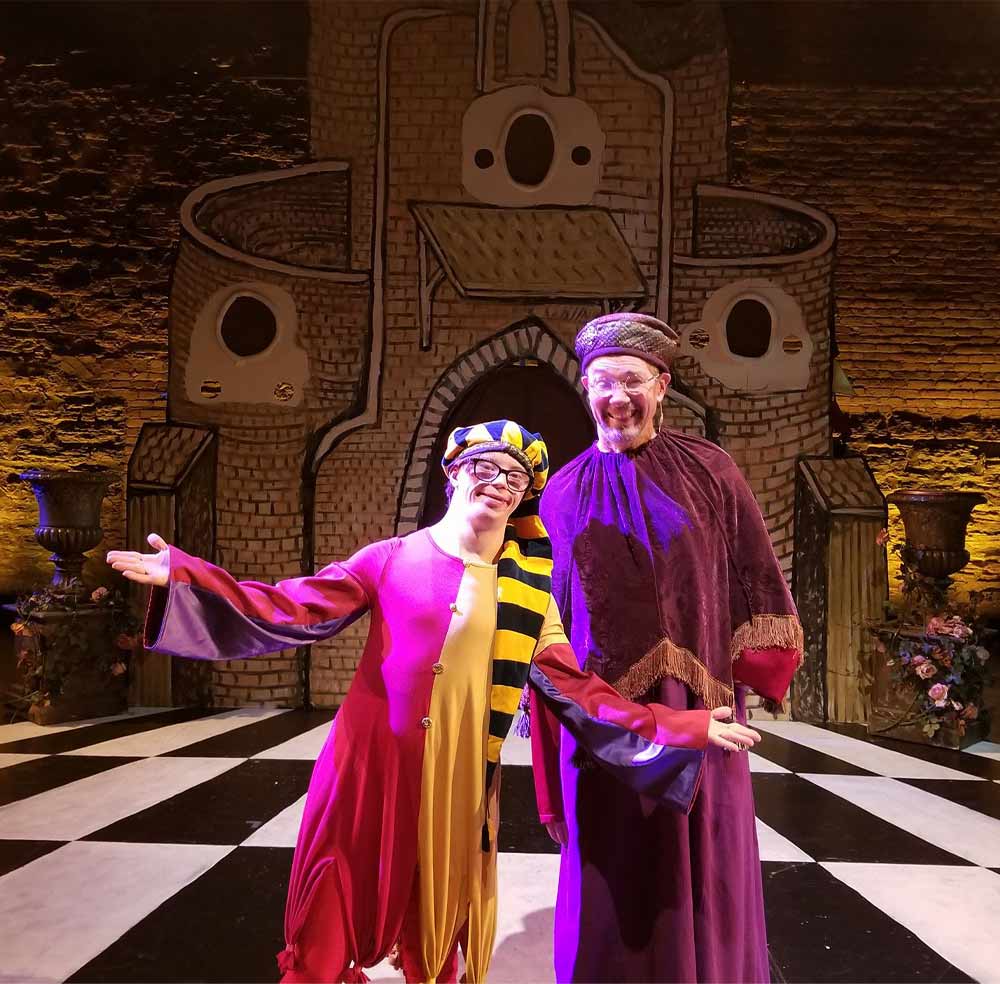 Joe Blegen and Kevin Kling perform in Feast of Fools.

Interact was the first – and remains the only – U.S. multi-arts visual and performing arts organization that creates professional theater productions and visual arts exhibitions by artists with disabilities. We started Interact in the spirit of radical inclusion – the concept that everyone has a voice and everyone brings a unique talent to the mix. There is a creative spark in everyone.

We began with five artists in 1996 and today work with more than 120, ranging in age from 18 to 70-plus. They come from diverse ethnic and cultural backgrounds (African, American Indian, Asian, Latinx, Pacific Islander, and European) and represent the spectrum of disabilities, fulfilling a dream to foster an exchange of experiences and collaborate in creativity that can transform lives.

Interact won two Ivey Awards (Minnesota’s Tony Awards) and has garnered support from the National Endowment for the Arts, New York’s prestigious Multi-Arts Production Fund, and others. Interact’s work is shown in high-status galleries throughout the region and presented in theaters such as the world-renowned Guthrie.

Before all of these accomplishments, Interact was just a dream that took root while I studied with the famed Jacques Lecoq International School of Theatre.

I grew up in Baton Rouge, not far from New Orleans, and left home for Europe, where I lived for a decade when I was in my 20s. After touring with an international theater company, I went to the school, which had a unique approach to acting that has been the basis of my life’s work. In the Lecoq method, actors develop theater through improvisation, drawing from their own creativity rather than working from a playwright’s script. Lecoq gives performers the chance to be creators and not just interpreters of someone else’s vision. This fosters an environment of radical inclusion, the concept that everyone has a distinctive voice, and every voice should be nurtured as part of the creative mix.

When I moved back to the United States, I began creating theater workshops in nontraditional settings, including a summer camp for people with disabilities. I began to envision a place where everyone could work together regardless of their disability.

I started Interact Theater for performers with disabilities in 1992. That grew into Interact Center, a multi-arts visual and performing arts center for adults with disabilities, which I formally established in 1996, with the help of several advisers. 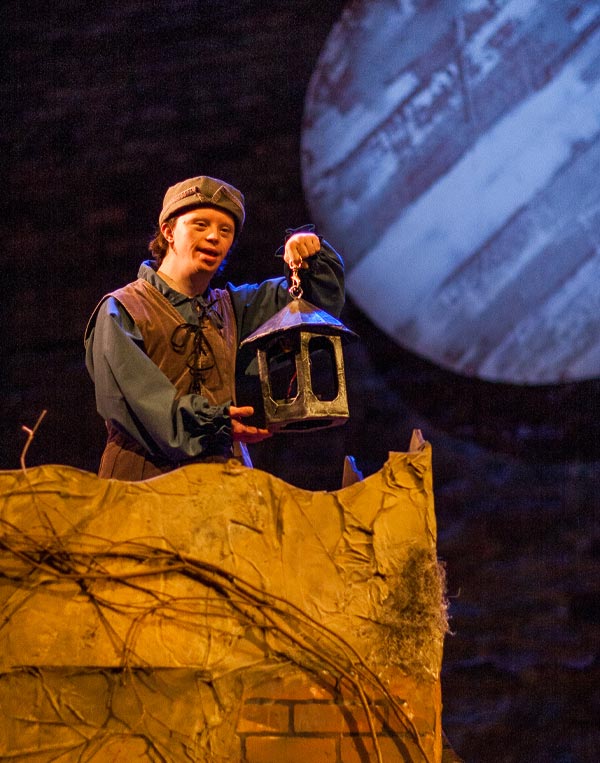 When Interact Center began, we planned for up to 50 people. Within a year and a half, we outgrew our space. By early 2020, with 120 people in the company and more on the waiting list, we were close to bursting our seams again.

Some folks opted out when the pandemic forced us to temporarily shutter our physical space, but we have continued to welcome new artists in virtual space. We’re presenting 50 virtual workshops each week to keep the creativity going, and sales of artwork are reaching national and international collectors for the first time through our new online gallery. In June, we premiered our first virtual theater production, Zoomtopia, which ran for a month.

Throughout the theater work I was doing in the 1980s, I kept noticing all the untapped talent of people with developmental disabilities. There were no outlets for them to discover their talent and put it into practice on a daily basis. Instead, most people with disabilities often end up doing menial work. A good example of this is one of our artists who used to clean bathrooms at the mall before she joined Interact. Her father is a noted African drummer and performs around the world and she had been dancing since she was 2 years old. Her greatest passion was to become a dancer, but instead she was part of a crew that went to work early in the morning, cleaning toilets in a shopping mall. She was not happy in this job. This broke her mother’s heart, because she wanted her daughter to realize her full potential as an artistic person. When she learned about Interact, she brought her daughter in for a visit, and she was a natural. She’s been featured in all of our shows, and even performed with us at the internationally acclaimed Guthrie Theater multiple times to standing ovations.

People with disabilities are not typically recognized in conversations around high quality artistic work, and they are typically seen for what they cannot do, rather than for their talents and abilities. Interact’s mission to “create art that challenges perceptions of disability” aims to recalibrate those misperceptions.

Rather than being siloed into “for a good cause” kinds of arts events, Interact artists with disabilities appear professionally on stage and in gallery exhibitions alongside nationally recognized artists with whom we collaborate, such as actor/playwright/NPR guest commentator Kevin Kling, or the widely collected urban photographer, Wing Young Huie.

People ask what we mean when we say we are the only professional visual and performing arts center in the country. One of my advisers was Elias Katz, who helped spearhead several professional visual arts centers for people with disabilities in the Bay Area. He advised me to hire only professional practicing artists as staff. They can be trained in the disability aspects of the job, but they will approach the teaching and mentoring with the goal of creating high-level art and theater that is competitive in the arts community. To this day, all of our staff, including administrators, have an arts background and we call our participants artists, not clients. We have heard from many artists through the years that Interact gave them a new identity. Before joining us, they felt like they were “flawed or less than,” and now they identify as artists who contribute to and are part of a vibrant arts community.

We know that the artistic process has the power to change things, to give us those “ah-ha” moments that can blow your thinking wide open.

We have a performer at Interact, Joe Blegen, who has been with us for about five years. He has Down syndrome, and he is absolutely a comic genius. He uses sign language, because his speech is hard to understand, so his performances typically center around physical comedy and not spoken dialogue. Taking advantage of the spectrum of creative workshops we offer virtually, he opted to take a poetry workshop. We immediately recognized his huge talent for writing and a capacity for expressing big thoughts he had never been able to share before. He wrote a poem for Zoomtopia that expresses his deep sadness during the pandemic, comparing his heart to an apple in a tree that he’s unable to reach now because he is all alone. Those kinds of revelations and new understandings change how we think about people with disabilities.

Eric Wheeler, another performer with Down syndrome, who has since passed away, was from a show business family. Before joining Interact, he vacuumed carpets at a restaurant for a living. His movements were slow on the job, but he really came to life on stage. We convinced his support team that being paid as an actor was a better fit.

He auditioned for Interact’s first production, playing a character who could not adapt to changes in society – your typical Archie Bunker. He played the role incredibly well. John Rynders, an expert on persons with Down syndrome, came to the performance and said that after 25 years of teaching and writing about people with Down syndrome, he was still not expecting to see this actor improvise, remember lines, and have perfect comic timing as the main character in a two-hour show!

Eric later helped develop a show that was part of two European tours for the company and had lead roles in productions in Minneapolis, Australia, and Thailand.

Sadly, he developed cancer at 42. We were in the middle of a play at the time and doctors recommended he drop out to rest. He ended up telling the doctors that he was not dead yet, and went on performing. Leaders in the arts community came to his final performances and celebrated him. He finished out the show and passed away a few days later. He is one of the most incredible examples of what people with developmental disabilities can achieve when given a chance.

More needs to be done to expand the vision of what constitutes a career in the arts. After 25 years, I still have not seen a lot of variety in the jobs offered to people with developmental disabilities. We must take time to better understand the contributions people with disabilities can make and their untapped potential.

Media Kit: Interact Center for the Visual and Performing Arts

| This video introduces Interact, with clips from performances and interviews with performers.