Seth Keller is a neurologist with Neurology Associates of South Jersey in Lumberton, New Jersey, and co-president of the National Task Group on Intellectual Disabilities and Dementia Practices. He may be reached at sethkeller@aol.com.

Matthew Janicki is a psychologist, an associate research professor in the Department of Disability and Human Development at the University of Illinois at Chicago, and co-president of the National Task Group on Intellectual Disabilities and Dementia Practices. He may be reached at mjanicki@uic.edu. 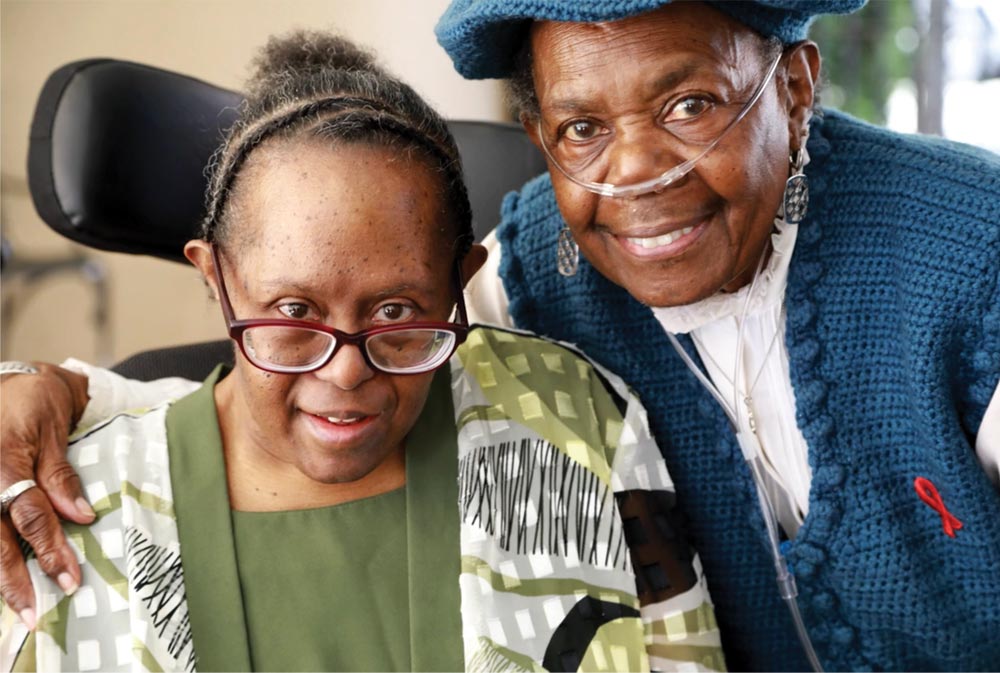 , a video by Faces Redefining the Art of Medical Education (FRAME).

Alzheimer’s disease and its effects are well known, and have caused extreme challenges for many people and their loved ones. The disease is becoming more prevalent across the world as people live longer. For some, age brings with it brain pathologies that ultimately lead to cognitive decline and the progressive loss of function resulting in death.

This is also true for people with intellectual disability and, in particular, individuals with Down syndrome, who are born with an extra copy of their 21st chromosome (trisomy 21).On this chromosome are the genes that lead to the excessive replication of beta amyloid protein. This protein has been found to be one of the contributors to the development of Alzheimer’s disease. Having an extra copy of the 21st chromosome means that the body makes more of this protein, and it begins to build up in brains, beginning in the 20s. By the time adults with Down syndrome are in their 40s and 50s, there is a tremendous amount of this material in their brains. The current thinking is that this protein contributes to irreversible brain degeneration, leading to early-onset dementia related to Alzheimer’s disease.

Many professionals, researchers, families, and advocates from the aging and disability fields have advocated for a better understanding of the genesis of this disease and how it affects people with Down syndrome. These concerns are also raised for adults with intellectual and other disabilities, who are less at risk of Alzheimer’s but are also susceptible to many of the same dementias that the general population experiences.

The National Task Group on Intellectual Disabilities and Dementia Practices (NTG) (the-ntg.org) was created in 2010 at the confluence of several timely factors.Many U.S. and international leaders in intellectual disability, Alzheimer’s/dementia, and Down syndrome had been concerned with the growing prevalence of dementia among older adults with intellectual disability.There needed to be a way to coalesce much of this concern and focus it.The National Alzheimer’s’ Project Act (NAPA), signed by President Obama in 2011, charged the federal government and its civil society partners to create the National Plan to Address Alzheimer’s Disease. Congress passed NAPA because it was becoming clear that Alzheimer’s disease (and other notable causes of dementia) was going to become a national economic and social crisis, in addition to being a personal crisis. Congress set a target date of 2025 to achieve the plan goals. Growing interest about Alzheimer’s disease within the intellectual disability and Down syndrome communities and a consensus that the nation needed a focal point in this topic, lead to the creation of the NTG.

It was a serendipitous combination of interests and the passage of the NAPA that provided the opportunity to link the concerns of key leaders in the intellectual disability community and begin the work within the NAPA framework. This permitted the alignment of our goals and ensured that the unique issues and concerns facing adults with intellectual disability and their caregivers and supports would be known, represented, and addressed in the plan.

Many families, community provider agencies, and the entirety of the healthcare system, including intellectual disability, Down syndrome, and dementia researchers, desperately needed to improve care and supports, otherwise the disease and its significant complications would continue. With a growing aging population of adults with intellectual disability, this outcome had already occurred for many, and it was known that many more adults were going to face this same fate. The families and community support organizations, including their direct support professionals, all were going to face an onslaught of care needs and they were unprepared. Raising public awareness, providing information, and enhancing workforce education and training – as well as advocacy for increased funding – all had to be addressed.

In 2011, at the start of the NTG, the leadership laid out several priorities: education and training, raising awareness, and development of a screening/assessment tool.These were all covered in its seminal national plan document, “My Thinker’s Not Working” (National Task Group, 2012).

Along with coalescing to create this document, the collective that became the NTG organized itself as an official working body relatively quickly due to the dedication, vision, and coordination of its initial members and their shared commitment to pursuing NTG activities. It began as a collective organization made up of volunteers supported first by the American Association on Intellectual and Developmental Disabilities (AAIDD). Subsequently, the American Academy of Developmental Medicine and Dentistry (AADMD) provided a home, along with support from the University of Illinois at Chicago and the Center on Aging at the University at Albany (New York).The NTG organized into a viable entity and filled a vacuum. Within several years, it accomplished several of its main goals and became recognized as one of the most important “go to” groups in the field.

Our challenge came in prioritizing our efforts and creating a well-respected voice in the field. The NTG published several articles in peer-reviewed journals on intellectual disability and dementia care and supports. It also created an education and training program (composed of content modules and workshops) that is still offered to numerous care support agencies across the country, with an extension now occurring in Canada.Numerous series of webinars have complemented these trainings.These included information about how to recognize when decline begins, and provide appropriate care and supports as the effects of dementia progressed. Serving as a sounding board and focal point to family members and caregivers who were seeing, feeling, and living what dementia brought into their lives energized our team. We appreciated that we had to do something, and we took doing it as a personal responsibility.

In response to a call for a simple instrument to record behavior and function, the NTG created an early detection and screening tool. Designed to be used by agency personnel and families, it provides information to validate suspicions and help clinicians determine if functional decline has occurred. Losing function as one grows older has many causes, and recognizing this and getting an appropriate assessment is paramount. The Early Detection Screen for Dementia (NTG-EDSD), noted by the National Institute of Aging, is now being used across the world and is available in many languages for screening adults with intellectual disability.

Our family support efforts, reflecting our commitment to acknowledging the key person in the life of an adult living with dementia, include making available written materials useful to families, and running a virtual national support group for caregivers. Our board members who have family members with disabilities are involved in public policy efforts and offer counsel to governmental bodies.

We coalesced with other disability organizations to inform families of concerns related to the COVID-19 pandemic and continue to be part of this collaborative effort to make families and people with intellectual disability (who also may be living with dementia) aware of safety factors, their rights, and how to best protect themselves during this significant public health crisis.

Our model of building a voluntary coalition into a non-profit organization has been quite effective (Janicki & Keller, 2014).We are now a non-profit 501c3 organization, with a board of directors made up of leaders in the intellectual disability and dementia fields in North America. One of our board members serves on the NAPA Federal Advisory Council on Alzheimer’s Research, Care, and Supports, and another is a member of the President’s Committee on Disability. We have another who is the head of the interest group on intellectual disability within the American Academy of Neurology, and others who are key members of related professional organizations. We can directly offer counsel alongside other governmental and nongovernmental leaders to ensure that concerns related to intellectual disability, generally, and Down syndrome, specifically, are heard.We also have membership on other advocacy bodies, which amplifies our collective voice and influence in federal and state supports and research funding related to caregiving and finding a diagnostic biomarker for Alzheimer’s. We support efforts to find a cure or possible mitigating medical therapeutics to help offset the severity and course of Alzheimer’s disease and other causes of dementia.

Most recently, we have taken a leadership role with respect to the recently FDA-approved class of therapeutic medications designed to treat Alzheimer’s disease. Our Medical Advisory Group issued a statement and is further addressing whether the new Alzheimer’s disease drug Aduhelm (aducanumab) shows promise for people with intellectual disability. This medication, given monthly, showed that it could reduce the level of, and potentially eliminate, beta amyloid in the brains of people with Alzheimer’s. The clinical trials had not shown for certain that it would improve cognition, however. Also, the trials did not involve people with Down syndrome or other intellectual disability. The NTG’s statement proved helpful, therefore, in getting the manufacturer of this drug to restrict its use. The statement also raised awareness that participants in further clinical trials for this drug, and others like it, must include people with intellectual disability.

The NTG is committed to advocating for persons with intellectual disability who are affected by dementia, as well as their caregivers and providers. This aspect of growing older is not a part of normal aging and deserves a voice to mitigate its presence and add to a higher quality of life in older age.

Formation of this organization has demonstrated that a highly motivated and dedicated group of advocates, working together, can change how the world views disability and aging.

Early Onset Alzheimer’s Disease in Adults with Down Syndrome

from Project FRAME (Faces Redefining the Art of Medical Education) shares stories of families adjusting to the effects of dementia.