What Margaret Taught Me

Katherine Hamann serves as guardian to Margaret and is director of the Family Transition Project for The Arc of Illinois in Mokena, Illinois. 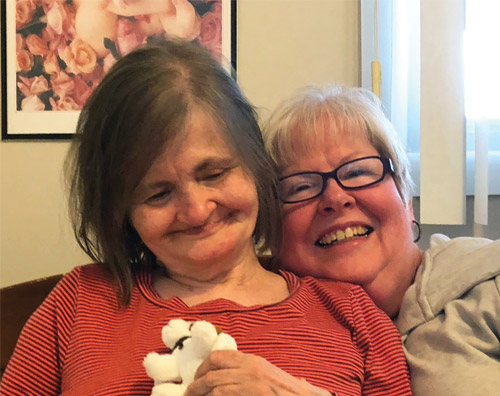 The author (right) and her sister on a recent visit.

My sister Margaret’s story is a simple one. She was institutionalized at two years old. Yet, like snowflakes under a microscope, a closer study reveals complexity, uniqueness, and many unanswered questions. With age and loss of many involved, I realize I will never have these answers, never understand what she has survived, and never know how she frames her own experience.

Here is what I know: In 1945, Margaret Castle Doering was two years old. Our parents, Carolyn and Henry Doering were separated by World War II – he served in the Coast Guard. At 2, Margaret didn’t speak. Carolyn wondered if their daughter was deaf. The family doctor recommended a specialist, who told her that Margaret would never be able to live a normal life and should be institutionalized.According to these specialists, Margaret shouldn’t be able to walk or toilet herself, although she had achieved both milestones already, and they said she would probably not survive puberty. Family conferences ensued. Everyone but one grandfather favored lifting the burden from this young couple and letting them start over. Carolyn’s parents’ neighbor, a psychiatrist, was the director of mental health for Illinois. He helped them jump the line of families waiting to admit children into state institutions. Margaret was made a ward of the state and sent to Dixon State School. Eight years later, our oldest brother was born, then me, then our younger brother. No one saw Margaret after occasional grandparent visits in the first few years. Her existence was a secret from her siblings. Our older brother saw correspondence from Dixon and asked who Margaret was.They eventually told all of us. We never met her until we were adults and insisted on accompanying our parents, who had started to attend annual care meetings. I became her guardian when I learned at one of these meetings that Dixon wanted to support family members in this endeavor.

What was this traumatic break like for Margaret herself? A report written when she was admitted to Dixon says, “Margaret pays no attention to her surroundings, just sucks her thumb. She is untidy, does not talk and has to be fed,” and her diagnosis was “Imbecile.” She was discovered to have a throat infection. That was just the beginning. Illnesses swept the “cottage” she shared with over 100 other children. Margaret was sick over and over again with common childhood illnesses, and others that were less common; shigella flexnia, scabies, hepatitis. Multiple psychotropic medications were tried, and multiple restrictions imposed because she would not sit still and attend to tasks. It seems unbelievable now that a young child would be prescribed thorazine or tied to a bed with sheets because she wandered at night. Yet careful records were made of all of these horrors and more.

Margaret does not talk. She does not sign. She does not cry. Her body is a map of scars that I can’t read. We have gradually achieved a language of hugs and simple companionship, sitting together holding hands or with toes touching. She smiles and laughs. She moves quickly towards desired objects. She likes putting her shoes off and on, rocking, and twirling little stuffed animals. Her reaction to pain is rage, starting with a furious hum and escalating to smacking herself in the face or rubbing at her scalp, literally rubbing out patches of hair. For years I heard that this was “just behavior,” not communication.

Our journey together has had twists and turns. Dixon closed and I chose Howe Developmental Center, closer to my home. I was told, “Howe is like a country club.” It was not. I volunteered there, then actually worked there for eleven years as a state employee. I began to see that Margaret had no real quality of life and helped her move out. Since 2008, Margaret has lived in a CILA home (Community Integrated Living Arrangement) and has thrived. She enjoys choosing whether to hang out with housemates in the common areas or sit in her room, listening to music. She enjoys putting her possessions down and finding them still there to pick up later. After many successful years, however, her anxiety level started to go through the roof. Medical staff suggested a short stay in a small psychiatric hospital that treats elderly patients with disabilities. The upshot was that she had a urinary tract infection and was stressed out by her day program. Treating both issues turned her life around - a lesson for all of us.

Margaret is 78 now and I’m 68. Our mother’s dementia and last few years of life in a memory care facility are often in my thoughts. I believe that Margaret will want to “age in place” and stay in her own home for the rest of her life. She lost two housemates who stayed at home to the end with hospice care. I believe Margaret would prefer that arrangement rather than spending her last days in a hospital. I have observed her misery with short hospital stays. I hope to spare her pain or nonessential intrusive procedures. Our family lives out of state, so even though younger members are interested, I hesitate to involve them. Yet I’m aware that I don’t have a good plan for a successor guardian.

It embarrasses me when people say Margaret is “lucky” to have me as her guardian. I have made countless mistakes from fear of speaking up, from accepting what other people told me about Margaret, and from misunderstanding what she was trying to tell me.

In 2010, I began work for The Arc of Illinois. My job is to talk to families about community living for their loved ones. The Family Transition Project now includes six self-advocate mentors who mentor us by sharing their lived institutional experiences and perspective on the benefits of community life. What I have learned from Margaret has been invaluable in my work and can be distilled to this: I used to say I was a voice for people with disabilities. Now I want to empower self-advocates and families to find their own voices.

Sisters Katherine Hamann and Margaret Doering never met until they were adults. Today, Katherine serves as guardian to Margaret and is director of the Family Transition Project for The Arc of Illinois in Mokena, Illinois.