Nathan J. Wilson is an associate professor in the School of Nursing and Midwifery at Western Sydney University and president of the Professional Association of Nurses in Developmental Disability Australia, Inc. He may be reached at n.wilson@westernsydney.edu.au 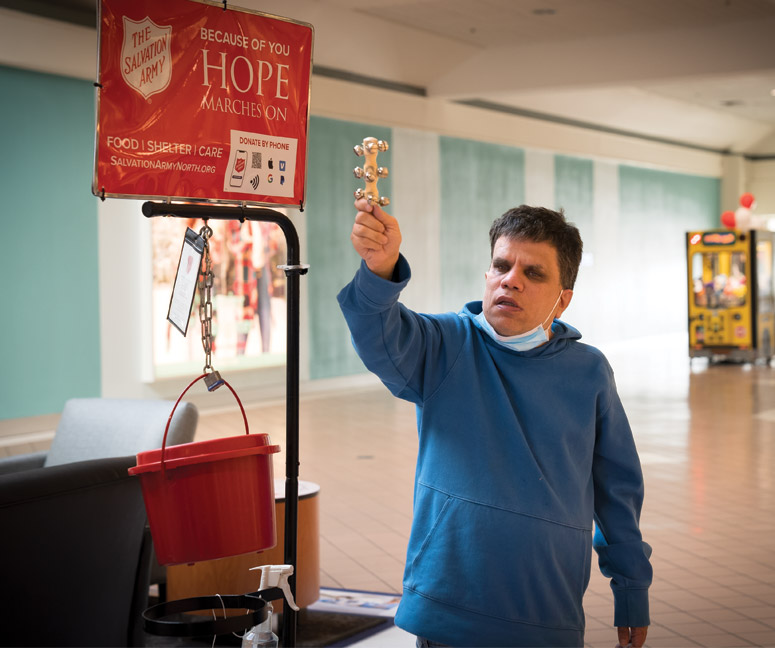 Volunteering in the community is one way to preserve a sense of purpose in retirement.

Retirement is a major life transition for all workers.Despite substantial attention to this issue throughout society, little is known about the retirement of people with intellectual and developmental disabilities (IDD) (Stancliffe et al., 2017). Most employment-related IDD research looks at the transition to work and the difficulties of getting and keeping a job (Nord et al., 2013). As life expectancy increases, more workers with IDD are reaching retirement age, so this transition is becoming increasingly important.

Retirement is typically planned to occur when someone reaches their mid-60s, but not everyone gets to choose whether or when they retire. Health problems, job loss, or caregiver responsibilities can each result in early, involuntary, or unexpected retirement. Some people keep working well beyond the typical retirement age because they enjoy their work and colleagues, and find it satisfying. Others are dissatisfied with their job and can’t wait to get away.

These factors also affect retirement by people with IDD, but there may be a different mix. Their work may be more physically demanding and their employment conditions more precarious (casual, part-time), known factors contributing to unplanned retirement. Fewer people with IDD have a spouse/partner, children or grandchildren, and more experience poverty and health problems that do people in the general population. Excessive fatigue, reduced productivity, disliking work, or reaching an age or employment milestone can each prompt retirement (Stancliffe et al., 2013).

What do we Know about Retirement and People with IDD?

In the United States, Stancliffe et al. (2018) reported that the percentage of individuals with IDD who are working falls steadily in older age groups, consistent with retirement in one’s 40s, 50s, or 60s. The percentage still working in the 65+ age group in mainstream employment (3%) was much lower than for sheltered employment (18%), indicating that some people continue working beyond the traditional retirement age and that this trend is much stronger for those in congregate employment.

Likely reasons for continuing to work in older age include enjoying work, worries about boredom and social isolation in retirement, or having little self-determination and knowledge about retirement options. Some people may also be discouraged from retiring by significant others.

Little information is available about the reasons for early retirement among people with IDD, or whether workplace accommodations, such as those to prevent mobility problems, could prevent premature retirement.

One consistent finding is that many people with IDD in sheltered employment are worried about retirement (Bigby et al., 2011; Stancliffe et al., 2017). They fear losing the sense of purpose and accomplishment that comes from working. They are concerned about the disruption of social connections with people at work, and feel anxious that retirement will mean social isolation and having nothing to do. This unease means people can be reluctant to move from a familiar employment situation to an unknown retirement lifestyle. Factors that may shape these views include lack of both positive role models and retirement planning.

Bigby et al. (2011) found that family and disability staff were also concerned about the person having too little to do, but thought that activities in retirement would or should be provided through a disability program, such as a day program.

What do People do in Retirement?

Given the fears about having nothing to do in retirement, it is important to understand the reality of retirement activities experienced by people with IDD. Stancliffe et al. (2018) reported that 50% of U.S. disability service users aged 65 and older attended segregated disability day programs and a further 32% did not take part in any structured out-of-home activities (including work), suggesting that the U.S. IDD service system relied very heavily “on facility-based services for older participants” (Stancliffe et al., 2018).

There are examples from Australia of older workers in sheltered employment settings who are transitioning to mainstream community groups for retirees (Stancliffe et al., 2013, 2015). While demonstrably feasible and beneficial, these outcomes have not yet become widespread.

Australians with IDD who retired from mainstream employment reported not participating independently in any mainstream community groups in retirement, despite decades of full inclusion in employment in their mainstream community jobs (Brotherton et al., 2020). They had a few ideas of retirement activities they might enjoy (including mainstream activities), but none had begun to participate, even though they had been fully retired for months or years.They had limited sources of information and support regarding retirement activities, and appeared to be waiting for others to plan and implement these activities. The researchers concluded that these workers needed preparation and planning for retirement while still working, plus support and training for participation in mainstream social activities when retired.

Brotherton and colleagues implemented an intervention that was similar to the Transition to Retirement program. Unpublished findings from this work showed that with skilled initial support, the program was very successful at enabling independent, socially inclusive volunteer activities and participation in mainstream community groups by older workers and retirees with IDD who had worked in mainstream employment. Importantly, this intervention was successful both for people who continued to work part-time and for those who had already retired. Joining these activities while still working appears to lead to a smoother transition from work to full retirement, because the activities can be continued in retirement. The evidence from such research can help to reassure older workers with IDD and their supporters that their fears about having too little to do in retirement and being socially isolated need not be the reality they experience when retired.

Mainstream research shows that pre-retirement planning is beneficial and people who have a degree of control over their retirement timing and transition enjoy better social and psychological wellbeing in retirement. Little attention is being given to retirement planning with people with IDD, however. This planning should cover finances, health, activities, and social connections, as well as considering how to deal with this major change and adjust to a new lifestyle.

One aspect of retirement planning involves understanding what the person gets out of working and how these needs can be met in retirement. Issues include:

Choice of retirement activities can be guided by this information. For example, someone who has difficulty with or does not enjoy extended conversation likely should avoid community groups where the main activity is conversation and should instead opt for a group where the focus is on practical activities of interest, such as arts and crafts, sports or other physical activity, or building things.

Reducing work hours in the period leading up to retirement is one way to prolong employment and ease the transition to full retirement. Brotherton et al. (2020) noted that 80% of their participants with IDD who worked in mainstream employment had reduced their average weekly working hours in the five years preceding retirement from 18.9 to 13.5 hours at retirement. Stancliffe et al. (2015) reported that 59% of the participants (most in congregate employment) who joined the Transition to Retirement (TTR) program were already working part time. As a result of the TTR intervention they further reduced their work hours and attended a mainstream community group one day per week (see the story Transition to Retirement ). Gradual retirement was common in these two relatively small Australian studies, but larger and more representative studies are needed before reaching any firm conclusions about its prevalence and benefits. By contrast, using U.S. National Core Indicators data on adults with IDD, the evidence showed that sudden retirement by older U.S. workers with IDD was more common (Stancliffe et al, 2018).

We need more information about various timelines and pathways to retirement. Also, factors that influence whether the transition to retirement is sudden or gradual, involuntary or self-determined, need to be studied to enable better-informed retirement planning and more retirement satisfaction and self-determination people with IDD.

The Decision to Retire

Throughout their lifetimes, people with IDD typically exercise less self-determination than do those without disabilities, and research suggests that other affected people (family, service providers, employers) often dominate the retirement decision-making process (Brotherton et al., 2020; McDermott & Edwards, 2012). Disability service providers get involved because the retirement decision has implications for the employment, supported accommodation, and day program services they provide. Webber et al. (2010) reported that many Australian group-home residents older than the usual retirement age were not able to retire from sheltered employment because group-home staff were not available during weekdays, so the assumption was that all residents would go to work or a day program. As one supervisor put it, “I think people just aren’t allowed to retire because there’s no staff at home.”

Brotherton et al. (2020) found that most participants who had retired from mainstream employment did so based on the advice of others (family, home support staff, disability employment support staff, employer) and framed the decision as something they had to do rather than wanted to do. A minority of participants were self-determined and pursued their intention to retire, but said their decision was driven by health reasons (Brotherton et al., 2020).

There is little information about the extent to which finances play a part in the decision of people with IDD to retire. Stancliffe et al. (2017) noted that there was almost no mention of retirement-related financial issues by older workers in sheltered employment, but some in mainstream employment were concerned about such issues. With much higher wages in mainstream employment (Nord et al., 2013), the gap with public benefits in retirement is greater.

While mainstream research shows that retirement is influenced by many factors, we are only beginning to learn about issues related to retirement by people with IDD. The current reliance on congregate disability programs for older adults with IDD suggests that innovation is needed to enable more people with IDD to experience an active, socially inclusive, community-based retirement. Encouragingly, research from Australia shows that these outcomes are feasible for former workers from sheltered or mainstream employment, but scaling up is yet to be achieved. We need to better understand what factors affect the timing, nature, and outcomes of retirement, so that people with IDD can experience their preferred retirement lifestyle.

Roger Stancliffe talks about his research on transitioning to retirement

his work in retirement transitions with self-advocates.