Paula Gann is a member of the National Task Group on Intellectual Disabilities and Dementia Practices and a founding member of the Coalition for Dementia Capable Services. She lives in Manchester, California. 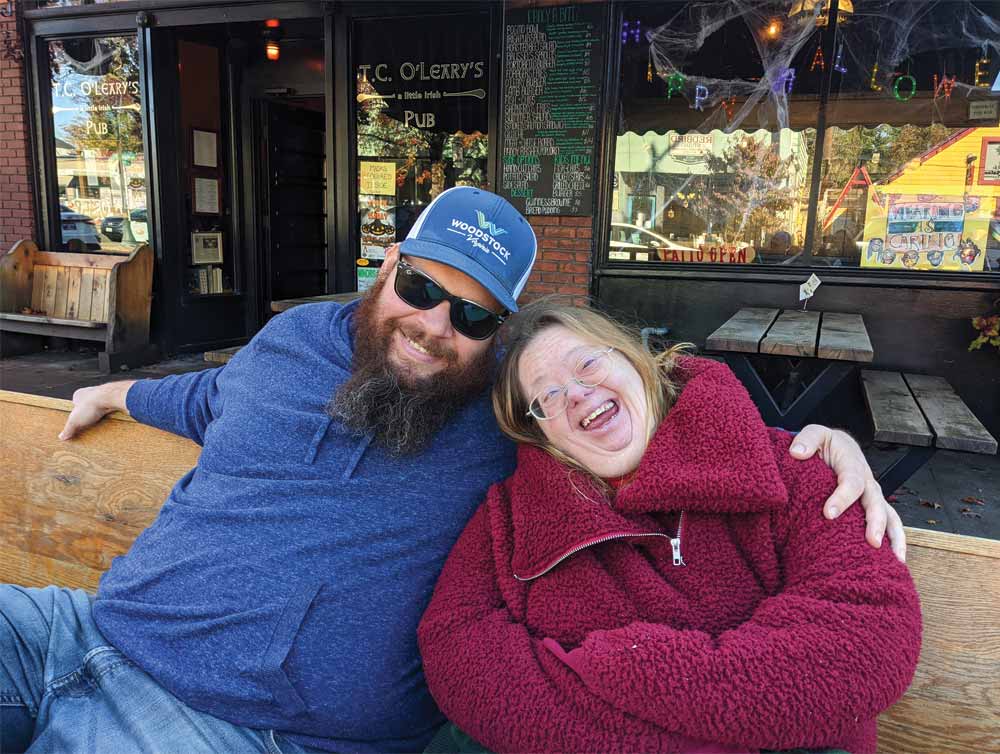 Siblings Blake (left) and Kyle Scrivner share a laugh during a family outing.

The day after our daughter, Kyle Scrivner, was born, two doctors came to my room to tell her father and me they suspected she had Down syndrome. That was more than 49 years ago. While in the hospital, I cried as I watched one of those Hallmark commercials thinking that she would never graduate from high school or get married. The thought of seeing her die before me was wrenching, but the thought of her outliving me was terrifying. What would happen to her? Time passed. We learned more. With guidance and love, she developed at her own pace and grew into a beautiful woman with a life full of capabilities and achievements.

Then, in January 2017, everything changed. I received a call from a psychiatrist who, having seen her only one time, wanted me to know Kyle had Alzheimer’s disease. He informed me that this was very common in people with Down syndrome, that it would move very fast and that I needed to make plans in a hurry. I was devastated. I knew nothing of the co-occurrence of Down syndrome and Alzheimer’s. I have since learned, after speaking to many overwhelmed family members, that I was not alone.

Even though 70% of people with Down syndrome over the age of 35 die of Alzheimer’s, her primary care physician knew nothing about it. Staff members of programs she was in knew nothing, staff at the local regional center knew nothing. I’d like to say the situation has improved since her diagnosis, but there is still a general lack of information among medical professionals and service providers and among family members of those with Alzheimer’s.

I dove deeply into learning everything I could about the disease. I frantically called my family and close friends together to discuss what was happening. I paid closer attention to Kyle and realized that when she repeated the same question over and over to me, it was not to drive me crazy, like I had thought, or because she didn’t like the first answer she got and was waiting for a better one. It was because she didn’t remember asking the question, much less the answer.

Searching online, I came upon the National Task Group on the Intellectual Disabilities and Dementia Practice (NTG). That led me to Mary Hogan, who was at the time very active in the organization. Her brother, Bill, a young man with Down syndrome, had died of Alzheimer’s and Mary wanted to help others by sharing what she had learned. She figuratively took me by the hand from her home in faraway Maine and led me out of a very dark place. I and many others owe an enormous debt to her. With Mary’s help, I learned what I could do.

In November of 2017, I discovered a study funded by the National Institute on Aging. The purpose of the research is to discover biomarkers for Alzheimer’s in people with Down syndrome. I enrolled Kyle in the study at UC Irvine. That was the first time I felt like I was speaking to medical people who understood what was happening to my daughter. They did not treat her like a person with a buildup of amyloids in her brain, but as the still-charming young woman she is. Eric Doran, a study leader at UCI, clearly liked and respected Kyle. She has had very long MRIs, PET scans, lumbar punctures, blood tests and hours of psychological tests. When Eric asked Kyle where they were and why he was working with her, she said, “I’m at a memory place and you are helping me with my brain.” 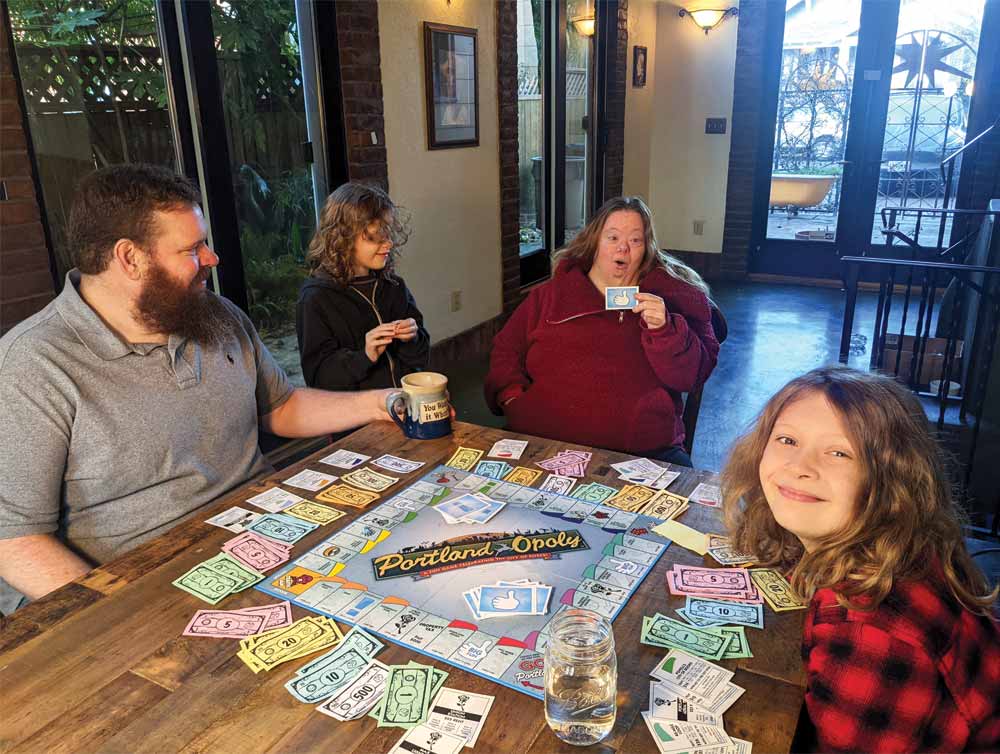 Kyle plays a game with her brother Blake and her nephews.

For future planning I tried unsuccessfully to speak to Kyle about her disease and death and what her wishes would be. I used myself as an example, saying, “When I die, I want everyone to have a big party and dance and eat and be happy. What would you like?” Her response: “I’m not going to die.” I said, “Kyle, everyone dies.” “Not me!” she replied. In the same hearty way, she always reassures me by saying, “Don’t worry, Mom, my brain is fine!” or “My memory is good.”

Before COVID-19 struck, Kyle’s life had changed very little. She lived independently with support staff. When I read seizures might become a part of her challenges with her new diagnosis, I insisted there be staff with Kyle when she was at home. Soon afterward, a seizure did happen. Kyle went down in her kitchen and there was a staff person there for her. Afterward, Kyle was prescribed medication and has had no more seizures. She went to her day program, continued to go bowling, walked on the treadmill, sang with the group and enjoyed those around her. Then COVID-19 hit, and she moved to virtual Zoom groups in the morning and afternoon. She seems to be holding on with only slow declines.

I know what is coming. I have heard from many others struggling to help family members with Down syndrome who are battling Alzheimer’s. I am on the NTG Facebook group for families who are dealing with the effects of Down syndrome and Alzheimer’s, and the Down Syndrome Connection of the Bay Area, an NTG support group that meets monthly via Zoom and has expanded nationwide. Seeing the overwhelming need for services, a group of us founded the Coalition for Dementia Capable Services for the Bay Area. The members of these groups support each other and share what is happening to their loved ones as they progress through every stage of the disease. It is painful, but it is an invaluable heads up for what is coming. 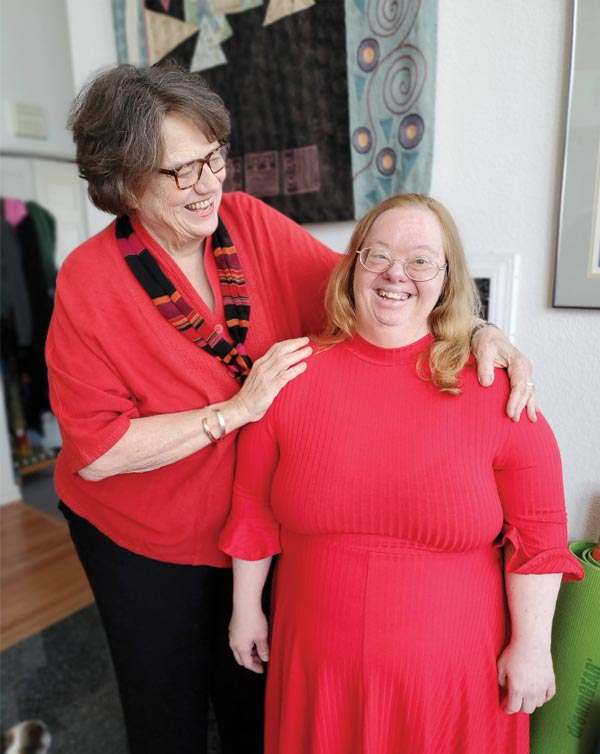 The author, Paula Gann, and her daughter, Kyle.

Accepting the reality of her diagnosis has been difficult. It’s hard for me to lose the Kyle that was. Where is the champion swimmer and gymnast in the Special Olympics? Now, when she’s walking from one color patch of surface to a different one, she hesitates, unsure of what is under her feet and afraid of falling. Is it a hole? Is it a step? What happened to the girl who learned all her lines as Dorothy in The Wizard of Oz and now cannot remember what she ate for lunch? Where is the Kyle who took three buses to Foothill Community College and then to a job? Now she cannot step off a curb without someone on either side to hold on to. I can see in the future a Kyle that will be doing the things she did in infant stimulation sessions so many years ago. I am losing my Kyle, more and more each day. It is a very painful experience.

Another element to this transition has been a challenge for me. I know that at 78 years of age, I must begin to relinquish the responsibility for Kyle that I have had since she was born. I am extremely fortunate to have a son, Blake, and daughter-in-law, Jackie, who have welcomed Kyle into their home. I know now is a good time for a change.She is still mostly aware of herself in space and time. The transition now from living solo with staff to living with family is wonderful timing. After settling in Portland, she will find a new day program and hopefully, eventually, a dementia capable home. It’s difficult for me to give up control of these transitions, and I worry about the stress the move may cause for Kyle, Blake, and Jackie.

During the pandemic, Blake and Jackie and their sons, Atticus and Atlas, moved from San Francisco to Portland, Oregon. I took Kyle to Portland and left her for a few days to see how it went. Did Blake and Jackie still want this responsibility? How did Kyle do? Aside from telling her nephews they were too noisy and needed to go to their rooms, she did well. Blake and Jackie didn’t change their minds, and they have involved Kyle in their family life and taken her out in the community. We’ve started doing research about available services for Kyle there. Moving from California to Oregon is not easy, and Kyle must live with Blake and Jackie and the boys for three months before she will be eligible for services from the state of Oregon. With all the challenges families face, the state making it more difficult is unconscionable. But that is what is happening.

In September 2021, we had a family Zoom meeting with Blake, Jackie, my older son Sean, Kyle and me and we told her she was going to be moving in with Blake and Jackie in October. She pumped her arms and said “Yay!” We all let out the breaths we’d been holding. She occasionally forgot the moving date or which brother she would be moving in with, but once she arrived at Blake and Jackie’s house, everyone started settling into the new routines.

We are now beginning to look for a home that will be able to meet her needs as her disease progresses. She'll require a wheelchair, and then help eating, bathing, and dressing. Then she will finally transition to hospice, where she can die with dignity. Her family will be there with her, supporting and encouraging her along the way. The foreseeable future is hard to look at, so we just try to focus on each day. And when she says, “Mom, I’m wonderful, nameen?” I say, “Yes, Kyle, I know what you mean, you are wonderful!”