A Bridge to Joy

Michael Grace is a Project Search intern at Children’s Minnesota in Minneapolis.

Liz Hannan is Michael’s mother. She lives in Minneapolis, Minnesota. 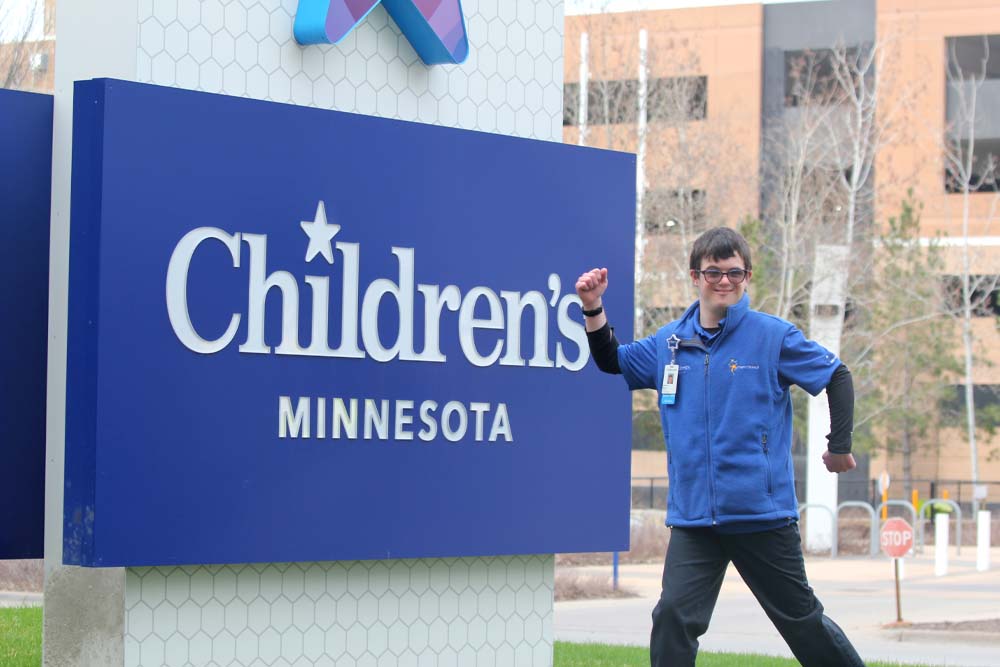 The transition years really start in middle school and high school, when expectations for the future from family, teachers, and community set the bar and support students’ hopes and dreams. For us, this bar was set quite high, because Michael, who has Down syndrome, was fully included with his general education peers from kindergarten through high school. He was in clubs and activities, lettered on the high school golf team, and was voted prom king his senior year. He graduated in 2019 and attended transition services, which we refer to as college prep as a way to frame it as another step towards eventually attending college. At first, we were unsure about going to a separate environment after high school, but Minneapolis has a public transition school where staff were very positive and accommodating.

I (Michael) am completing my third year at Transition Plus. I’m a Project Search intern at Children’s Minnesota (a pediatric hospital system). On Mondays and Thursdays, I work on the 6th floor, stocking gowns, masks, gloves, and other supplies. This helps the nurses and the patients who are sick. It’s important work, and it was easy learning how to do my job. Also, I volunteer once a week at Star Studio, the in-house television studio at Children’s. After college, I’d like to get a job working at a similar place because I love performing and making kids happy. 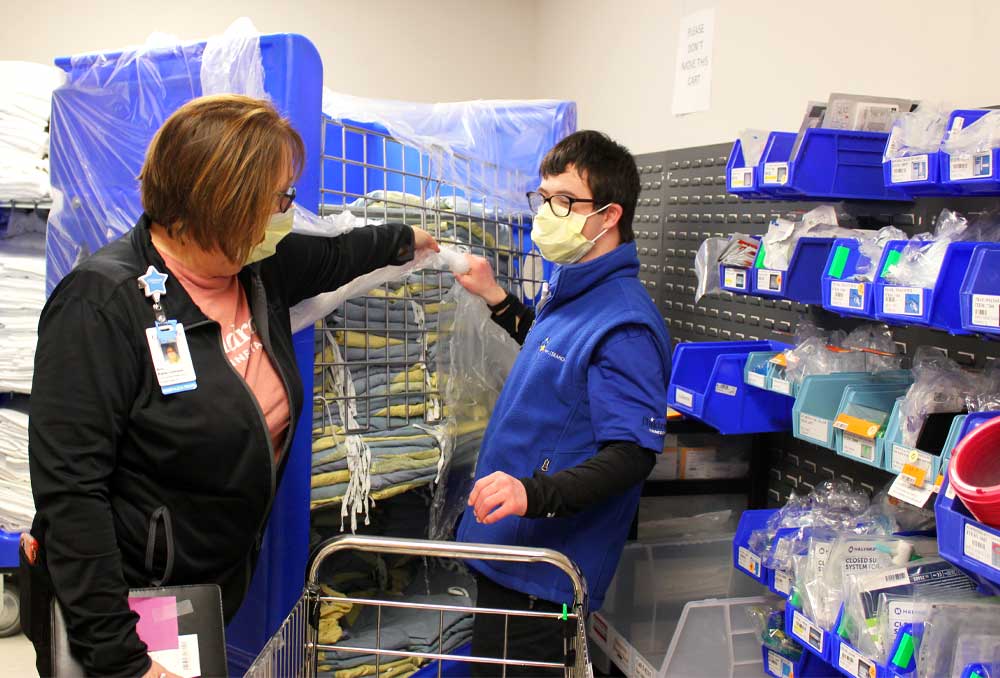 Michael Grace talks with his supervisor during a shift at Children’s Minnesota.

For me (Liz) and the rest of Michael’s family, Project Search has been an amazing bridge as we support Michael’s transition from school to employment. Michael loves Children’s, where he has been both a patient and a volunteer. The Project Search staff has helped him grow a lot and develop skills that will serve him well. He applies what he learns immediately in a real job setting, rather than a simulation lab.

Where is all this leading? After graduation from Project Search, Michael will look for competitive, integrated employment while he continues to plan for college. Going to college, like his peers and siblings, has always been Michael’s goal. It has been a struggle to make that dream a reality due to few options for inclusive postsecondary opportunities in Minnesota, however. Because there aren’t many options, there is also a lack of awareness and support in planning for college for students with intellectual disability.

During high school, Michael went on college tours and researched colleges online. He also had paid summer jobs and performed with a St. Paul, Minnesota dance company, Young Dance, and 3 Strings band in Minneapolis. After high school, Michael and other students who participated in 3 Strings returned weekly as paid company band members.

This spring, in addition to his internship, Michael audited an Introduction to Acting class at Minneapolis College. It took some time and persistence to arrange, but with support from his school case managers and vocational rehab services, the class went really well and Michael demonstrated once again what he can do given the opportunity. He has an awesome professor, and an aide from our school district attended class and took notes for him. He likes acting, his professor Brian, and making new friends in class. He enjoys Shakespeare and improvisational acting. 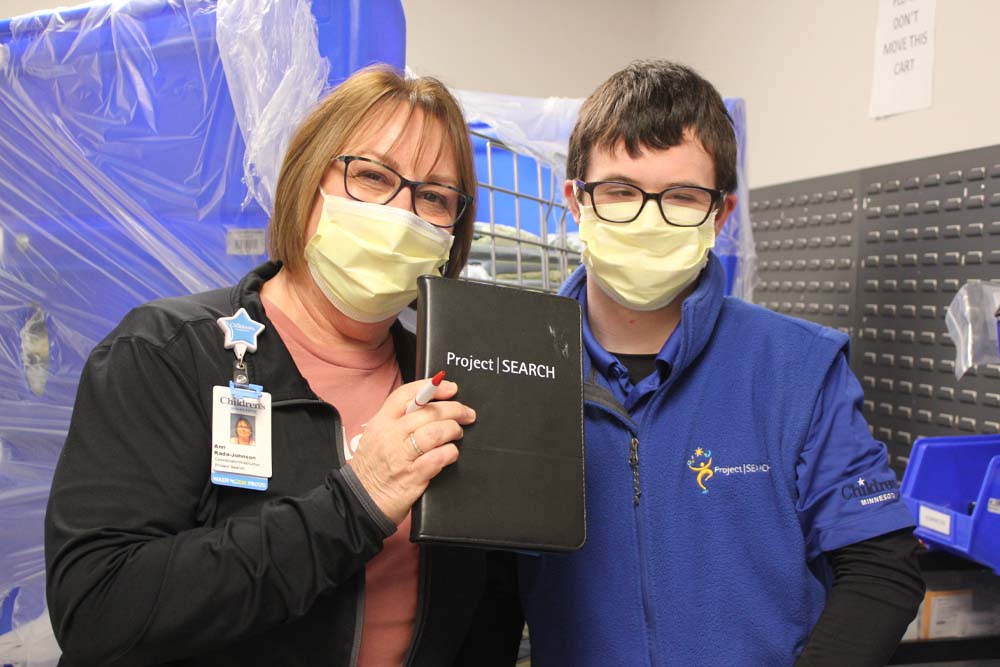 Michael is also a paid teaching apprentice with Cow Tipping Press, an organization that offers inclusive writing opportunities for adults with disabilities. He loves expressing himself through poetry, and the Cow Tipping model gives him and others with disabilities a voice to do so. He also participates in Special Olympics, which has provided both sports and social activities. While so many things end at age 21, this and several other activities will continue. It is so important for Michael to maintain the relationships he has built over time, which can be challenging.

Our hope is that these experiences will pave the way for other students in their transition years. There are currently limited numbers of inclusive college initiatives in Minnesota, and we are looking forward to expanding those opportunities. It is so important for students to have options for inclusive higher education close to home so they can build on existing communities of support, as opposed to starting over in a new place.

As Michael moves on to the next stage of life, his family will continue to support him and his dreams. These include having good friends and healthy relationships, being a lifelong learner, a contributing member of his community, a volunteer, and an active and healthy person; pursuing new interests as they come along; and finding joy in his life.

| This video tells the story of the creation of Project Search, now an international program providing training and on-the-job experiences for young people with disabilities.