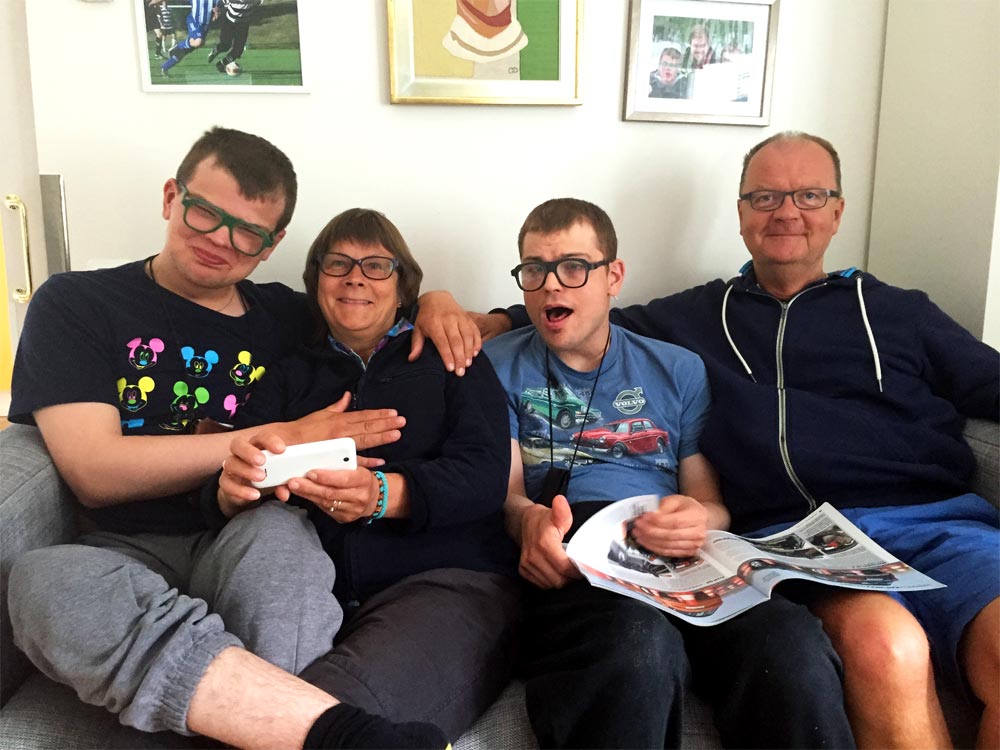 The Pinomaas gather a few years after the move to Star Home. From left: Robin, Marianne, Markus, and Jyrki.

One of the key transitions in the lives of people with intellectual disability and their families is, without hesitation, the time when the child moves out of the family home. Twenty years ago, when our two sons, Markus and Robin, where approaching this milestone in their lives, the options were scarce. The available model was a group home with a lot of shared space with other residents.

At that same time, a paradigm shift was underway. People with disabilities were becoming equal citizens, de-institutionalization was the direction, and the outlines of what would become the United Nations Convention on the Rights of Persons with Disabilities began to take shape.

For us as parents, it was clear that our son Markus, born in 1986, would be entitled to a life of his own, just like his older brother and younger sister. So, in our family, we always had the idea of him moving to a home of his own.

When Markus’ younger brother, Robin, was born in 1991, we understood that both brothers would someday need a place to live and they would move out of our home together. They had become very close for many practical reasons, like their concurrent rehabilitation and respite care periods to allow the rest of the family some free time, their joint taxi rides to school, and so on. They needed each other, and they needed security and stability to continue living with each other.

During 2004, we started discussing, along with the other parents of the students in Markus’ and Robin’s school, the future living arrangements of all our children. Nobody was happy with the idea of group homes. We knew that our children had the same rights as everybody. We learned of better solutions, especially in our neighbouring country Sweden.

As a group, we decided to start planning a house of our own with our children as they approached adulthood.

We were like-minded parents from eleven families with altogether twelve young adults moving out from their childhood homes. We had the same minority language and cultural backgound, we shared peer support, and we were unyielding advocates for the rights of our children. We formed a well-functioning working group. We had a clear, common goal, and a dream we were determined to make come true.

Little did we know what we had ahead of us when we started. Eight long years later, however, we celebrated the opening of Star Home, as we had named it. Our goal was to become a star example to all others, a leading example of how people with intellectual disability can live and be included in the community.

We met regularly, once every two months. We knew each other, and our children were friends and classmates. They had already formed a group. Our children had different needs, which all should be taken into consideration in the floor plan. We had many ideas when we started planning of the layout.

After numerous meetings and a lot of planning, we concluded that it is neither the floor plan nor the walls that make the house a home. It is the staff with a big heart that makes it a home.

So, we left the layout to professionals. Our task was to pave the way for the young adults’ transition and to plan how we could support the future staff in their work.

Two years had passed when we contacted a Finnish housing foundation with an innovation called “the two-door model.” This was based on each young adult having a real home of their own. A home consisting of their own front door, living room/kitchen, bedroom, bathroom, and a second door leading to the service provider’s and common premises. The perfect model for our group!

We now had a contractor to build the house. The foundation’s subsidiary, a service-provider, could provide the help and support needed. A building plot in the middle of a detached-house community was found and reserved. We had an address to visit, in a nice neighbourhood.

We did visit that address regularly with Markus and Robin to familiarize them to their future home’s surroundings. We started talking about the “new home” with them, but there was one problem. They already called their respite care “new home” and now we seemed to be mixing them up. Sharp as they were in forming meanings, this one became in their vocabulary “new new.”

Abruptly, our project came to a stop. Like in so many similar projects, we ran into a phenomenon called NIMBY (Not In My Back Yard). When the neighbourhood found out about a house for people with disabilities being planned in their area, they made a complaint against building it. There was no real reason, other than the fact that when people do not know enough about disability, it tends to create fear. This was more a rule than an exception when trying to build houses for people with disabilities.

Complaints take time away from progress, but cannot stop strong advocates like us. We continued with our plans and visits to the building plot. Ultimately, the formal complaint was not successful, as they seldom are. Finally, the building plot and the house itself started to take shape. We started perceiving the different apartments there and could “go into” Markus’ and Robin’s new homes. These visits were essential and gradually the brothers got to know “new new.”

Half a year before the actual move, we were offered a unique opportunity. A ceramic artist had heard of our project and got inspired by the name Star Home. Together with the future residents, she wanted to make a large wall mosaic artwork in one of the common rooms. This was a huge kick of luck for us as we became busy working together the next six months.

Every Wednesday, each of the future residents was given a sector of the artwork to make. They worked on it together with a mother or a father. The artwork consisted of 64 different sectors, each with 225 small mosaic tiles. Eventually, 27 of the sectors were finalized by the five participating residents.

Today, this fantastic artwork, “The Four Seasons,” decorates a wall in Star Home, creating a hint of the atmosphere of an ancient Roman spa. The room was named Mosaic Room accordingly and it is today a cosy, all-activity room in Star Home.

The house itself was eventually completed and was preparing to welcome its residents. We and the brothers were ready to face a new phase in our lives. Markus and Robin were eager to move to “new new.”

Since the opening of Star Home a decade ago, there have been ongoing staffing issues. We’ve had five directors, an endless stream of changing employees, temporary manpower, and a change of service provider. Markus and Robin are incredibly flexible. With their unbelievable built-in elastic force, they have managed through this huge parade of changing hands and faces around them.

We did everything in our power to make their transition as smooth as possible, but some things are beyond our power. The process we have lived through during the past ten years is another story, it would need another article, if not a whole book of its own. So much has happened, so much did go wrong.

Still, Star Home continues to be Markus’ and Robin’s home. Do they understand it? I cannot tell, because in their world it is not the goal but the movement that is important. They always seem to be expecting the next move to happen. When they are in Star Home, they communicate about going someplace else. When they visit us, they are eagerly leaving for “new new.”

A hint of their perception of home was revealed when the pandemic broke out in 2020. For thirteen weeks, we were totally isolated from Markus and Robin. The only contact was through video calls. Through those calls, their main message to us consistently was their sign language sign for “home.” They wanted to come home to us.

Initially, this made us feel sadder, especially because we had no idea how long the isolation would last and because we didn’t know how to explain the situation to them. We are a deeply connected family, but Markus and Robin have lived with housing interruptions their entire lives due to respite care and their own hospitalizations. I suppose their childhood home is still their safe harbor, but their “new new” is equally important – to them and their futures.

Letter from our president: 13 weeks of heart-breaking separation

writes about his experience in Finland in times of COVID-19 emergency.