Joseph Faddoul is Julian’s father. They live with their family in Sydney, Australia.

What strikes us most about our son Julian’s transition from high school to working life is how wrong he keeps proving us to be.

As he grew up with autism and intellectual disability, our expectations for his adult life were pretty low. We were reluctant to send Julian to public school for grades 11 and 12 because he and our other children had always gone to Catholic schools. Making the move to the public school provided so much more than what we were asking for, however. 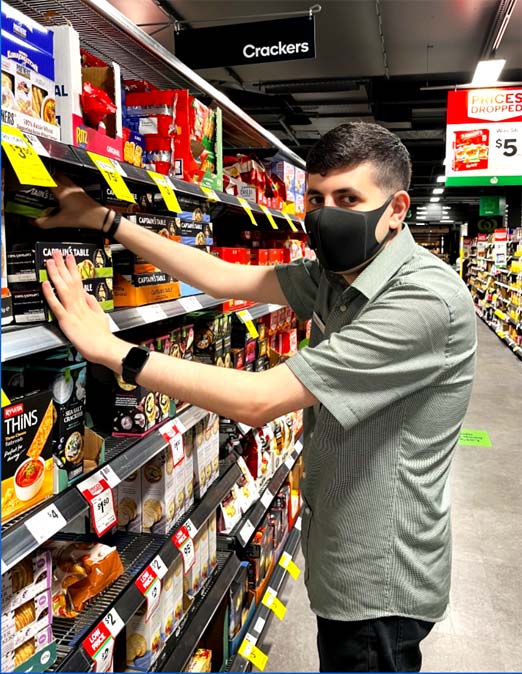 Job shadowing was critical for Julian Faddoul, who works in a Sydney, Australia grocery store.

Julian connected with the Jobsupport organization near the end of high school and focused on the life skills he needed to have a level of independence we didn’t initially think was possible. Starting out, he spent six months learning the public bus system. I still remember the first few trips he did on his own. We were holding our breath the whole time.

Today he commutes to a part-time supermarket job five days each week, buys his own lunch in the food hall, and comes home happy. After initially having a Jobsupport coach shadow him for the commute and throughout the day, today he’s on his own for the most part. He gets really good feedback from the store manager at the supermarket, who says they like his can-do attitude and that he brings smiles to co-workers faces every day.

At first, he worked in different locations and roles through Jobsupport. He worked in a hospital and a factory, but we found that working in the supermarket, where he can interact with people, would be best because verbal communication is a challenge for him, so it’s a chance for growth.

The shadowing was so important. It was crucial in giving him the confidence to do things with support that wasn’t coming from his dad or mum. No one shadows him now. Once or twice a week, they go to the store and make sure everything is running smoothly. Julian earns about $170 per week, not enough to live on, but enough to give him some extra money and the freedom to choose how to spend it. As he progresses in skill level, his hourly pay can rise, but due to the public assistance system in Australia, there is a cap on what he can earn and still keep his benefits. Right now, I can’t picture him doing more complex jobs, but we didn’t see this job happening five years ago.

He has come such a long way since that day when a Jobsupport person came to the house to accompany him to work. Julian refused to leave his room that day. The Jobsupport person said he could come back another day, but I took the day off work, forced the issue, and the three of us got on that bus. When we finally got there, Julian said, “It’s OK Dad, I’m safe. You can go home.” That brought tears to my eyes. If I didn’t have Jobsupport the next day, and the next, I would have had to quit my job. There are other organizations that do this work, but this has just been a good fit for us.

Julian expresses to us that he’s happy to earn his own money to buy clothes, food, and games, but he doesn’t have a lot of other drivers to work. I think sometimes we presume too much about how fulfilling work can be. For Julian, his prayer groups are more important. He prays every night and morning, going on YouTube for church services. And every day at 3 p.m., his grandmother rings and they do the rosary. His highest priority in life is spending time with family and he creates his own chats with cousins, siblings, and others on WhatsApp.

At the same time, the job does provide him independence and something to look forward to each day. There is no silver bullet to making this all work, but it comes down to having gratitude for the progress he’s made and for what he continues to give our family. We are very close, and Julian is a big part of the reason for that. He has made all of us less judgmental and more accepting. It has been the biggest relief a parent could have, knowing their child is safe and can, with some assistance, live a life of his own.