The Interview: Employer Perspectives on Transition

Andy Traub is a principal with Global Disability Inclusion, a consulting firm that provides disability inclusion strategies for global clients. He may be reached at andy@globaldisabilityinclusion.com.

Janet Stewart is managing editor of Impact. She may be reached at stew0390@umn.edu

In an interview, Traub explains why and how AMC Theatres began working with local school districts to hire young people with autism. He remembers that the president of the Autism Society of America said if AMC Theatres could hire young people with autism to work in jobs that involve working directly with customers, that would be “something that no one has done before.”

Company officials learned right away they had created barriers for people with autism. They changed the way that they interviewed job candidates so they wouldn’t unfairly overlook good workers.

They also considered sensory issues in the theatres, such as bright lights, sticky floors, and a big temperature change if workers were near the popcorn popper.

Andy Traub, a former AMC Theatres executive, now counsels global clients on making their hiring and retention policies more inclusive. He recently sat down with Impact managing editor, Janet Stewart, for a discussion on what employers want from the transition field.

Welcome, Andy. Take us back to your time at AMC Theatres, when the U.S. company worked with a local transition program to hire young people with autism for movie theater jobs.

Andy Traub: AMC had been doing sensory friendly film experiences for customers since 2007, and we won an award for that a couple of years later, so our CEO, Gerry Lopez, went to this black-tie event and got caught up in the great vibes that were happening. At one point he asked, ‘What else can we do?’ The president of the Autism Society of America at that time, Scott Badesch, said that if we could hire individuals with autism to work in the customer-facing roles in our theaters, that would be something that no one has done before. Gerry said to me, I want you to figure out how to hire people with autism in our customer-facing jobs.

Quite honestly it was a project that scared me to death. And I think that’s where a lot of employers fall. I didn’t want to screw up, or be on the 6 o’clock news, with someone saying, “Well, they tried to do good but they screwed it all up.” So that’s a fear, negative PR.

Anyway, I called the Autism Society and I said, help me get through this. I don’t know enough to be able to pull this off and so we sat down for three days of breakfasts, lunches, dinners, drinks, and everything in between – 13 people from around the country. And we realized quickly we had erected barriers with completely unintended consequences. Applicant tracking systems that timed out too soon. Assessments we created that everybody was using to narrow down the funnel that actually got rid of neurodiverse people really quickly. And we had just launched a new applicant tracking system and assessments the year before. That was tough to swallow.

We even tasked our applicant tracking company, saying this isn’t working, and they said we’ll put it on the road map. And we said, the road map has to be tomorrow or we can’t do what we want to do. We went from that initial meeting to making our first hire in 90 days.

We partnered with the local school district’s transition program, because I figured that was the safest place to go versus me trying to recruit people. They helped us change the way we interview people. We got rid of paper-based interviews and interviewing people in a 12-by-12 office with no windows. We created the traveling interview, where you can see all the parts of the building. Our general managers had to take ownership of this. It wasn’t something for an inexperienced staff member to take on. Leadership had to own it.

The environment is where we made a huge pivot. Being behind the counter from a sensory perspective, what’s that like? I have bright lights in my eyes, I have a 14-layer point of sale system, I have sticky floors and a significant temperature change the closer I get to the popcorn popper. All of those things we hadn’t thought about before. And then the weed-out interview questions, like, “What would you do if you found $20 on the floor?” You and I might be able to play that game and give the “right” answer, versus the honest answer, which we got from about 90 percent of the people we asked with autism, which was put it in their pocket. Then we thought, what are we really asking? If we train them on what they’re supposed to do with anything valuable that they come across and then ask them if they are OK with that and they say yes, then we move on. So, we did that. There were several lightbulb moments, including a piercing question from the mom of one of the five finalists we were interviewing for that first hire. She asked me what would happen if her daughter went through all the training and the interview process and wasn’t the one selected? I said if we do this right, your daughter will get fewer “No’s” as she moves forward. We ended up hiring someone who went on to score higher on metrics than any previous employee, with or without disabilities. 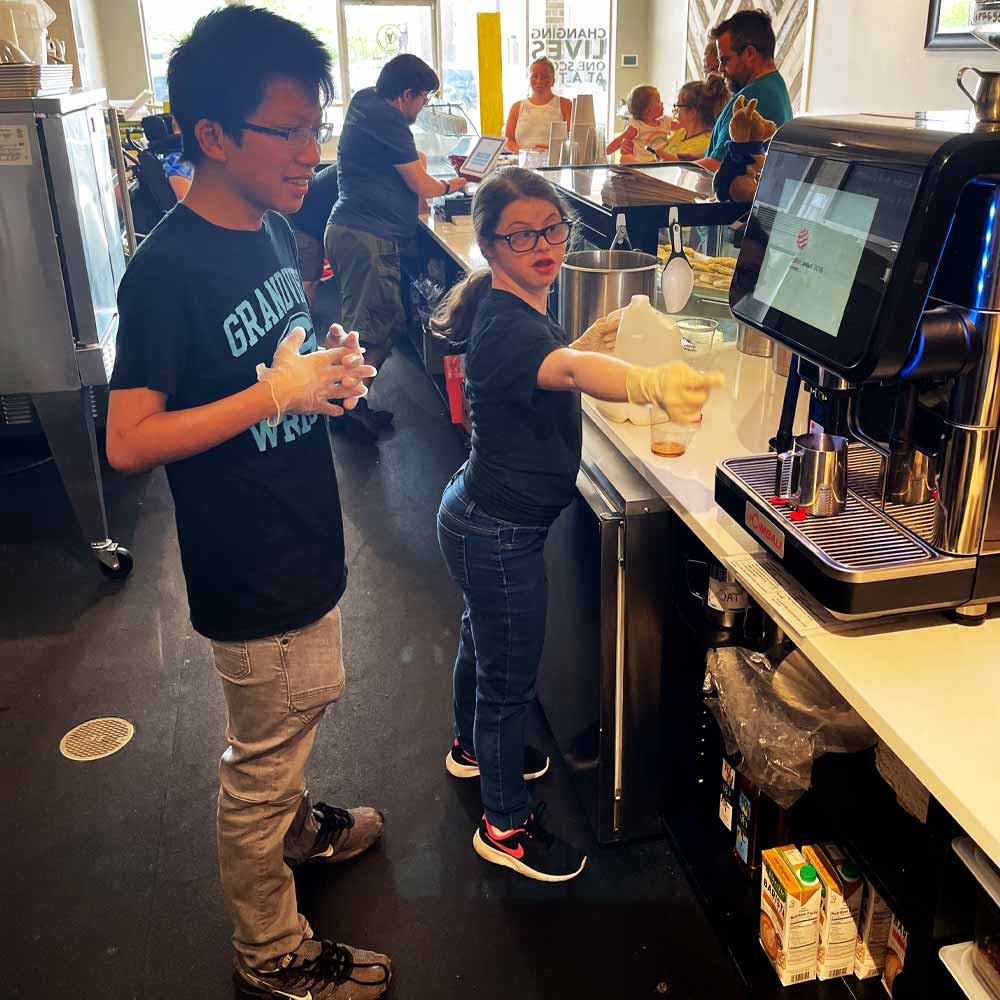 The author is a disability inclusion consultant to The Golden Scoop and other transition programs and employers in the United States and globally. Photo courtesy of The Golden Scoop, Overland Park, Kansas.

What were the stumbling blocks?

One was logistics. Job coaches through the transition program were only available during school hours. Yes, we’re open at that time, but there isn’t a lot happening. We had to petition the state in order to get a job coach to come during non-school hours.

What are employers missing in this discussion?

We don’t look at talent for what people can do. We get caught up in our own biases. When we work with organizations, we get companies to understand what they need to do internally to retain people they already have who have disabilities that are undisclosed. We always have this cookie cutter template in mind about what type of person will be good in a certain role. We need to focus on the skills and not all the other stuff.

For example, some managers say that candidates who aren’t making eye contact aren’t interested in this job. They could just be nervous, and we’re kicking people out of our hiring processes before they have a chance to perform. Employers need to look at every aspect of their hiring process like they are a secret shopper. What is it like to be an applicant at your company?

Are there government policies, legislation, or programs that employers say are helpful or unhelpful? Some countries impose hiring quotas or tax incentives, for example. What works?

That’s really hard, especially from a global perspective. In the United States we have programs, state or federal, and some of them have teeth, some do not. Some have funding. Employers are wary of the logistics, and some states are significantly behind in granting the incentives businesses were supposed to receive. The European Union has some promising partnerships between government and employers and I’d like to see more of that around the world. Whatever we come up with needs to be a sustainable strategy. If it can be changed with the stroke of a pen by a legislature, it can make us dead in the water.

Is the renewed attention to diversity, equity, and inclusion in workplaces translating to more job opportunities for people with disabilities?

There was momentum that actually stopped during the pandemic and in the aftermath of the murder of George Floyd. We were working with a large employer who told us that not one time in the last two years of working on DEI efforts was disability brought into the discussion. The CEO was embarrassed. He said, “How did we miss this?” Now, I think there is a sense that organizations are starting to wonder why they can’t find employees. They’re willing to look differently at how work gets done. Organizations spend billions on research and development. What if we deployed some of that into the recruiting of the workforce of the future?

We have a survey we developed with Mercer called Amplify, which businesses can give to their employees. If you really want to know who you are as a company, see what your employees say. Based on the analysis of the surveys we’ve performed, people with disabilities are less engaged at work. They feel forgotten and left out of opportunities for advancement.

What can the transition field do better?

Communicate. Work with employers to know what openings will be coming down the road. Right now, everything is transaction-oriented. When students reach 21, we lose funding for them. Why not partner with businesses to interview people coming out of these programs so that there is a path forward?

Businesses that educate their teams and empower them to do the right thing will see their teams evolve. It’s not an HR thing or a charity thing. We’re talking about impacting your workforce in ways you never thought could be done. It’s the fear of the unknown holding us back. It’s being willing to have your lenses tweaked, because if you’re not moving toward something, is it really transition or is it just getting kicked out of where you’ve been?