Transition in Times of Crisis

Renáta Tichá is co-director of the Global Resource Center for Inclusive Education at the Institute on Community Integration, University of Minnesota, in Minneapolis. She may be reached at tich0018@umn.edu.

Safia Dockter is a research assistant and developmental psychology student at the University of Minnesota in Minneapolis. She may be reached at dockt061@umn.edu

The time of transition from high school to adult life is an important time for all students, and especially students with intellectual disability. It is a time of exploration and preparation that can bring excitement, uncertainty, and even a touch of worry. Many factors can change the opportunities available to a student, such as the type of disability they have, how close they live to a college program that interests them, or the number of jobs available in their community. When crises happen, such as floods or tornados, these options became more limited.

The people of Ukraine are in crisis. OnFebruary 24, 2022, their country was invaded by Russian soldiers. Many cities have been destroyed and tens of thousands of people have been killed. Many of the estimated 2.7 million people with disabilities have been able to escape with help from organizations like Inclusion Europe, but many others did not leaveUkraine because it was hard to travel with a child or young adult with disabilities. They are now struggling with basic needs like getting enough food, medications, and staying safe from the war that is going on around them.

When countries are at war, it becomes difficult for youth with disabilities to have control over their day-to-day lives, and even more difficult to prepare for an uncertain future. The United States is one of only a few countries to have laws, funding, and policies that protect transition services. When crises occur, communities in the United States can typically rebuild and continue offering services to youth with disabilities. When countries do not have the same type of policies and resources, people with disabilities, particularly those with the most significant disabilities, are often left behind when disasters happen.

We must work together so that those with disabilities have the chance to be safe and able to grow into the person they want to be. That means sharing the resources we have with the people who need them across countries and cultures. 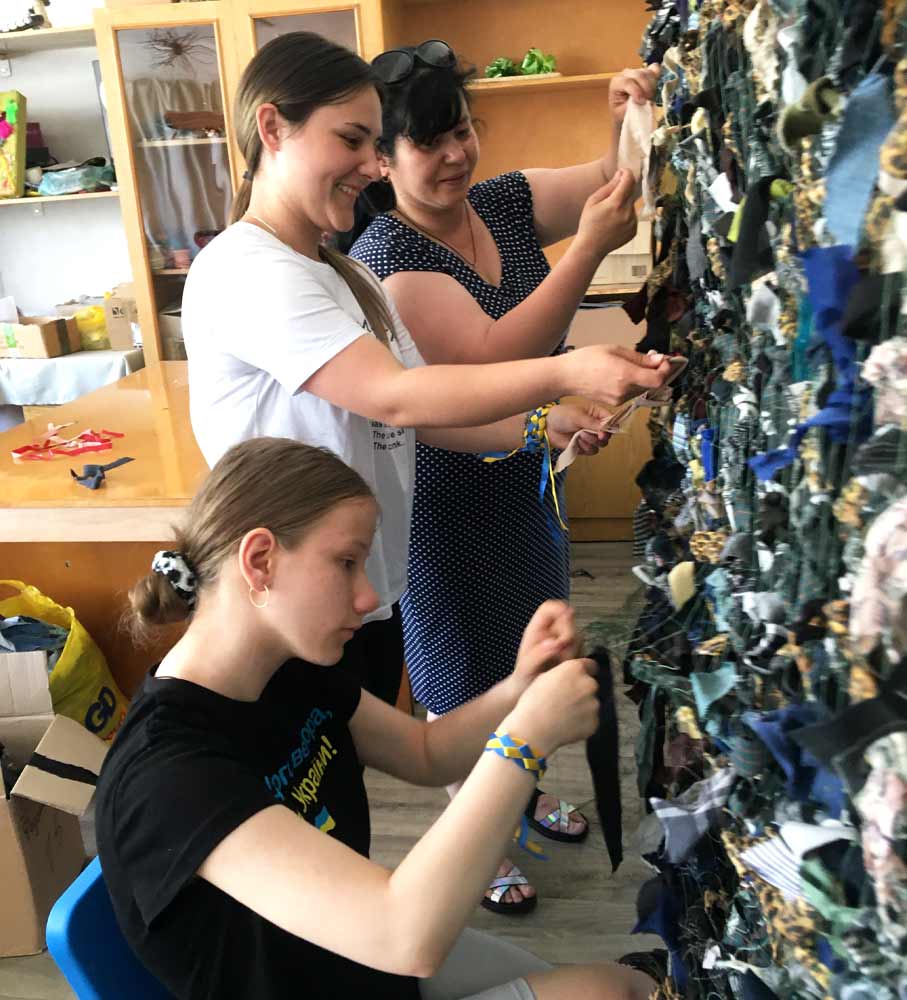 Volunteering together through United by Love, a Ukrainian community group for people with and without disabilities, Zlata Magomedova, 13; Khrystyna Melnyk, middle; and Zlata’s mother, Natalya, help make camouflage nets for the war effort.

Secondary transition for any student, but especially for youth with disabilities, is a time of change, uncertainty, exploration, and new beginnings. Transition from high school to adulthood typically means a mix of positive experiences and various challenges, shaped by many factors, including where the person lives, their family situation, training of staff, and the issues specific to the person’s disability. A young person with intellectual disability (ID) that is not considered significant who goes to school in an affluent neighborhood in a city that has a university program that prepares special educators to work with transition-age youth will most likely have a different experience and outcomes than a young person with significant disabilities growing up in a rural area that has recently been affected by a natural disaster, such as a flood. At an international level, we also need to consider whether a country has educational and vocational policies related to transition, and funding connected with those policies. In general, countries in the Global South (e.g., sub-Saharan Africa) or Eastern post-Soviet countries lack policies and funding to assist with the transition from school to adulthood for students with disabilities. In addition, there is limited awareness and infrastructure in these countries in the areas of employment, postsecondary education and active citizenship for youth leaving high school.

Many countries and regions around the world have been affected by natural or human-initiated disasters, including earthquakes, tornados, droughts, pollution, epidemics, wars, and gun-violence.

The Case of Ukraine

Ukraine is the largest country in Eastern Europe, and many of its cities have been destroyed by the Russian invasion that began on February 24, 2022. Some media have estimated Ukrainian war casualties of 20,000 per month, with many homes, schools, universities, hospitals, stores, and businesses destroyed by bombs. According to the European Disability Forum, there are an estimated 2.7 million people with disabilities in Ukraine. With no established formal transition services for youth with disabilities in Ukraine, any informal supports at the school or family levels had to refocus solely on survival, either inside or outside the country. Many children and youth with disabilities lost the minimal support they had in school. Those who stayed in Ukraine, often because it is difficult to travel with a child or young adult with disability, especially during a war, are trying to secure a safe place to live. They are searching for access to food, water, and medications. Humanitarian workers cannot enter these areas to help them. Thinking and planning for supported employment, choosing where or with whom to live, or engaging in community activities as transition activities have been overtaken by focusing on basic survival needs.

As in any challenging situation, however, there are always pockets of hope. Universities, schools, religious organizations, and businesses not affected by the war in the worst way (in Western Ukraine), and many organizations and individuals from abroad, have developed online education opportunities and provided supplies.

Many families or individuals who have been able to leave the country to escape the war with help from human rights and advocacy organizations (e.g., Inclusion Europe, UNICEF, etc.), have found new opportunities in other countries or regions. Many families with children and youth with disabilities, as well as groups of people with disabilities who lived in institutions, have relocated to Poland and neighboring countries. As part of the European Union, Poland has a more modern infrastructure in healthcare, education, and disability services, including in transition. Inclusion Europe reports that individuals with disabilities who have been able to relocate to countries such as Poland, Slovakia, or the Czech Republic have begun to have access to transition services and supports that were not available to them in Ukraine.

Other Countries Affected by Disasters

Ukraine is not the only country to experience war, and millions of other children around the world have been put in danger of some kind. Afghanistan, Ethiopia, Armenia, Palestine, Haiti, and Sri Lanka are just a few that have experienced devastating natural disasters or wars.

Youth with disabilities do not typically have opportunities to control their lives during these turbulent times. They spend all of their lives either living in institutions, being dependent on their families, or in worst cases, do not survive beyond a very young age. The type of disability, gender, religion, and socio-economic status all play a role in the quality of life for an individual with disability, including during transition. When a disaster breaks out, people who have the least voice suffer the most if they stay in their countries and often also as refugees.

There is an enormous inequity in the way youth with disabilities experience transition around the world. The United States is one of a few countries with a policy, funding, and services infrastructure for secondary transition for youth with disabilities. While there is violence as well as natural and human-initiated disasters, youth with disabilities and their families have access to services and supports as mandated by U.S. law. There is an emphasis on self-determination, community inclusion, and employment. If a disaster happens, in the majority of situations, communities have stepped up and used the infrastructure, policies, and disaster funding in their state to heal and to rebuild.

If such a backbone of supports is not present in a country when a disaster occurs, it is up to the individuals and families to fend for themselves, leaving those with the most significant disabilities behind. Often, this denies them the opportunity to reach adulthood with dignity, or at all.

We owe life, and life with dignity, to each other. Across countries and cultures, we must share our knowledge and resources, and work together across borders to assure that all individuals can exercise their rights to productive, healthy, and happy lives, especially those who can only do that with additional supports.