Kelie Hess is the program coordinator for the Utah School to Work Interagency Transition Initiative at the Institute for Disability Research Policy and Practice in Logan, Utah. She may be reached at kelie.hess@usu.edu. 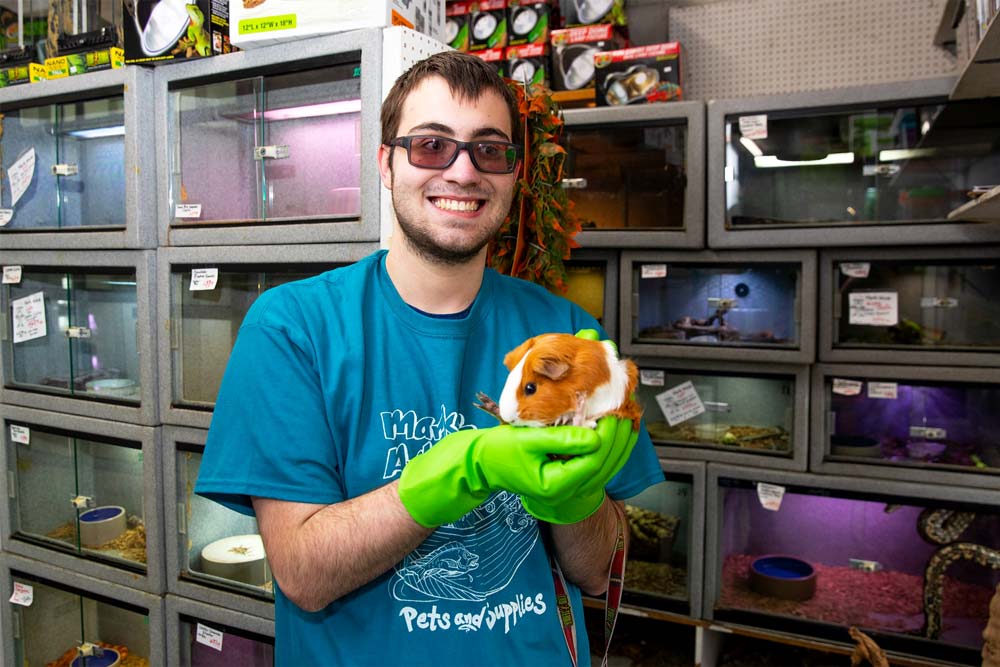 A love of animals and a career discovery process led Tate Anderson to a job in which he thrived.

Tate Anderson, who experiences significant developmental disabilities, did not have a clear path to employment when he reached transition age. Although he had an interest in working, he recognized that he needed a customized approach to employment exploration in order to find an ideal job and work environment that best fit his unique abilities and ideal conditions for successful employment. Tate was referred by his vocational rehabilitation (VR) counselor to a supported employment services agency for discovery.

Through discovery, it was learned that Tate has a strong theme for animal care. Once discovery was completed, a youth service coordinator in a Workforce Innovation and Opportunity Act program and an employment specialist from an agency serving adults with disabilities coordinated to set up an internship opportunity at Mark’s Ark, an exotic-pet shop. The employer and supervisor at Mark’s Ark let Tate try different job tasks and soon identified the tasks that needed to be done that closely matched Tate’s abilities and interests. During this internship experience, the employer for the wages that Tate earned. Through VR funding, Tate received job-coaching services during the time of the internship from the adult provider.

Tate’s responsibilities included handling the animals when they need to be removed from their cages for cleaning, cleaning of the cages, assisting with snake molting, and Tate’s favorite task of feeding the animals. He fed grubs and crickets to the reptiles, and loved watching all the animals eat! Because the job tasks were personally meaningful to Tate and the work environment was such a great match, Tate worked independently and far beyond the expectations that his family, educators, and service providers initially had for him.

Tate did remarkably well with his job responsibilities while he was participating in the temporary work experience and job coaching was able to phase out significantly. The employer was so pleased with the care and quality of the work he was doing that when the time came for the internship opportunity to end, the employer wanted to hire Tate as a permanent employee. The employment specialist assisted in the negotiations for permanent employment.

Tate worked successfully there for four years. As his skills and interests have grown, so has his desire to experience more employment opportunities. Recently, he left Mark’s Ark to pursue other employment interests, with the goal of gaining new skills. Tate’s valuable work history and success on the job may be attributed to the discovery process and the collaboration that got his career started with the blended funding of an internship.