Work as a Lifeline

Scott MacHattie, who lives with Down syndrome, works in the foodservice industry and lives with his family in Ontario, Canada. Scott is featured on FSNE’s website at www.fsne.ca/self-advocates/.

Ross MacHattie is Scott’s father and lives in Ontario, Canada. 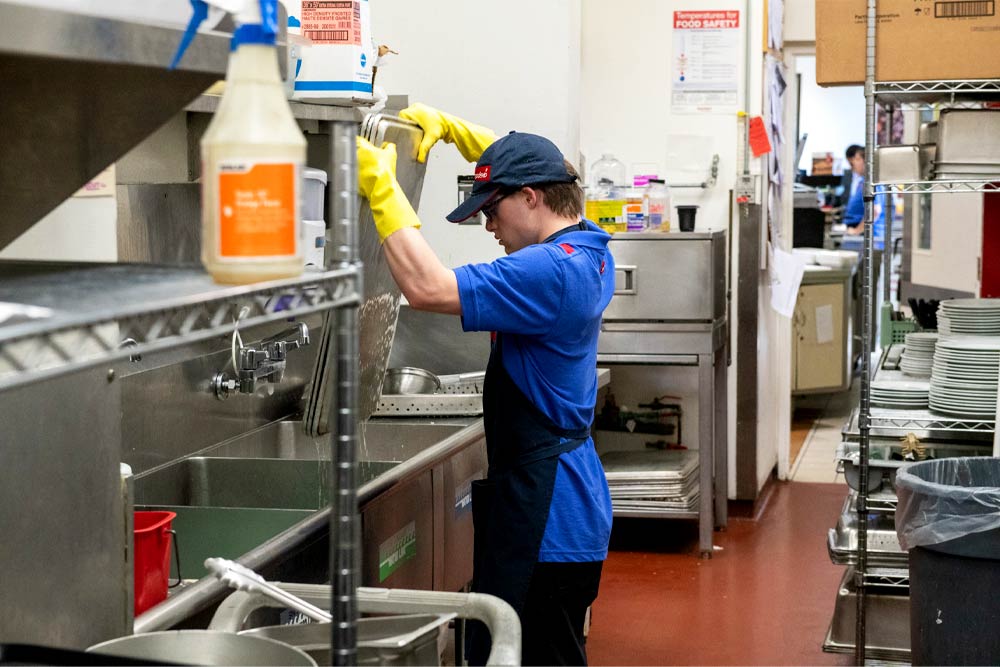 Scott MacHattie at work in the cafeteria of a large scientific company in Ontario, Canada.

Ross: Our lived experience, and that of other families, has helped shape FSNE. As we began the transition experience, we tried things that didn’t work and some that did. We learned wage subsidies don’t work because many employers simply cut jobs when the subsidies end. Having a job coach in perpetuity is of no use, either. There are many modes of failure.

Working for Sodexo in the cafeteria of a large scientific company has been hugely important to Scott. Many of his peers are not employed, so they have to find day programs that are expensive and don’t provide individual growth. Because he’s working, we don’t have to look at that option at all, and his sense of pride and accomplishment keeps him a happy, functioning person. He is pleasant to be around, brings in some money, and helps around the house, just like the other members of the family. During the pandemic, Scott’s peers who did have jobs mostly lost them, but luckily Scott was able to keep his. One of the things I like to think was a good indicator of his work ethic is that the company did have to have layoffs, but he wasn’t cut. They trimmed his hours, but kept him on. I thought that was absolutely marvelous.

Scott: I have a passion for this work. I love the routine and knowing what I’m supposed to be doing. I manage three sinks and an industrial dishwasher, plus doing the recycling.

When I finished high school, I applied to Humber College in cooking and culinary arts, and now I go to work at Sodexo every weekday. When I first started, I had a [job coach] every day. Now she just helps me [about once a month], showing me the new things that I need to do, but at first, she showed me lots of different jobs. She showed me how to do things and was good at talking about what to say to co-workers. She knows about leadership, eye contact, respect, and staying open to new ideas.

Ross: Another thing she did was to teach Scott how to interact with the various customers, coworkers, supervisors, and managers he comes in contact with each day. It’s a small team, but understanding how to take direction from everybody trying to help is an important skill, and so is teaching his co-workers how best to communicate with Scott. He’s been there 4 years now, and he’s been doing the job on his own for about 2 years. Before his current position, he worked at a pizza place, and a large grocery chain. The pizza place was only looking for a wage subsidy, and the grocery chain had a zero-tolerance policy when he made a mistake in judgment. Another mode of failure.

Scott: I want to stay working at Sodexo in the future. It’s always exciting when I get the [paycheck] envelope. I’m the only one who can spend that income. I’m saving for the future, because I like going places. I want to go to Hawaii. I want to have a pet, and here’s the other one: I want to get an apartment. Maybe, even, someday I’ll have a wife [to live with].

Ross: We’re working on an integrated housing model that would be a fully integrated community that would include 30 individuals with disabilities. It’s an exciting project, but it is going slowly.

Scott: That’s OK, Dad. I like being independent, but I also like being with family. I’ve got two brothers, Evan and Quinn. Evan is married and lives in Italy, and I went with my mom and dad to visit them when they lived in China. Quinn still lives at home and I like to stay home with him sometimes when my parents travel.