Gus Manderscheid, now in his early 30s, lives in a one-bedroom apartment a few miles from his family. He works in the community in three part-time jobs in hospitality/sports/entertainment, with some support from a job coach. He takes public transportation independently and uses car services such as Uber. He has lived in his own apartment for more than eight years now. His current home at Woodstone is in one of 11 scattered apartments, each housing individual(s) with disability in a complex of about 200 apartments. A disability support service provides shared support to each person, including Gus. His successful transition from his family home in his mid-twenties shows what is possible when you aim high and have consistent support from family, case managers, disability funding, and support services. However, Gus’s transition journey also reveals the many challenges involved, and the persistence and creativity needed to keep going successfully.

Gus attended integrated classes at his local public high school, was elected Homecoming royalty, served as a member the student council, and played soccer. After graduation, he went to a transition program for several years while living at home. He got his first part-time community job at a nursing home, where he had been doing work experience as part of his transition program. Recently, I met with Gus and his mother, Kathy, for a conversation looking back at their transition experience. 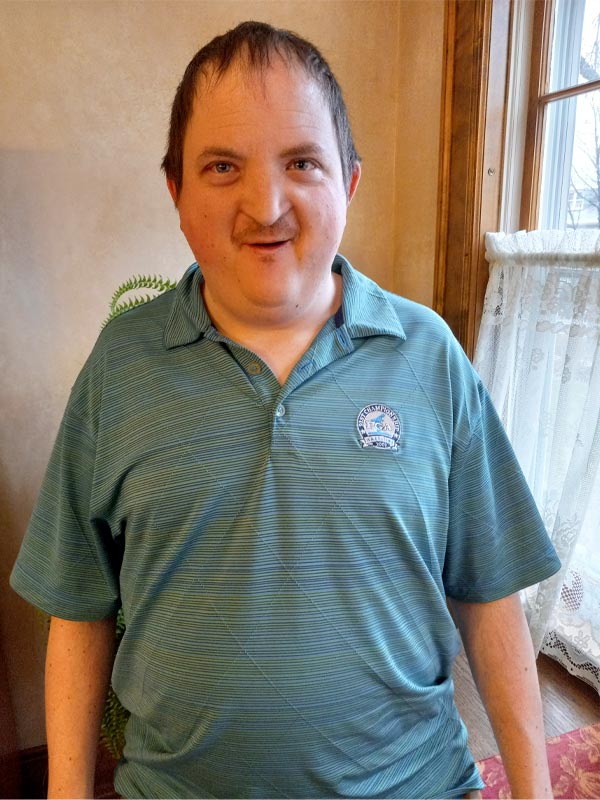 After spending time in a transition program, Gus Manderscheid moved to his own apartment, got a job in the community, and connected with new friends.

Roger: This issue of Impact is going to be about leaving school, moving out of home, getting a job, getting your own apartment, so Gus you're the perfect guy to talk to because you've done all that.

Gus: My (first) apartment was on Grand Avenue. Super, super close to my parents’ home. Like if I was still living there, I could walk here.

Kathy: My mother died young (in her early 50s). Years ago, I met a young man with intellectual disability whose mother had died recently, and he was all at sea. So, we wanted to figure out how Gus could have his own apartment and thrive beyond our lifespan.

Gus: Riley (my first roommate at Grand Avenue) and I met at the Twins (professional baseball team). He was a co-worker there and we became friends. He was looking for a spot and a roommate and to move out of his parents’ house. So, we moved in together to Grand Avenue. I would say that worked out OK, pretty good, but we were both kind of immature. [We] both had no experience. Before me, he had no experience of disability. My other roommates, they had experience with people with disabilities before me.

Kathy: With help from a county case manager, Gus was lucky enough to get waiver funding. We were told Gus likely wouldn’t qualify for 24-hour support, so we started off with a roommate model. The waiver paid the roommate’s rent. There was training Riley had to do, and paperwork to do. He got paid by the hour for specific time he spent with Gus. He had to document this on a computer time sheet, and I had to sign off on it to verify the hours, so I ended up as a “manager.” Gus also had supported living staff from an agency for support with banking, shopping, laundry etc.

Renting a nice 2-bedroom apartment was difficult because Gus did not meet the income and credit history requirements. We were helped by a rental manager who had personal involvement in disability. She pointed out that the rental company had a policy that instead of meeting the credit history/income criteria, you could pay a year’s rent in advance. We paid that and Gus and Riley paid us back through regular monthly payments that first year.

Gus: At Grand Avenue over the years, I had six roommates, one at a time. All of them keep in contact except number six. It was during the pandemic, and we were sort of stuck with each other but didn’t get along well.

Is that the main reason why you moved from Grand to where you are living now?

Gus: That’s one of the reasons. Me and my mom, we were kind of having a problem with finding roommates. I guess I wanted to have more space from this (gestured indicating his family), which I do now, where they can't come unannounced anymore. Before, they could just walk up to Grand. Now they have to give me more notice.

I kind of wanted a change of scenery, but mostly because we were having a hard time finding roommates. And the pandemic was so bad then.

Kathy: At the start, there was no agency that provided help to find roommates. We found two through a university, but the universities stopped allowing private individuals to advertise jobs, which made it harder to find roommates. This new roommate matching service came out a few years ago (RUMI https://meetmyrumi.com/). We had two good (virtual) interviews with RUMI, but the young men ended up doing other things. So, we bombed on RUMI. We concluded that, for us, after seven years, finding a roommate was not a sustainable model.

Gus: I’ve been at Woodstone now for about a year. I pretty much like it. I have my own apartment without a roommate. I’m keeping the options open (about roommates) cause there’s ups and downs with both. I have experience of both. My apartment is one bedroom. I love the staff. They’d get an A+ or an A- in my book.

So, what do you do in your free time?

Gus: At home, I like to be calling, texting, or on Facebook. I love sports so I watch sports. I like TV shows too. I like to go out. I volunteer at two performing arts theaters. I like theater, to go see plays or movies or sports. I like to go out to eat. I do have a huge sweet tooth. The Grand Ole Creamery or Café Latte are good. Or I take the bus and meet a friend somewhere.

Where do you go to shop at the grocery store?

Gus: I still make the trip over here to Kowalski’s on Grand. [My new apartment is] farther from Kowalski’s and farther from things that I’m used to. Or I go to Target, or to Lund’s in the Highland Village. Sometimes I go with Zac [my support worker]. Sometimes I like to go on my own. They’re not always available when I want to go, or sometimes I have to hear from them why don’t I get something healthy? I do some of the time, I get healthy things. Like, I love sushi and that’s healthy. Plus, if I see somebody I know at the grocery store, which happens a lot, I don’t have to be on a schedule. Staff [sometimes] say we are sort of on a schedule. And most people shop on their own. They don’t go with people. I like to go on my own. I’m not opposed, and I have gone with staff, but I have reasons why I like to go on my own.

What advice do you have for other people starting on the road to getting their own apartment?

Kathy: Starting out, I think it would help families to have a vision for what they want for their son or daughter in their own apartment. Also, it helps to not overthink the situation. We didn’t have all the i’s dotted or t’s crossed, but enough things lined up with the first roommate that it was worth trying.

Gus: I’d say find a provider like I have, Frasier, that helps you live in your own apartment. But the main thing is just go for it!