When thinking about people with developmental disabilities, the idea of power doesn’t come to the mind of most people. They are people who are weak, vulnerable and in need of help, in the view of some people. Samuel R. Mattle took the struggles of his youth and used them to become a self-advocate. He fights for putting power into the hands of people with developmental disabilities. In creating the Center for Self Advocacy, he has given western New York an agency that delivers peer-centered advocacy services. The services Sam offers are unique and regional, tailored to the needs of the community. Mr. Mattle shows us that it is possible to be qualified, assume leadership positions, and have disabilities. It's not about just having a seat at the table. It’s about being at the head of the table and showing that organizations powered by a self-advocate in the front office can directly impact change. 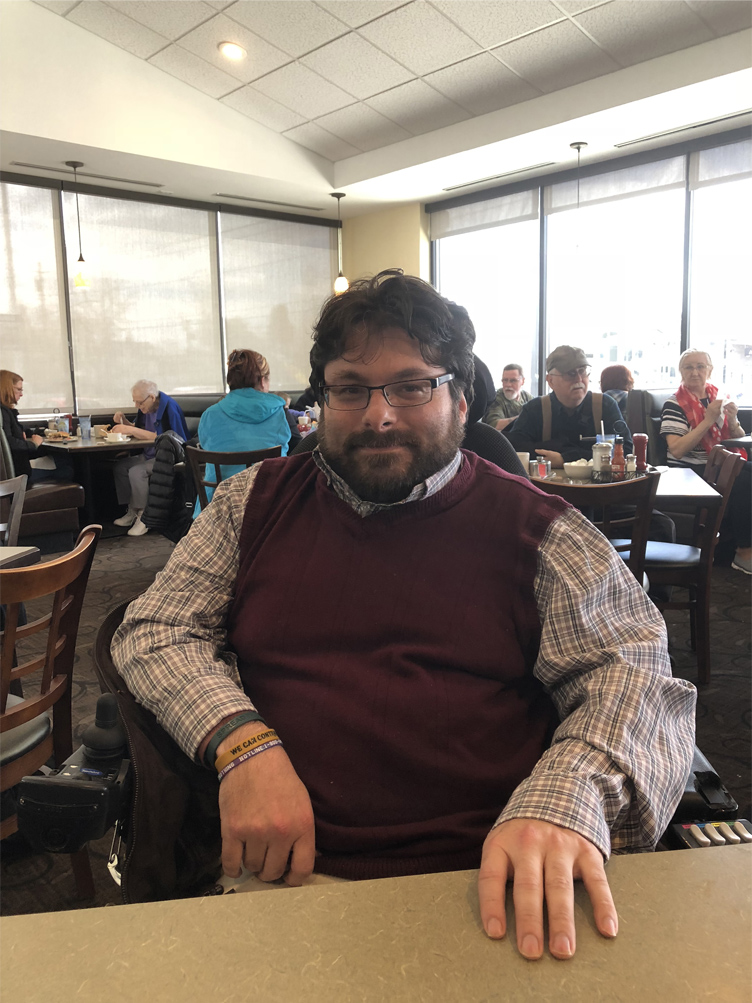 After struggling as a teen, Samuel R. Mattle built a career around self-advocacy.

Rogers: Tell me a little bit about your life growing up, Sam, and how that would shape your goal to one day change things.

Mattle: When I was younger, you know, my disability wasn't as big of a deal to me as it might have been for my family or my brother. I was young and naïve, and those times, looking back on it now, those were good times. As a teenager, 13 and on, my life was challenging. I was trying to figure out who I was and how to express myself with my family. How do I find my independence? When I was a teenager, it was all about my family wanting to protect me.

I didn't start going out on my own until I was about 16 years old. It was hard to find people who were going through the same stuff that I was and to know what we had in the community for people like us. We didn't know about [Section] 504 [of the Rehabilitation Act of 1973], the civil rights statute that requires schools to meet the needs of students with disabilities. We didn't know about the Americans with Disabilities Act, per se.

Meanwhile, I was just being a teenager, and I did things that weren't the best for me or for my family. I was trying to get away from my disability as much as I could. When I came around to accepting my disability, my family had difficulty accepting it. My dad always told me that one day I would walk, but as I got older, I knew it wasn't going to happen. My family, mostly my dad, was frustrated after everything that the medical professionals said. They said, “If Sam has these surgeries, he will walk. A lot of parents back in those days were told similar things; that if your son or daughter did this or that, then everything will be okay. The reality is, it wasn't okay. And it was very difficult for people like myself to accept who we were.

When you say you didn’t know what was lacking, how could you not know about all the options that were available under the ADA and other laws?

We didn't know because we weren't told. I'm not blaming that on schools, I blame it on the whole system. Schools were just telling my family, ‘You’re going to be taking care of him for the rest of his life, so be prepared.’ They weren't told that 504 says your son has the right to go to school just like his brother. They were told, ‘Here’s a special education program.’

How did that affect you beyond the classroom?

When I was 14, I went for an interview for a job recycling bottles. My mom, who played a huge role in who I am today, took me to the interview. Neither of us knew anything about our rights under the ADA. The interviewer showed me a step that you had to use to get to the recycling area, and if I couldn’t get over that step, they couldn’t give me the job. I was rejected based on access.

The approach is to have a person who might not have the same exact disability that you have, but they have a disability and they understand what you’re going through.

Access also played a role in your decision to live on your own at a very young age, right?

Yes. I had a lot of issues with my parents’ house not being accessible. My mom was having to do all the things she was doing for me, plus holding down three jobs. So the additional issue of being in a house that wasn’t accessible led to a lot of arguments with my dad. One day, after a big argument, I just said, ‘I’m out. I’m gone.’ I moved into an apartment. It was a blast and my friends thought it was so cool to have a place to go where we didn’t have to deal with parents. But the bad part was, I was 18 years old and had never lived alone. I had never paid a bill. I learned some life lessons that probably nobody wants to go through. I have cerebral palsy and epilepsy. A year before I moved out, I had my first seizure. So, when I moved out, I was dealing with all these new issues.

So after you got your degree, what led you into advocacy?

Well, I went through this job fair. I was a pretty good video editor, but the person basically said he didn’t think I’d be able to do the work. I heard something about the Self-Advocacy Association of New York State and that they were hiring in their AmeriCorps program, and I got the job. I was smoking three packs of cigarettes a day, my beard was long, my hair wasn’t (kept back) in a ponytail. I gave them a lot of reasons to say we don’t want this person to be hired as an AmeriCorps member, but they took a shot. I ended up learning a lot from my mentors Chester Finn and Caroll Bosley. I remember Bosley telling me to get my act together or get out. I also had a good support system at SANYS. Lyn Zyla, Jud Sloman, and Sophia Roberts all helped in my development.

Later you were doing some work on the state level, and then had an idea that you might want to make a change and build something different for people with disabilities. Tell me about that.

In 2011 I was sitting in a Starbucks with a good friend, and I said I have this idea to have a self-advocacy organization with a regional presence and I’m going to need a degree to prove to organizations I can be an executive director. So, I decided to get my master's degree in public administration. 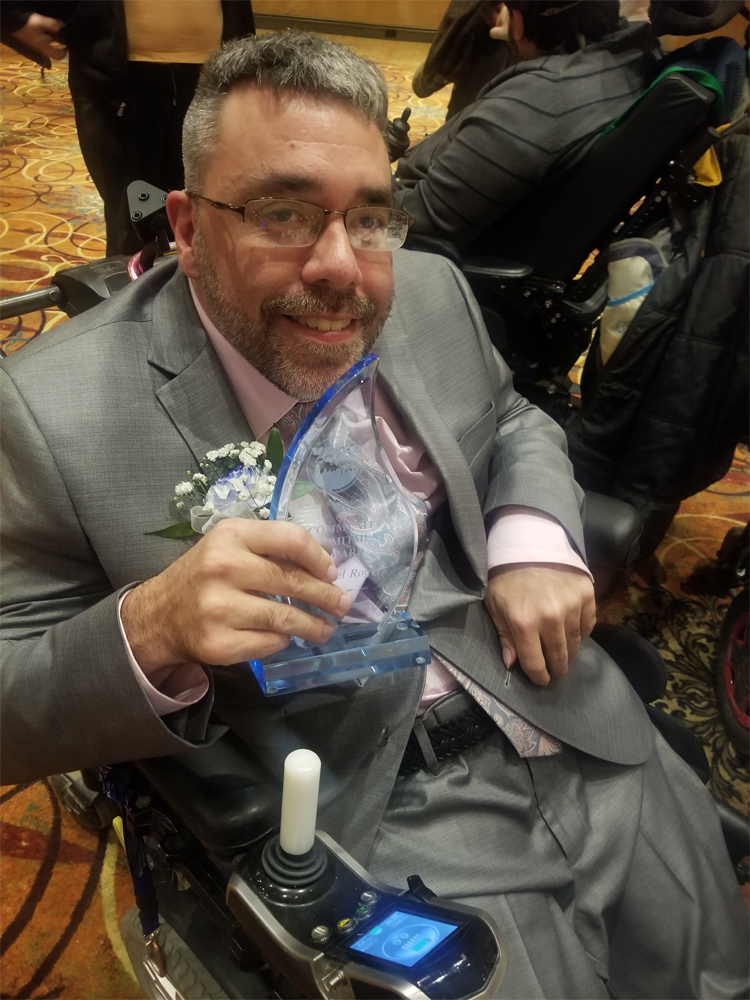 Mike Rogers interviewed Samuel R. Mattle about starting the Center for Self Advocacy.

What motivated you, specifically, to create the center?

At the time, SANYS only had two people for this region and there needed to be more voices. Not taking anything away from SANYS, but to have another organization to back SANYS up and for SANYS to back the organization up, that was my motivation.

So, what does the Center do differently today and how are employees involved?

Ninety percent of the people who work here have disabilities. About 80 percent of the board has developmental disabilities. A lot of agencies can’t say that. The Center provides peer-to-peer support for young adults and a variety of training programs. The approach is to have a person who might not have the same exact disability that you have, but they have a disability and they understand what you're going through. They’ve been through the same struggle.

How is CSA building future leaders?

We go into classrooms and teach self-advocacy skills and how to get support. I can tell you right now COVID-19 makes it more difficult because prior to that we had five peer support groups going once or twice a month; some, every week.

What areas of advocacy do you think need innovation?

The funding model is one. Writing grant after grant – and having to cut staff when they end – isn’t productive. I think the federal government should fund self-advocacy organizations like they fund independent living centers, especially if they’re peer-based organizations, because they need funding.