Julia Bascom is Executive Director of the Autistic Self Advocacy Network. She may be reached at jbascom@autisticadvocacy.org.

The Autistic Self Advocacy Network (ASAN) is run by and for autistic people. We believe that autistic people, and people with other intellectual and developmental disabilities, can and must be in charge of all decisions about us. We can take charge of our own lives, shape policy discussions, and run our own organizations.

Our corner of the disability community is called the neurodiversity movement. We believe that brain-based disabilities like autism, intellectual disability, and dyslexia are a normal part of the differences between people. Autism should be accepted and supported, not taken away from us. We’re proud to be part of the Self-Advocacy Movement and we recognize our organization is only possible because of the work of self-advocates with intellectual disabilities who came before us. When we fight for equal access, rights, and opportunities, we are fighting on behalf of our whole community. ASAN’s board, staff, and membership include non-speaking autistic people, autistic people with intellectual disabilities, and autistic people who cannot live independently and need varying levels of support. It also includes autistic people who struggle with self-injury or aggression, institution survivors, and autistic people with additional disabilities and many other experiences. We do not label people as “high” or “low” functioning. We recognize the worth and dignity of all people, including people with the most significant impairments. We believe that civil and human rights, inclusion, and self-advocacy are for everyone.

ASAN was founded in 2006 because autistic people were not included when professionals and policymakers from around the United States were talking about autism. We were absent from the leadership of other autism organizations, many of which were promoting stereotypes, fear, and hatred of autistic people and our disability. We became widely known in December 2007 after a letter-writing campaign led to the removal of the “Ransom Notes” billboards in New York City. These billboards compared autism and similar disabilities to a kidnapper snatching children from society. In 2011, we became a nonprofit and began receiving grants and hiring staff. In 2012, we worked with researchers to improve the official definition of autism. 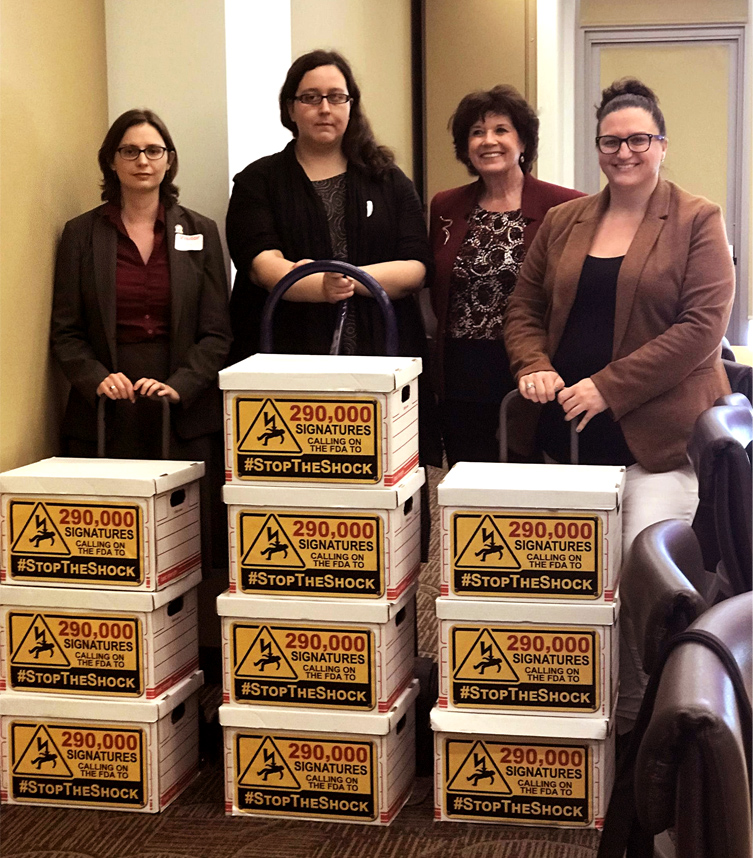 In 2018, ASAN and allies delivered 10 boxes of petitions to the FDA demanding they ban the use of electrical stimulation devices on people with disabilities. In March 2020, the FDA issued a final rule banning the devices.(from left) Sam Crane, Julia Bascom, Nancy Weiss, Nicole Jorwic.

Since then, we’ve done a lot.

We are most interested in using policy and legal advocacy to remove structural barriers. We ensured self-advocate voices were heard when the federal government was preparing the Home and Community-Based Settings Rule. This rule sets basic standards and protects rights of people who use community services. We fought to protect the Affordable Care Act and save Medicaid in 2017, and we’ve been challenging discrimination in health care since 2013. After years of advocacy, our #StopTheShock campaign helped the FDA decide to ban the use of electric skin shock to torture disabled children and adults at the Judge Rotenberg Center. We have helped bring supported decision-making to the United States. We’re now focusing on access to effective communication technologies and strategies. We’ve challenged the current autism research agenda and its strong focus on causes and “prevention” of autism. We prefer people to focus on the issues that matter to autistic people. We’ve shaped legislation about employment, services, higher education, and more. We have offered autism and disability rights training across the country, and spoken before the United Nations. Every day, we are fighting to make the world a fairer and more inclusive place.

Our guiding principle is self-determination. To create and sustain cultural change, we have to build a movement of skilled, passionate self-advocates and allies. Such a movement can transform communities.

The autistic self-advocacy community was born online in the 90s. The first groups began talking to one another, identifying a shared label, and organizing. For many autistic people, the internet offers a better way to communicate than face-to-face meetings. Communication doesn’t need to happen right away; you can take as long as you need to think about a message and the best way to reply. Body language, facial expressions, and other barriers are eliminated, and sensory overload is more easily managed. In many ways, this allows us to spread our message well beyond our local communities. We challenged what everyone else was saying about autism in powerful and disruptive ways.

Not all autistic people have access to online communities. Autistic people who also have intellectual or speech disabilities, and those who live in group homes or other institutions, might not have the support needed to go online or they may be closely monitored. Over the last decade, autistic advocacy has grown to include opportunities that do not require using the internet. We need to build better partnerships with local self-advocacy groups led by people with intellectual disabilities in order to truly bridge this gap.

We help everyone see the amazing work our community does via social media. A great example of this is Autism Acceptance Month. For several years, April has been designated by parent-led autism organizations as Autism Awareness Month. It promoted stereotypes about autism that frightened the general public. Self-advocates pushed back, declaring April to be Autism Acceptance Month. They created websites, flash blogs, parodies, and more to change how people thought about autism. ASAN created resources to educate the general public and challenged our allies to take action.

In addition to protests, ASAN now also holds an annual gala and celebration of self-advocacy. We lift up outstanding work, award self-advocates and allies fighting for our community, and lay out our vision. We publish position statements and work with journalists to amplify our voice.

Our guiding principle is self-determination. To create and sustain cultural change, we have to build a movement of skilled, passionate self-advocates and allies. Such a movement can transform communities.

We also use email and social media to publish action alerts and we hold training sessions on community organizing. This year, we’re focused on making sure that our members are registered to vote, know their rights, and are prepared for the ballot box.

Much of our policy work is done in partnership with other disability groups, because a person’s most basic rights do not change depending on the nature of their disability. Over the past few years, we’ve begun working together with other civil rights groups outside of the disability community. Our policy focus on self-determination is shared with many other communities who are left out, and our own community includes autistic people and people with IDD of all religions, races, genders, sexualities, immigration and socioeconomic statuses, and more. We are strongest when we stand with other groups.

Our opponents want nothing more than to split our community. They will promise autistic people who can speak or live independently all the respect in the world, as long as they agree that autistic people with more intense needs should not have the same civil rights. But we know better: We must always refuse that devil’s bargain.

At 14, our organization is like a transition-age person, looking towards the future. We have changed the way autism is talked about in our society. Not perfectly, not all the way, but the balance has shifted. That’s the first step. We’re working hard on the rest.