Mary Kay Kennedy is Executive Director of Advocating Change Together in St. Paul, Minnesota. She may be reached at kennedy@selfadvocacy.org

Cynthia Gayles is the Vice President of the ACT Center Board of Directors and lives in St. Paul, Minnesota.

The Olmstead Decision Explained A plain-language guide to the Olmstead decision, a landmark court case granting people a right to receive services in the community instead of in institutions.

The U.S. Supreme Court Olmstead Decision of 1999 is a federal mandate requiring community inclusion for people with disabilities. Using the values and concepts in the Minnesota Olmstead Plan, ACT Center for Disability Leadership has developed a program to support individuals in becoming community leaders and making change within their communities. 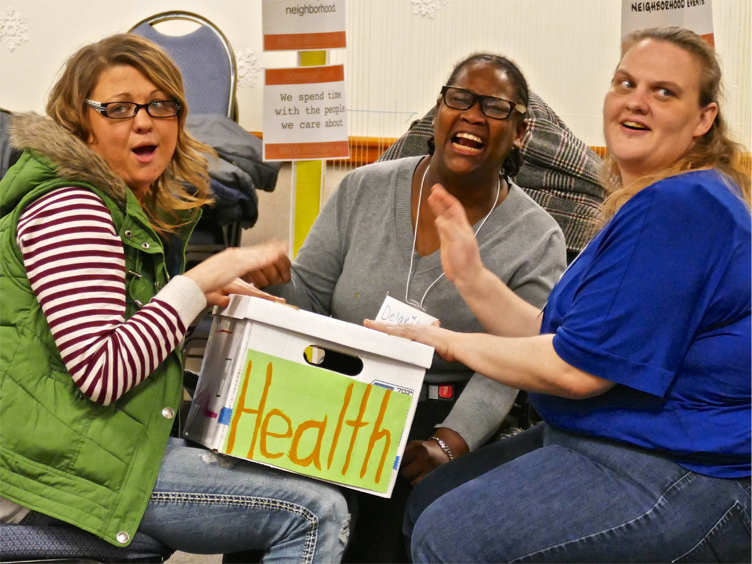 If you've been involved in disability rights work for a while, maybe you've noticed that simply letting people know they have rights doesn’t do much. Our friend Dustin Anderson said, “If all you know is cheese pizza, that’s all you order.”

At the ACT Center, we’ve noticed that the word "should" has little power. Sure, people should have the right to invite a friend for dinner, or attend a synagogue across town, or go out for a beer with a friend. Simply informing people that they have a right is only a small first step. The ACT Center works on helping people take the next big step. Our work is centered on the difference between the rights people have and that they know about, and the rights they are able to exercise. We create a desire and an expectation of inclusion, support and respect. Then we act, together with others in the community.

Over many years, the ACT Center has learned what it takes for people with developmental disabilities to become disability rights activists who can make change happen. It takes working with people in small groups over extended periods of time.

A few years ago, Katie, a young woman new to the disability equality movement, began participating in ACT Center workshops and retreats. Once she built a relationship with other self-advocates and allies, she began to tell her story. This took many months. One part of her story included the fact that her parents and siblings sometimes called her a “retard.” She felt powerless: “Technically they are right, so what can I say?” Over time, Katie built the skill, gained the support she needed, and confronted her family. Today, her relationship with her family has improved and she calls herself a disability rights activist.

The Act Center has learned what it takes for people with developmental disabilities to become disability rights activists who can make change happen.

Then, of course, came the pandemic.

The teams are now meeting via phone, Zoom, FaceTime and other platforms to foster integration projects that do not include getting together in person. One team is interested in creating a movie club. They will invite people with and without disabilities to watch movies, followed by a virtual chat. Two of the teams are interested in inviting local leaders to virtual meetings for informal chats. They will host chats with their chief of police, mayor, city council members, and other local officials and leaders. Other ideas include hosting virtual parties, exercise or meditation clubs, phone bank check-ins, storytelling on the order of the Moth Radio Hour, or a learn-something-new club.

The key to this power that we’re seeing from self-advocates is the structure of the program. We build relationships, use existing relationships among team members, and work over the long haul. We use multiple, inclusive methods (no power points!). People are working on changes self-advocates want for themselves while helping their peers reach the same goal. We’ve found that the most successful training requires establishing a culture that includes music, art, stories, laughter, hugs, theater, lots of movement and BIG visuals.

It also includes this basic message: It’s your life, and it’s what you make of it that matters. To make the most of it, we can’t just keep to ourselves. We have to widen our circle, reach out to people in the community, and get to know them. At the Academy, we often talk about what “Side by Side” means. Some of our participants have said:

“Being out in the world without being told what to do.”

“Spreading the word about the benefits of having friends who are different from me.”

“Making connections with others.”

ACT’s Olmstead Academy is an investment in leadership in the disability community. Lead funders include the Minnesota Department of Human Services and the MN Governor’s Council on Developmental Disabilities. Additional funds to support the Academy come from ACT Center earned income, philanthropic support and individual donors.

The changes in Katie’s life were not the result of a single training or interaction. They happened in the context of a small group of people learning and sharing together, over a long period of time.

In our newest program, the ACT Olmstead Academy, we've put these ideas into a year-long training format. Twenty-one people promise to work together, learn about rights and work on a project that helps people with disabilities become more included in their community. The program starts with eight days of classroom learning about leadership and how to make real change in communities. The participants then spend nine months working on Disability Inclusion Projects. Participants enroll in the Academy as teams of three, with two self-advocates and one ally from around the state. Each team develops and implements a six-month project in their own community.

As a 2019 participant in the Academy, I (Cynthia) became strong enough to speak up and say, “Hey, this isn’t right,” when I need something to change. We learned about other self- advocates and what they did to improve their lives, and we learned about speaking out to legislators and the public. Through our inclusion projects, we brought people with disabilities together with people without disabilities and they all had a great time out in the community.

For the last six years, projects like these have set the stage for hundreds of people with and without disabilities to work and play side-by-side, building more inclusive and stronger communities across the state. Projects that might seem small have led to profound results. A Coffee With Neighbors project led to people getting rides to church. A Dinner With Town Leaders project led to new volunteer gigs at the local nursing home. A Learn to Use Uber project led to new independence in participating in town life.

The 2020 Class of the ACT Olmstead Academy offers a look into the creative energy and leadership we experience with this program. Beginning in January, seven teams have been working to develop their project ideas—hosting picnics in the park, joining community education classes, volunteering with local Kiwanis Club, side-by-side bowling leagues, getting to know some neighbors, tours of homes and tours of jobs.