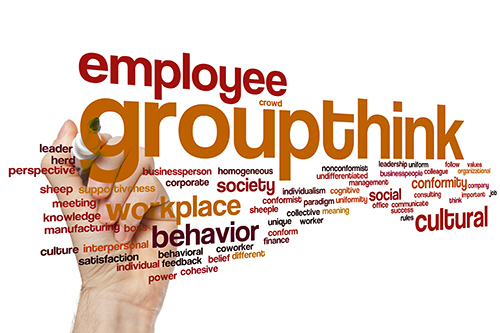 Asking other people to provide feedback and opinions about how person-centered and positive support practices are implemented helps to reduce the likelihood of Groupthink. The term Groupthink is used to describe something that happens when one or more people, in this case a team, makes decisions in a way that are driven by the need to avoid disagreements or judgment.

Studies have shown that people tend to prefer individuals who are most “like” themselves and may seek out group norms that reinforce similarities and avoid disagreements or tension.  Certain ideas and opinions are valued by the dominant group while disagreements or criticism are ignored from people who are not considered part of this group. There are times when those in the largest cultural group may know each other well.  Because of this they may be comfortable making decisions together.  They may become more convinced their view is always correct and that there won’t be any challenges. This group of team members often seek consensus among the more dominant group while ignoring alternative opinions that does not conform to their values.

Groupthink can result in teams not making the best decisions because they ignore new ideas. Often those new ideas are contributed by people they consider to be “outside” of the main group who often share a similar viewpoint. Over time, teams using groupthink become more isolated and tend to rely on their own opinions and ideas while discounting the viewpoints from outside influences. Value judgments are made by the group without taking into consideration the fairness of how decisions being made are for all people involved. When this happens, there are fewer new, different and creative ideas are shared because of groupthink discourages them.  The Module 7 Resource Page

Groupthink can contribute to racism in today’s society. For instance, a team of people representing a dominant cultural group may ignore signals that people representing a smaller subgroup are being treated unfairly. A team that uses groupthink does not seek out opinions from people outside of this main cultural group. They change the subject if a person with a different viewpoint brings up problems or concerns. Ignoring problems decreases tension during the meeting among the main cultural group. It can be difficult for people who are not a part of the main group to try to convince the people who are engaging in groupthink that there is a problem.  Teams with groupthink are seeking consensus and harmony in the conversation. They tend to put pressure on people to suppress ideas that do not confirm to this view. When a conversation becomes uncomfortable because someone has call attention to an action that appears unfair or biased, another team member influenced by groupthink may redirect the conversation or make a statement that explains away any racist actions.

Recruiting someone outside of the organization to complete a fidelity of implementation tool is a good place to start ensuring groupthink does not impact your team.

Use the HCBS Planning Tool to talk about groupthink as it applies to HCBS. Think about ways to partner with other providers in your region. Are there people you know in other areas of the state using person-centered practices? How might your team think about an external evaluation of your work.