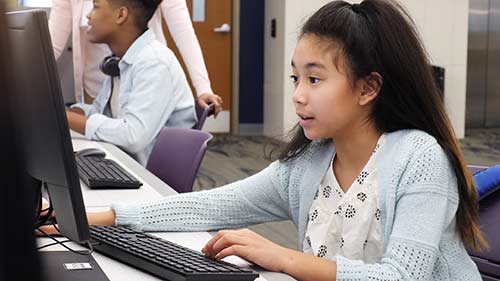 What is word prediction? Word prediction is software that suggests words and supports written communication. A predictive word suggestion or list appears when initial letters of a word are entered. Depending on additional features in word prediction software, words may be suggested based upon typing patterns (Evmenova et al., 2010; Sitko et al., 2005).

What are the research findings on who should use this accommodation? Students with challenges with spelling or word recall (Cunningham, 2013, Evmenova et al., 2010, Silió & Barbetta, 2010), as well as students with physical disabilities who have challenges in typing ((Mezei & Heller, 2012) may benefit from using word prediction. Older students who are able to navigate a word prediction program may find it more useful than younger students (Silió & Barbetta, 2010). Some former English learners with disabilities may also benefit from this accommodation (Silió and Barbetta, 2010).[2]

What are the research findings on implementation of word prediction? Four studies were located that addressed word prediction. All of them examined issues related to using word prediction as an accommodation. Two studies focused on students who had difficulty with spelling or written expression (Cunningham, 2013; Evmenova et al., 2010), one considered students with physical disabilities (Mezei & Heller, 2012), and another concentrated on Hispanic students with learning disabilities, some of whom were former English learners (Silió & Barbetta, 2010).

Research on word prediction summarized here is also available in NCEO’s searchable Accommodations for Students with Disabilities Bibliography and in NCEO syntheses of research from 1999 through 2018 (see summaries for: 1999-2001